One of the most colourful little scenarios that used to take place each teatime at The Stair throughout the summer evenings in the 1960s was the sight of the drum major who practiced throwing and twirling the regiment's mace at the side of 4 Oxgangs Street in what was the wee field. Looking back he was probably appearing at the Edinburgh Tattoo up at the castle later on in the evening. 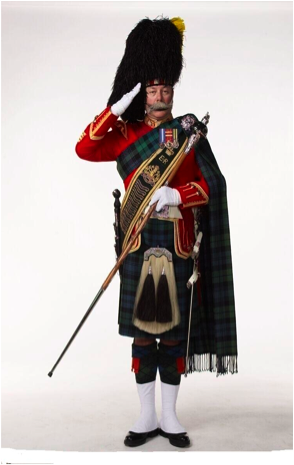 The easiest way to learn to juggle is to stand quite close to a wall, so perhaps that was why he stood so close to the building when he practiced his art.

Whilst we were in the living room at 6/2 Oxgangs Avenue eating our beans on toast and watching Robin Hood on the telly, for quarter of an hour or so, he used to go through his whole repertoire. He was quite amazing to watch as the mace weaved its way through his hands, especially given the size and weight of it - it must have been around six foot in length. 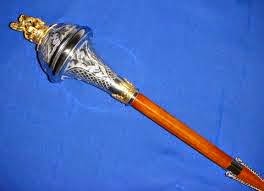 The routine began in a slightly conservative way with the mace at a diagonal across his body.

Then it would begin to wend its way through his hands, twisting its way from side to side and round and round followed by the mace spinning on its axis through the air.

After some cycles it would then fly sky-wards up into the air and as it dropped down he would deftly catch it.

Sometimes he might pause with the mace held horizontally under his nose, but mostly there was almost constant movement unless he made such a dramatic pause; then the cycle began once again, yet he never seemed to move from the one spot, unless he did some stationary marching.

He was incredibly efficient and minimalist in his movements, indeed the only part of him which appeared to move most of the time were his hands and lower arms.

As he completed each cycle, the mace would be thrown higher and higher into the air until it was at around stair level two.

The performance would build and build until the mace was heaved high into the air which signalled the dramatic end to a truly mesmeric and dazzling performance.

In all the years of witnessing him practice I never ever saw him drop it - well if he had it was probably a court martial offence, plus I suspect he took a real pride in his craft!