St John's Church-For Whom The Bell Tolls, It Tolls For Thee-An Update and a Special Church Service, 24 November, 2013 On the last day of December, 2013, the St John's Church, Oxgangs church bell will ring out one more time before becoming silent. 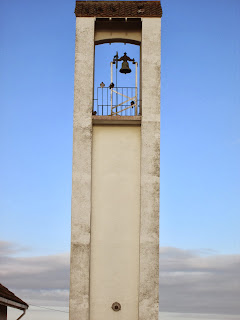 Last Sunday on a beautiful sun-kissed, mid-November morning I stopped by to hear the bell ring out for perhaps the very last time for me.

It was a still and frosty morn.

I walked the 360 degrees around the church and the old church hall and then entered the Narthex or vestibule inside St John's and unobserved, watched an elderly church warden making ready for the church service. 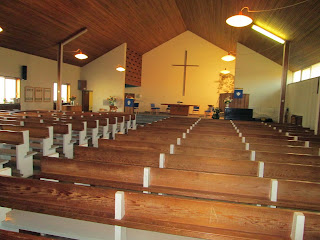 The gentleman wore a jerkin and cloth cap, but was as tall and erect as a (old) soldier. He walked up and down the side aisle; at one stage he carried a kettle; and then some plates and also some other objects. 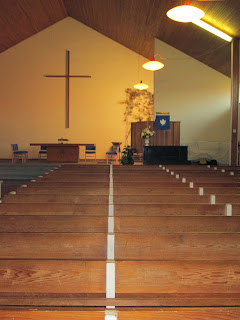 Previously he had laid out the Order of Service at the front door of the church. 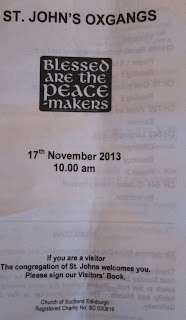 And all the while as he performed his duties he sang to himself.

He was oblivious to me standing there. And whilst he had a good voice it could be better described as a happy voice.

His happiness and joy could be heard in that voice.

He was at one with himself.

It was clear these were not really duties for him, He was so happy in making a contribution.

I recalled the Latin phrase - ora et labora - to work is to pray.

It turned out that he was the church bell-ringer too - who says men can't multi-task!

The church bell rang out five minutes before the service commenced, ringing out, calling the parishioners to worship.

The elderly gentleman then emerged from the door of the bell tower and glided up the path to enter the church by a side door to join the congregation.

There was a feature on BBC Radio 4 the other morning saying Christianity in the United Kingdom may be dead in a generation. My visit brought this home. 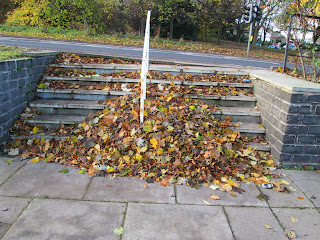 Shortly before the service began I spoke at the top of the steps on Oxgangs Road North to a lovely and very pleasant older lady.

I mentioned that as I was in Edinburgh I was keen to hear the sound of the St John's Church bell ring out one last time and to record it for posterity. 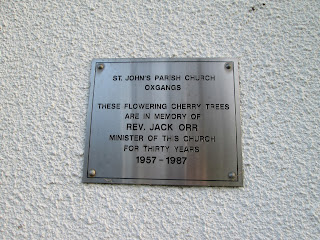 We exchanged some memories of times past. 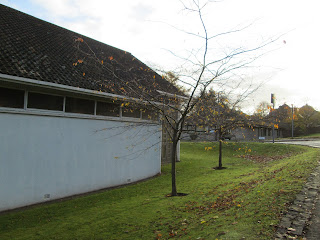 She has attended St John's for many decades, indeed since she first lived at Redford at the army houses back in the 1950s. She pointed out to me another parishioner who had attended the church each Sunday since St John's first opened in 1957, the year after I was born. 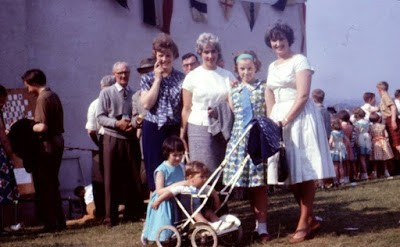 I spoke of happy memories of the annual summer fetes and the marvellous contribution made to the Oxgangs community by the Orr family - the Reverend Jack Orr and his wife who had taught at Hunters Tryst School, also sadly no more.

The lady spoke to me about her sadness about the church closing on Auld Year's night and the challenges of joining up with Colinton Mains Church and how very good the incumbent minister, the Rev Iain Goring has been.

She became quite emotional and I held her hand. 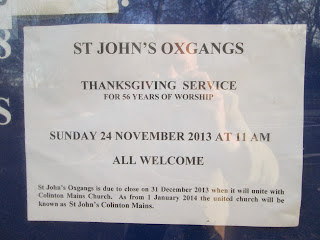 On a note of serendipity, she told me that next week, the Rev Orr's daughter, the Rev Dr Kathy Galloway, will be a guest preacher at a special church service (Sunday 24 November, 2013 at 11.00 a.m.) to celebrate the church's existence in Oxgangs, to be followed by a lunch in the church hall.

Whether one is religious or not it's perhaps something to consider for anyone interested. Special occasions should always be acknowledged and marked.

John Donne has been mentioned by me before, particularly on a blog about the end of our school days at Hunters Tryst. And once again the sound of a church bell ringing out signifies something important; for when Donne spoke of 'For Whom The Bell Tolls, It Tolls For Thee', it does indeed because when something dies, we all die a little; I guess what Donne was really saying was that whatever affects one, affects us all....
Posted by Peter Hoffmann at 22.11.13

A well written piece Peter, again the memories came flooding back especially when I saw the photos.
I am scared to admit that under the second row of seats my initials may still be scratched into the wood a sign of a misspent youth or a dare I cant remenmber.

It is ironic after all the publicity given to Colinton Parish church over the R.L.S statue that another icon of the area St Johns is near the end of its tether.

All the better off locals used to go to Colinton church those who were able to afford to live in the area, Colinton was quite an exclusive scheme back in the 50,60s and the more working class stayed in the council scheme eg Oxgangs the main advantage living in Oxgangs was we had a pub and a bookies they had a better address.

I knew a few teachers at Firrhill Secondary who stayed in the Colinton area ,I cant recall any staying in Oxgangs.

Do you re-call the pour-oots the newly weds used to toss to eager bairns fighting each other for the best spot nearest the bridal car? the photo of the stairs strewn with Autumn leaves reminded me that a surprising amount of money used to end up at the bottom buried under the debris that used to collect in the centre as in the photo , some times if you were really lucky and the conditions were right you were able to see two mini tornados swirling the leaves about

The amount of money that used land on the main road was unreal Health & Safety would be in their glory if that happened to-day, the danger of being born in the 50s is that I think we had more common sense than the generation of
to-day ,you had to just to survive ,a skelp on the lug is a good teacher so is a weeks grounding especially if the schools were mid term.

I also remember after the pour-oot the queues in Ewarts the
sweetie shop full of kids who couldnt wait to be parted from
our pocket full off halfpennies, pennys threepenny bits and silver sixpences ,I remember once getting a two bob bit and thinking all my christmases had come at once ,in those days
you could get a 16 bus to Morningside then get into the Dominion picture house to see the latest film (in my case it was Goldfinger)and buy a cone for about 5 shillings "25p"to
the younger ones then get home and still have change.

It will be sad to see the demise of St Johns even though I moved away in 1975 I still have very fond memories and that is something that cant be taken away, I will be at the service to-morrow, and also get some more photos to go with the ones I took at Hunters Tryst or what was left, I wonder what the next part in Oxgangs to vanish will be ,is the air raid siren at the 27 bus terminus still there ?.

Thanks for your fascinating blog, evoking so well the story and spirit of Oxgangs in the 1960s and 70s. It has been particularly touching to read your reflections about St John's church, and especially your very kind words about my dad Jack and mum Janet Orr. As you note, my sister Kathy preached at the service last Sunday (and she quoted a wee bit from your blog!) I was there too, along with our brother Callum (whom you remember was also an athlete, and is now a headteacher in Loughborough). My husband Peter Macdonald, and Callum's son Colin were also there to represent the extended Orr family. (Brother David lives and works in London and wasn't able to be there). It was a lovely occasion, and of course a day of mixed emotions for us. I still live near Edinburgh, and have revisited St John's on occasion over the years. There are still many old (and getting older...) familiar faces who have been in Oxgangs since the early days, and there is always such a warm welcome from these good friends. People remember my parents with such love and enduring affection - and it means a lot to us to read about the positive impression and impact they made on folk who were not directly involved in the church.
Apart from the emotional connection I feel with the building, which holds so many happy memories, and which has been the space where so many significant markers in my life happened (I was the first baby baptised in St John's - in the hut which was used before the Riach building was opened - and was married there too) I love the clean and elegant lines, the combination of warmth and light, the fantastic chancel space. It speaks so eloquently of the spirit of optimism, hope for the future, participation of all, and community building which characterised the best of Oxgangs in the 1960s and 70s - and which your blog also captures.

I certainly remember the pouroots, the church fete, concerts and so much else...Keep on sharing the stories and pictures!

Before installation of the bell there was no door on the tower. Being a daft laddy of 7 off I went up rungs on the inside. Nae health an' safety then!