TO THE PENTLAND HILLS from Edinburgh: Picturesque Notes by Robert Louis Stevenson 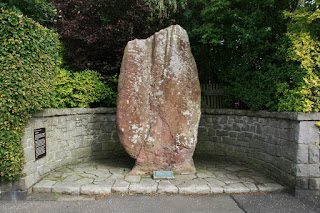 The country people call it General Kay's monument.
According to them, an officer of that name had perished there in battle at some indistinct period before the beginning of history. The date is reassuring; for I think cautious writers are silent on the General's exploits. But the stone is connected with one of those remarkable tenures of land which linger on into the modern world from Feudalism.Whenever the reigning sovereign passes by, a certain landed proprietor is held bound to climb on to the top, trumpet in hand, and sound a flourish according to the measure of his knowledge in that art. Happily for a respectable family, crowned heads have no great business in the Pentland Hills. But the story lends a character of comicality to the stone; and the passer-by will sometimes chuckle to himself.
The district is dear to the superstitious. 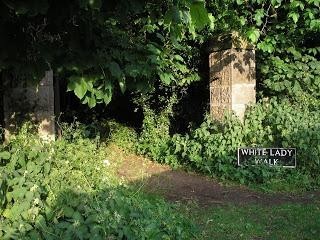 Hard by, at the back-gate of Comiston, a belated carter beheld a lady in white, 'with the most beautiful, clear shoes upon her feet,' who looked upon him in a very ghastly manner and then vanished; and just in front is the Hunters' Tryst, once a roadside inn, and not so long ago haunted by the devil in person. 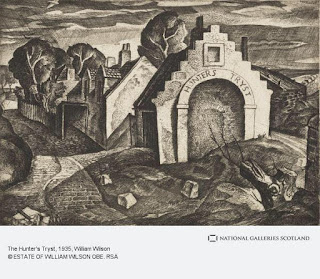 Satan led the inhabitants a pitiful existence. He shook the four corners of the building with lamentable outcries, beat at the doors and windows, overthrew crockery in the dead hours of the morning, and danced unholy dances on the roof. Every kind of spiritual disinfectant was put in requisition; chosen ministers were summoned out of Edinburgh and prayed by the hour; pious neighbours sat up all night making a noise of psalmody; but Satan minded them no more than the wind about the hill-tops; and it was only after years of persecution, that he left the Hunters' Tryst in peace to occupy himself with the remainder of mankind.

What with General Kay, and the white lady, and this singular visitation, the neighbourhood offers great facilities to the makers of sun-myths; and without exactly casting in one's lot with that disenchanting school of writers, one cannot help hearing a good deal of the winter wind in the last story.

'That nicht,' says Burns in one of his happiest moments,-

'THAT NICHT A CHILD MIGHT UNDERSTAND
THE DEIL HAD BUSINESS ON HIS HAND.'

And if people sit up all night in lone places on the hills, with Bibles and tremulous psalms, they will be apt to hear some of the most fiendish noises in the world; the wind will beat on doors and dance upon roofs for them, and make the hills howl around their cottage with a clamour like the judgment-day. 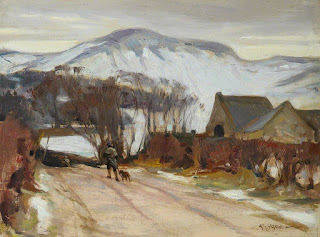 The road goes down through another valley, and then finally begins to scale the main slope of the Pentlands. A bouquet of old trees stands round a white farmhouse; and from a neighbouring dell, you can see smoke rising and leaves ruffling in the breeze.

Straight above, the hills climb a thousand feet into the air. The neighbourhood, about the time of lambs, is clamorous with the bleating of flocks; and you will be awakened, in the grey of early summer mornings, by the barking of a dog or the voice of a shepherd shouting to the echoes. This, with the hamlet lying behind unseen, is Swanston.

The place in the dell is immediately connected with the city. Long ago, this sheltered field was purchased by the Edinburgh magistrates for the sake of the springs that rise or gather there. After they had built their water-house and laid their pipes, it occurred to them that the place was suitable for junketing. Once entertained, with jovial magistrates and public funds, the idea led speedily to accomplishment; and Edinburgh could soon boast of a municipal Pleasure House. The dell was turned into a garden; and on the knoll that shelters it from the plain and the sea winds, they built a cottage looking to the hills. 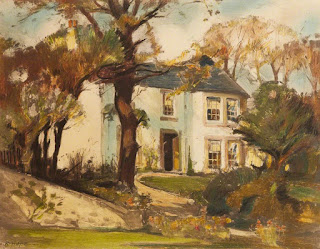 They brought crockets and gargoyles from old St Giles which they were then restoring, and disposed them on the gables and over the door and about the garden; and the quarry which had supplied them with building material, they draped with clematis and carpeted with beds of roses. So much for the pleasure of the eye; for creature comfort, they made a capacious cellar in the hillside and fitted it with bins of the hewn stone. In process of time, the trees grew higher and gave shade to the cottage, and the evergreens sprang up and turned the dell into a thicket. There, purple magistrates relaxed themselves from the pursuit of municipal ambition; cocked hats paraded soberly about the garden and in and out among the hollies; authoritative canes drew ciphering upon the path; and at night, from high upon the hills, a shepherd saw lighted windows through the foliage and heard the voice of city dignitaries raised in song. 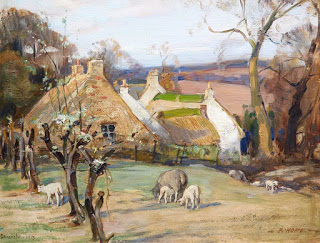 The farm is older. It was first a grange of Whitekirk Abbey, tilled and inhabited by rosy friars. Thence, after the Reformation it passed into the hands of a true-blue Protestant family. During the covenanting troubles, when a night conventicle was held upon the Pentlands, the farm doors stood hospitably open till the morning; the dresser was laden with cheese and bannocks, milk and brandy; and the worshippers kept slipping down from the hill between two exercises, as couples visit the supper-room between two dances of a modern ball.

In the Forty-Five, some foraging Highlanders from Prince Charlie's army fell upon Swanston in the dawn. The great-grandfather of the late farmer was then a little child; him they awakened by plucking the blankets from his bed, and he remembered, when he was an old man, their truculent looks and uncouth speech. The churn stood full of cream in the dairy, and with this they made their brose in high delight. 'It was braw brose,' said one of them. At last they made off, laden like camels with their booty; and Swanston Farm has lain out of the way of history from that time forward. I do not know what may be yet in store for it. On dark days, when the mist runs low upon the hill, the house has a gloomy air as if suitable for private tragedy. But in hot July, you can fancy nothing more perfect than the garden, laid out in alleys and arbours and bright, old-fashioned flower- plots, and ending in a miniature ravine, all trellis-work and moss and tinkling waterfall, and housed from the sun under fathoms of broad foliage.


The hamlet behind is one of the least considerable of hamlets, and consists of a few cottages on a green beside a burn. Some of them (a strange thing in Scotland) are models of internal neatness; the beds adorned with patchwork, the shelves arrayed with willow- pattern plates, the floors and tables bright with scrubbing or pipe-clay, and the very kettle polished like silver. It is the sign of a contented old age in country places, where there is little matter for gossip and no street sights. Housework becomes an art; and at evening, when the cottage interior shines and twinkles in the glow of the fire, the housewife folds her hands and contemplates her finished picture; the snow and the wind may do their worst, she has made herself a pleasant corner in the world.

The city might be a thousand miles away, and yet it was from close by that Mr. Bough painted the distant view of Edinburgh which has been engraved for this collection; and you have only to look at the etching, to see how near it is at hand. But hills and hill people are not easily sophisticated; and if you walk out here on a summer Sunday, it is as like as not the shepherd may set his dogs upon you. But keep an unmoved countenance; they look formidable at the charge, but their hearts are in the right place, and they will only bark and sprawl about you on the grass, unmindful of their master's excitations.