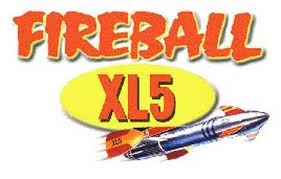 Of all the Gerry Anderson shows Fireball XL5 was my absolute favourite-how cool were these jet-mobiles?

Fireball XL5, was ably commanded by Colonel Steve Zodiac-like Captain Kirk, he was the best pilot in the fleet. He was ably assisted by Venus and there was a really interesting character who was a co-pilot called Robert; Robert was a transparent, anthropomorphic robot who toward the end of the programme usually said in a staccato robot like voice, 'ON-OUR-WAY-HOME.' 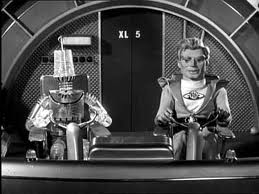 I didn't much care for Stingray; Thunderbirds; or Joe 90, but there was something about Fireball XL5 that simply fired and captured one's imagination. The characters were good; the balance of time, space and setting were excellent; and the story lines were okay. Without getting into textural analysis or deconstruction the plots generally followed the classic format of order, disorder, restore order. Whilst for children there was security in that situations were resolved, missions accomplished and therefore control and order were restored; and yet there was also something deeply unsettling too-in particular I found the the view from the cockpit out into the distant dark depths of space to be particularly haunting and potent. 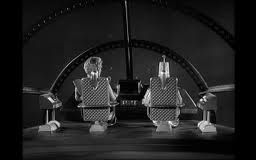 That image actually conjures up aspects of Star Trek-was Fireball XL5 an influence? Certainly there was a Scottish engineer in the show-never mind Scottie, this character was Capstan Full Strength-he went by the name of Jock Campbell-Noo ye cannae get any more Scottish than that laddie!

By the way, who can think of Scottie without thinking of the immortal line, Captain, the engines cannae take it!

And of course after enjoying the show we could discuss its merits whilst enjoying an evening smoke:

Or if was a warm day: 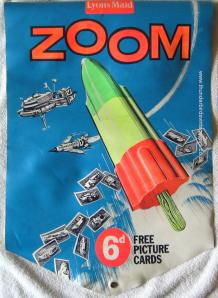 The show got it right, from the very start-who couldn't be sucked or even suckered in by the opening bars of the programme's instrumental theme tune; better still was the closing theme song which went on to become a hit in Britain. If you've never heard it, check it out on Youtube at the link below-better still, download it to your mobile! As a theme tune, surely only bettered by Robin Hood?
I wish I was a spaceman

The fastest guy alive
I’d fly you ’round the universe
In Fireball XL5
Way out in space together
Conquerors of the sky
My heart would be a fireball, a fireball
Every time I gazed into your starry eyes
We’d take the path to Jupiter
And maybe very soon
We’d cruise along the Milky Way
And land upon the Moon
To a wonderland of star dust
We’d zoom our way to Mars
My heart would be a fireball, a fireball
Cause you’d be my Venus of the stars
http://youtu.be/ed0jsVgIHu8

ps In London with d'Artagnan today and tomorrow so Saturday's post will probably appear a little later in the evening.
Posted by Peter Hoffmann at 2.11.12

Hello Peter I am pretty sure that photo is Esther blades

Douglas and I couldn't fathom it-certainly blonde enough but we did not think so? I thought I would be more perceptive especially as I used to take you and Esther out on occasional bus trips around that time-I think it was to the likes of the dolls hospital where we got footballs mended or the Joke Shop, both at Forrest Road!

I think you'll find its actually Gail in that photo with the doll.
I will check and get back.

Confirming that the 'Photo Corner' shot is of Gail Blades with her doll Rosebud.
Nice to hear Douglas's musings :)