NEEEP!-Bonus Post From Douglas Blades On Bus Crash At Oxgangs!

Looked at BLOG tonight. Front page was Aug 2012 and mentioning the bus which toppled over. It was Leyand PD3 with Alexander body and reg ASC 655B. Here’s a photo of it on another service on the front cover of Buses magazine. 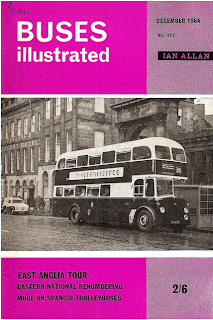 I'm fairly certain (and George Upstairs has confirmed so) that this is off the ECT Leyland PD3/6 Alexanders double deck 655 (ASC 655B) bus that came a cropper at Oxgangs on Wednesday June 18 1975 when it fell over one day and was subsequently scrapped. I have memories of finding the hulk in Shrubhill Works and managing to acquire this. Mind you someone with a fleet body list for Edinburgh should be able to verify it. The serial number is E/1/3463/5. Alexanders were for many years in the 1960s to the 1980s the coach-builder of choice for Edinburgh-based up the road in Falkirk they are of course, still in business.

As for the accident I have the Edinburgh Evening News for the day-and nine were hurt in the accident-a lorry hit the bus as it turned right from Oxgangs Road North and Oxgangs Avenue.

From George Upstairs: So you're right Mike. Also, see the beast itself. 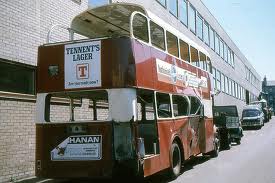 Comment From Circle1939: It wasn't actually the accident which resulted in 655 being scrapped. The crane sent out to get the bus managed to distort its offside doing so and that was enough to put 655 off the road for good.

I have two angles on the bus story. Our father, Charles Blades, was shaving at the side window in the large bedroom and that window looked out towards the junction – I wasn't in at the time but the story was related later – when he  exclaimed to our mother, Helen, that bus is toppling over – or words to that effect!

I think I was away to work at the Transport Dept by the time it happened but Mike Ashworth is correct, they did make a mess of getting it back up again so it had to be written off. I too visited the remains in Shrubhill after the event. The engineers had coincidentally just been considering having an exercise in raising a toppled decker when this happened. Normally they would bolt a large iron upright bar to the two upper hubs and perhaps drive a couple of large metal pins against the wheels on the ground to stop the thing slipping. Well, whatever they did they couldn't raise it hence the crane and infliction of terminal damage!

And as you can see from above – someone managed to retain the body plate a souvenir!