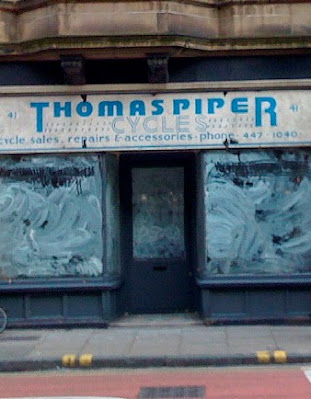 We're big fans of the Tour de France; each summer my wife Alison and I settle back on the sofas and become immersed in it-Brad is Alison's favourite-I enjoyed watching Lance Armstrong's exploits and before him the five time winner, from Spain, Miguel Indurain. 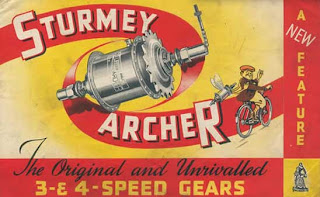 Cycling was big at Oxgangs in the 1960s-today you would be lucky to spot a kid on a bike. Most of the bikes back then were built from scratch-there was a great trade going in bike frames which could be picked up for five bob-this trade was supplemented by trips up to Thomas Piper's cycle shop at Churchill at the top of Morningside Road, just along from the Churchill Theatre. The shop was a great place to visit-a real Aladdin's Cave -it had a distinctive smell from the rubber; it existed for decades and only closed in the past ten years or so. Even then the shop had passed on to new owners as Thomas Piper died in 1939. At the top end of the price range wheels and gimmicky items like speedometers, bottles and bottle-holders were occasionally purchased-more often it was inner tubes, puncture repair kits or spanners at the lower end of the scale.

If you were lucky you had a bike with 3 speed Sturmey-Archer gears-Dougie Blades had 5 gears which was unheard of! It must have bugged him because I was always up at his door borrowing his racer-looking back he was pretty decent to allow me the use of it, although often it was perhaps his mum, Helen, who gave me the go ahead to use it when he was out.

I enjoyed sitting out in the back alleyway where the sheds were.

It was here that I pottered away with my bikes-fixing a puncture or tinkering with the gears-there was something very satisfying about working with your hands. The experience was enhanced if it was raining outside because one was sheltered under the alley roof but the entrance was open on two sides, one of which was the entrance to our back garden.


It was a Zen like experience, focusing on working on the bike while being vaguely aware of the rain pitter-pattering down outside, whilst one kept dry inside-a lovely feeling. Because of the weather I'd usually be working alone as everyone else was inside in their homes-occasionally someone would pass by and pop their head in and exchange pleasantries. 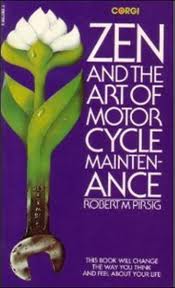 Great fun was had playing in The Gully which lay between Oxgangs and the Braids; it was located to the south of nice houses at Pentland View and lay in a small shallow or valley. I guess it was a fore-runner to BMX riding with the circular paths with rises, declines and jumps.

That I'm alive to write this blog is down to good luck; one afternoon after playing at The Gully I came home via Comiston Road on a made up bike which had no brakes. I was flying down the road when an Eastern Scottish bus was leaving a bus stop adjacent to Braid-Burn Valley. I was going so fast that I would have hit the back of the bus-I had to take evasive action by overtaking it. This was a struggle as the bus was gaining speed all the time-I peddled furiously just managing to overtake it to the astonishment of the passengers on the lower deck-however as I edged in front of the bus I had to take a sharp 90 degree left hander veering into Greenbank Crescent to go back home to Oxgangs-I knew it was going to be difficult to make it-I did manage to keep upright, but of course with the formidable speed I swung straight on to the other side of the road before mounting the pavement-very fortunately there was no oncoming traffic.

Occasionally some of the older boys up Oxgangs Street organised bike races out to Currie. The boy who surprisingly dominated was someone who didn't excel in any other sports or activities-I think his father was Polish and his name was Paul Kaszynski. I was really impressed at how good he was and even at a young age it occurred to me that one needed a certain fortitude and mental resilience to put in such a strong performance in sport.

For me however, the most extraordinary performance on a bike was Boo-Boo-a group of us used to go on long cycle adventures in the summer holidays including Les Ramage (4/3); Ali Douglas (8/3); and Iain-this one was to Dalkeith and home via Liberton Brae-we all had passable bikes-except for Boo-Boo who borrowed one of mine which had a puncture-Boo-Boo was so keen to go on the outing that he rode the whole way, there and back, with no air in one of the wheels-respect!

More on bikes in a future blog-including the famous Raleigh Chopper.

Thomas Piper! A name I've not thought about for 40 years! I've never been a bike person at all - perhaps because we did have a car in my childhood. My dad was a car buff and had very nice cars, things like Citroen DS's and a Jaguar and something called a Sunbeam which I've no idea what it was. Later when us kids came along, he had more prosaic Ford Cortina estate cars. He used to spend every weekend in the garage at 16 Swanston Avenue labouring on these cars but despite - or perhaps because of - this I also remain resolutely uninterested in cars.

I've digressed from Thos Piper. Knowing nothing about bikes, I remember asking a boy at school something about them - probably out of politeness or more likely when you're 10 out of wanting to suck up or fear - and his reply was "You get them from Thomas Piper of course." There was an implicit "Everybody knows that, duh!" I hadn't a clue what he was talking about but I remember resolving to ask my parents if I could get something - ANYTHING - out of Thomas Piper, whatever it was.

A bit like your custard with chocolate powder, it's these little pin-pricks in the skin of your memory that really stay with you, isn't it?

Hi i was pleasantry surprised after dropping down the internet rabbit hole to find my self remembered.My sons stay in firrhill loan and I still take a walk round the area usually the dell (we moved up to 6/3 oxgangs street from slatford village about 62 )or the hills.Cycling ,yes still the same but never a sport it,s the freedom the means to be. All these names some forgotten some not i can think of a few more that have not appeared in your blog and if you wish i could add. I now live in Livingston it,s a bit like oxgangs woods a view to the hills great. myself, a brat who vaguely gazed
on the knee high nineteen fifties
and the waist high nineteen sixty's
and couldn't figure numbers worth a damn
was always a chancer
and given three lines to add I'd put the middle row
down as the answer
but I would read all day if I could get away with it
and all night too with a flashlight under covers
of Merlin of the borders
and in seeking out the stories of Britain's ancient lineage
I delved
on days subtracted from the blackboard's paltry tyrannies
among dog eared authorities, back shelved in libraries
thanks Paul Kaszynski..on facebook. Im now going prove im not a robot , i like that ..lol

I never understood why the Sturmey-Archers always seemed to get stuck in the hardest gear - something to do with springs I suppose.

I remember cycling down to S. Queensferry and over the bridge to Burntisland with my mates aged 10 or 11 - can you imagine any parents allowing that today? My parents didn't even know where I was half the time :)