Was it the poorest giving to the poor?

At this time of the seasonal year in the 1960s, sometimes tying in with the Harvest Moon, the annual Harvest Festival was held at Hunters Tryst Primary School. 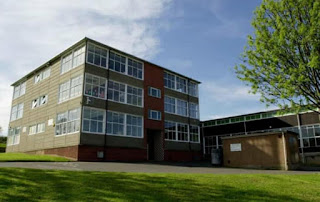 Local schoolchildren were expected to bring in small items of food - some fruit, vegetables or a tin.

The contributions were then laid out artistically on tables in the school hall making for a wonderfully colourful display.

There would also be a special Harvest Service held in the school hall conducted by the Reverend Jack Orr from the local parish church. It was always fun to bark out Matthias Claudius' marvellous hymn  'We plough the fields and scatter the good seed on the land...' 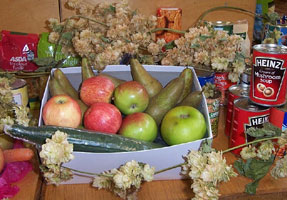 Because of its religious connotation, I don't suppose these Harvest Festivals are still held in many schools, but I suspect they're actually more grounded in pagan tradition. Certainly the word haerfest is the old English word for autumn.

I enjoyed the occasion - they always had a particularly happy, optimistic feel to them reflecting the celebration of autumn and the bringing in of a good harvest; it was an interlude before winter set in and it was another of the rather comforting milestones in the calendar year which are important to children.

The food was thereafter distributed to local pensioners, but I wonder if they were not less in need of the largesse than many local young families in Oxgangs?