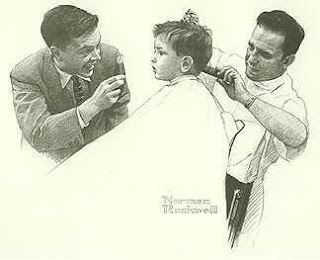 When do you know you've really made it as a businessman?

In the days leading up to the start of the new school term in August after the summer holidays my brother Iain and I (6/2 Oxgangs Avenue); the Hanlons (6/7); and dozens of other small boys would be taken up the hill to Ben Mackenzie's to get our hair cut to look smart for our return to Hunters Tryst for the start of another school year.

Despite some of the images of unhappy kids produced over the years by artists and comments from others I quite enjoyed the whole barbering experience. 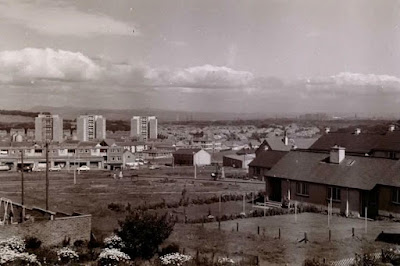 Ben's shop was located at the back of the Oxgangs Broadway shops at number 18 on the south facing side.

It was the furthest away shop from The Stair.

Ben was a great advert for his business - neat, immaculate and dapper, with brylcreamed greying hair and a little moustache; in some ways he was a walking advertisement for his profession. But not necessarily a good barber.

Ronnie Cutt felt you were 'lucky to come out with your ears intact!' Whilst Doreen Rutherford Black said her sister, Margaret, went in for a ladies trim and he mistook her for a boy! Margaret retorted that her mum 'made me wear a hat for a month lol!'

Anne Mckenna said 'I remember my mum complaining about his poor barbering. I think she sent my dad back to complain or went herself at some point...the lack of mothers' involvement probably explains how he got away with it for so long.'

We usually had to sit in a queue in his shop but there were always some decent comics to sit and read.

Also older men would 'pull your leg' whilst chatting up the mothers - it was my mother who usually always took us along to ensure Ben did what was wanted.

When the great moment arrived to have your hair cut, because we were small, we had to sit on this little cross bench which was laid across the arm rests of the barber's chair which I thought was pretty cool.

Ben would set to work and the haircut was always finished off with some 'jungle juice' which he plastered our hair down with; as I had wavy hair I liked this and regretted it never stayed that way for long.

We were never allowed number ones which the Hanlons got.

The only way we ever got a number one was when Iain and I gave ourselves self-administered haircuts at home one day when my mother was out at work!

Norma Fraser said 'My dad always said (when my brothers were sent there) down to the wood. One style only.' Similarly Brian N Cherie Clement said 'when I was young I went down with my old man and used to ask for a trim; my dad obviously had signalled to Ben and I ended up being scalped - was not impressed.' Neil McGilvray said 'Big Chief Ben gave everyone the same haircut.'

Anyway, when you returned to school, the opening remarks or soubriquet from your pals was, 'Aye Peter, ah see you've had a Ben Mackenzie!' aka a BIG Ben schoolie! (Alan Robertson)

When you're name becomes a trademark, that's when you've really made it in business!
Posted by Peter Hoffmann at 11.9.18