No Pedlars, Hawkers or Salesmen

When I was doing my early morning paper run for Bairds Newsagents a door plate which I saw at a house in Morningside read No pedlars, hawkers or salesmen.

I didn't have a clue what the first two terms meant but always found the sign intriguing.

When I read the sentence out aloud  it had a certain rhythm to it - like the Cher song, Gypsys, Tramps & Thieves. Even now, there's a medieval feel to it.

It made me reflect on how lucky we were in some respects to be brought up in Oxgangs.

There was a certain richness of experience in our lives which might have been missing if we'd been brought up elsewhere. We got the chance to meet all these wonderful characters and shared in the vibrancy and colour of communal living. If we'd stayed in the leafy suburbs of Morningside life would have been quieter and much more solitary.

So, No Pedlars, Hawkers or Salesmen certainly wasn't the kind of door-plate that appeared on any door in The Stair. And perhaps if there had been such a notice it might have read as below! 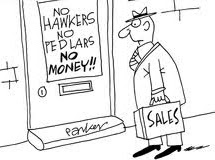 'Another salesman was a Pakistani gentleman who my brother Douglas irreverently called 'Sambo'. I have no idea what his real name was but I always admired him because it took guts to do what he did. He wore a traditional trench coat like Humphrey Bogart and carried a large brown suitcase stuffed with all manner of goods.' Liz Blades

As Liz says one of the many itinerant pedlars, hawkers and salesmen who visited The Stair each week was a small Pakistani or Indian travelling salesman.

We both recall how he was always dressed the same way, no matter whether it was summer or winter, he wore a fawn coloured raincoat/trench-coat.

My mum seemed to recall that he wore a turban - I don't recall whether he did or not. If he did, the odds are that he was Indian.

As Liz said she admired him - it took a lot of chutzpah to go from household to household trying to peddle wares.

He was always impeccably mannered with a ready smile on his face.

For me he was like the rag n bone man because of his suitcase full of curiosities.

The only occasion I recall us getting something from him was a little tin of polish which he recommended to me for cleaning my bicycle.

Ironically, I don't think we bought it - instead it was a free sample to tempt us to purchase the normal size tin. I believe the manufacturers produced these sample tins for that purpose. 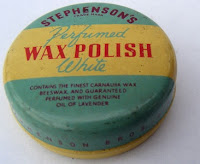 I wonder what happened to him and his family over the years and decades?

His was such an exotic appearance and visitation that he left an indelible mark on my memory.

But two stories we do know about is that of Lal Khatri and Baldev Singh from the book Moving Worlds, the Personal Collections Of Twenty One Immigrants To Edinburgh which give an interesting insight into the world of the Pakistani or Indian gentleman with the suitcase who used to visit the residents at The Stair.

Lal Khatri left the Punjab in 1929 and came to Edinburgh.

He was advised by a friend...If you get a pedlar's licence from the police and you buy some stuff and you sell it, then that will give you some income to live on if you are lucky. He then goes on to say...I managed to get the licence and it was very good from then onwards. Things were hard but I could always get enough money to buy bread and pay for my room and all that sort of thing. We sold all sorts-shirts, dresses and blouses. I sold what I had with me and took orders for anybody wanting anything...the prices were quite reasonable but lots of people had no money. Even one eleven-ha'penny article took two or three visits for customers to pay for. Some people banged the door in front of you...others would open it...Oh, some of those people became friends through that, and others, of course, had no time for you at all.

Baldev Singh came to Edinburgh in 1958.

He says...my grandfather came to Edinburgh as a door to door salesman...He used to sell shirts, ties, hankies, blouses, things like that. They all did that when they first came here...But 90% o' Sikhs went roond the doors sellin' with a suitcase, took orders and delivered the stuff. It's freedom to them, you see. Naebody but themselves, naebody tellin' them what to do. They used to go whenever they felt like it...