The Boy With A Green Pistol and the Felled Number 16 Bus!

I hope this email finds you well.
I saw your article a few years ago about an Oxgangs bus incident and was going to contact you, but just never got round to it. I hope I don't annoy you by going over this story.
On a short break from Dumfries to the Jurys Inn in Edinburgh next to Waverley Station back in November 2014, my future wife and I had been doing a bit of sight seeing and had taken a few good photos up at Calton hill and the Folly. We had worked up a good appetite and were now getting ready for evening dinner. While Judith was having a shower I happened to look out the window onto an arch bridge on Waterloo Place; when you see it at night it's well lit underneath with colourful lights and you could see the vehicles on top travelling to and from Princes Street.

I recollected travelling up from Dumfries visiting my Nana Law at Oxgangs back in the 70s. (It would have been on the 18th June 1975 - Peter Hoffmann). I remembered clearly when I was about 4 years old walking with my dad down, I think I am right in saying 'Colly Mains Road' as they call it (Colinton Mains) and past R. Drummond the Chemist to a toy shop where my dad bought me a bright green water pistol.

We walked back to my Nana's (Nana Law also known as Angie Law) the long way and instead of going in at the bottom of the hill at the chip shop and Scotmid end we walked further up where we saw a toppled double-decker bus that had taken down a fence at the side of a church. My dad and I went to my Nana's house and picked up his camera and went back round the corner where he took a photo that he would keep in his wallet for the rest of his life, a picture of me grinning, holding a bright green water pistol beside a bus on its side that had some recovery men at it. 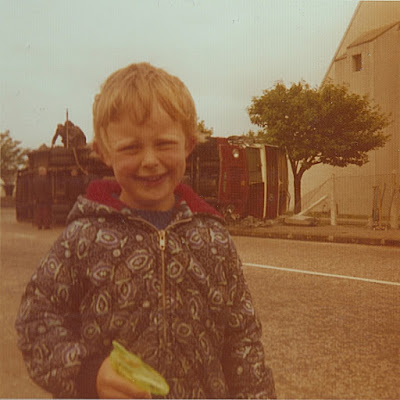 'Honestly officer, I didn't shoot the number 16 bus down!'
Robert Law aged 4 in front of the toppled 16 bus

I had an early fascination with anything mechanical especially buses, I grew up to take an apprenticeship mechanic job with Western Scottish buses in Dumfries in 1987 and spent nearly 17 years there. It must have been in my blood. My papa from Edinburgh was a precision Engineer for the water board and one of his sons Alistair Law who had also stayed nearby my nana in Oxgangs in one of the flats worked as a lorry driver for Texaco.
I decided to go onto the internet and see if there was any information on the toppled bus hoping that I might find something about it. I came across your blog "The Stair" that seemed interesting to me as it was about Oxgangs, a place that held a lot of memories from my childhood.

I read on further and it mentioned someone looking out from across the road witnessing a bus starting to topple, I searched further and it took me to the picture of Ian Allan's "Buses Illustrated" magazine issue number 177 December 1964  2/6, and with a shiver down my spine read that this was the toppled bus. It was photographed brand new on its first day in service  sitting at the bus stop facing Princes Street, on the bridge on Waterloo Place, just as I was looking at the bridge.
To make things more special for me and my memories about my dad twho came from Edinburgh and subsequently passed away in 2006 with a picture of a wee boy holding a bright green water pistol beside a double-decker bus on its side in his wallet,

I went onto Amazon and found as advertised in excellent condition from a collector a single copy of Ian Allan's "Buses Illustrated" magazine, issue number 177 from December 1964 priced at 2/6 showing the bus on the bridge that I was looking at from my window of a hotel bedroom window, and proudly have it to this day along with my dad's old wallet.
Thanks for having the article on the internet for me to find.
Robert Law.

Hi ref.Alistair Law, he and his wife Anne stayed next door to me for a number of years, until Alistair past on

Ally loved his cars, they were always white vauxhalls. After Oxgangs they moved to Baberton. Loved seeing his top spec cars, he kept them immaculate

Yes Alastair certainly did always top of the range cavalier in white with his driving skills badges on the front bumper I think he may have had a Hearts badge as well, as he was a supporter, especially after a wee drink,that's when he liked to sing about it.