For many people it's the start of autumn'...season of mist and mellow fruitfulness.
'
As August turned to September and then drifted toward October the daylight available to play started to diminish, but immediately after school finished there were still enough hours for adventure .

Some of the fun to be had revolved around apples.

Outwith the likes of Mr McQueen at Oxgangs Park not many fruit and vegetables were grown in Oxgangs so half the fun was that a group of us would have to venture out of the area - for apples it was mainly to Greenbank or occasionally to Colinton or even as far afield as Blackford.

These trips always gave us a buzz because strictly speaking we were stealing and there was a high degree of risk - possibly even getting caught.

The fun was in the act.

The fun was in going out in a group and searching out particular gardens where trees were heaving with apples - usually located in residents’ back gardens.

There was the daring involved in clambering into these gardens usually over walls, fences or through gates and then stealing the apples. 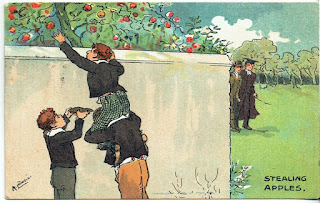 On many occasions we would be spotted by the owners and it gave us an enormous buzz when we would all have to take to our heels and run like the deer. After we had reached safety back at Oxgangs we breathlessly exclaimed our relief and laughter at our narrow escape as we headed for home, although there was always still a small risk that the police might yet appear.

Extract from Retep Nnamffoh’s Diary: Sunday, 12th September, 1971 It was a very bonny morning to be out 'n about - cool, but with the prospect of it being a scorcher, not to mention, no school today - braw man! I cycled up to the City Hospital to do my papers. It was good to see my large bundle of newspapers awaiting me. Stuart Baird had at least got up out of his bed on time and got the finger out to deliver them in his cool Triumph Herald. 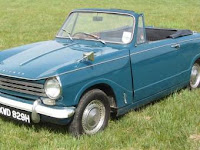 I managed to sell out once again. I sat with an old patient for over ten minutes having a wee blether with him. I enjoyed doing that and after all, with it being a Sunday I was in no hurry. 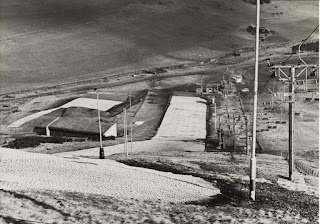 Later on in the day a wee bunch of us cycled from Oxgangs up to Hillend to the ski-slope. My sister, Anne and I went on the chair-lift. I always think it's not quite as tame as it looks - particularly coming down the way. But, what a very braw view across old Edinburrie toon - even more so as it was an absolutely boiling day. It's funny the way it sometimes works out when you go back to school; anyway, we were all off to be able to enjoy it. 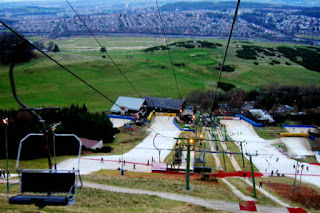 After our tea a big group of us all went stealing apples at Blackford - what a flipping laugh we all had. It's such a great buzz being out in a good group with all the excitement of us sneaking in to someone's garden. 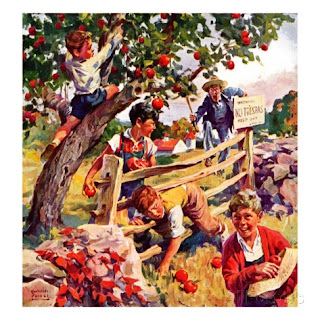 Happy days and a very braw way to finish off a good weekend.

Email ThisBlogThis!Share to TwitterShare to FacebookShare to Pinterest
Labels: Apples