In his posthumously published book of essays The Memory Chalet the brilliant historian Professor Tony Judt wrote of his favourite bus route, The Green Line Bus.


Throughout the 1960s the bus numbers 4, 16 and 27 served Oxgangs. In the late 1960s the number 5 was introduced, extending its terminus from Morningside to Oxgangs.


Generally speaking the bus service to Oxgangs was superb - we at The Stair who were all great users of the bus service probably didn't quite appreciate just how good it was at the time. For decades I suspect the bus service in Edinburgh has probably been amongst the very best if not the best in the United Kingdom; busses served Oxgangs from early in the morning - around 5.30 a.m. until half an hour or so before midnight.

For the Hoffmanns the number 16 bus was our favourite and the most used. We liked its route through Morningside, Bruntsfield and all the way to Princes Street-we were less keen when it ventured down Leith Walk, but rarely ventured down that way. 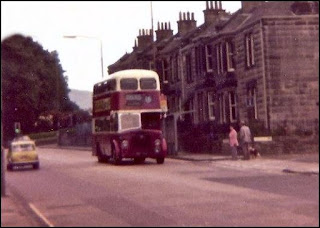 It was the bus that took me to and from Bairds' Newsagents at Morningside in the early mornings in each of the seasons of the year. Oh, how I enjoyed standing on the open platform on the home journey on sun-kissed summer mornings, as it tore along Oxgangs Avenue on my return from delivering newspapers. Often, before eight o'clock, Esther, Ruth and Alison Blades would already be out playing at the front of The Stair. 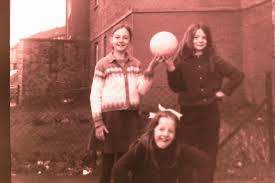 It was the bus that took my mother to work at the east end of Princes Street in later years. It was the bus that took me to and home from Boroughmuir School at Bruntsfield. It was the bus that took my father to work at his various working locations over the years. And it was the bus on which I came across his ghastly presence on one late afternoon when I had stolen money from my mother's purse; I had spent it on a good time in town - I thought I'd be smart and get off the bus one stop earlier - I hadn't spotted Ken Hoffmann on the packed bus until I was about to get off - he said I'll see you shortly son. It was with a very heavy heart that I wearily walked along the remainder of Oxgangs Avenue to The Stair to face the punishment of a overly severe spanking. 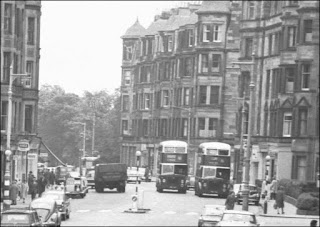 The bus took on different moods depending on the time of the day. Very early mornings were surprisingly cheery in the company of the couthy, sparky school cleaners; weekday mornings with workers going off to work would be silent, mournful, slightly depressing occasions; upstairs meanwhile would be contained within a fug of cigarette smoke. During the day, the bus would be quieter, with some local women who were lucky enough to venture into town. The after school buses were always packed, so less enjoyable, but better than going in during the morning with the office workers.


At weekends the busses were always jollier - it was a happy, optimistic bus that took us out on Saturday mornings to Warrender Swimming Baths which were great fun or to Woolworths at Princes Street for fun, food and photies. 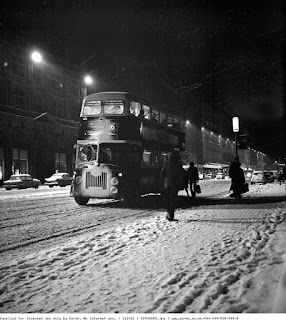 Late nights were a rarity, but on occasional Sundays when we travelled home together as a family from dark Stockbridge via Princes Street to Oxgangs in the deep mid-winter we couldn't wait to get on board the number 16, to sit on the long seats downstairs beside the heater where we snuggled up to rid ourselves of the winter chill that had set in whilst awaiting the bus. 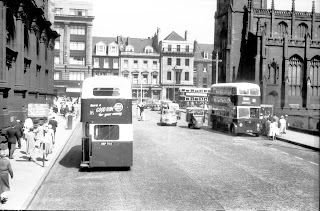 Those were still the days of bus conductors. The conductors' manner and demeanour often set the tone - it didn't depend on their gender, but usually women exhibited better customer care. 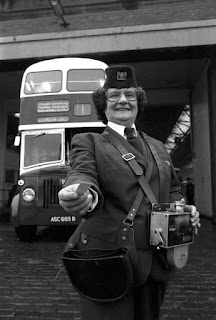 There was one lady clippie - Annie Boyle - who had a giant personality - her bus was always a joy to travel on; she was amusing, funny and full of good cheer interacting with her passengers enjoying the craic and chatting to the kids too! As the 16 wound it's way towards Oxgangs she would call out the names of the stops and the streets. I've occasionally written about the difference between a transaction and a relationship and her approach to customer care was most certainly a great example of the latter.

Yes, the number 16 served as a vehicle, but not just for getting us all from point A to point B, but it also served as a vehicle for our moods - happy, sad, reflective; it was a vehicle for conversation and friendship where you caught up with friends and neighbours, news and views and you could strike up surprisingly good chats with neighbours who you might only normally pass the time of day with; and it was a bus that carried our hopes, aspirations, dreams - to school exams; job interviews; dates at the cinema - and thereafter carry us homeward, either full of joy or deeply despondent. 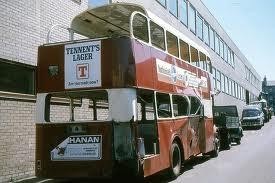 On one occasion the 16 bus was bowled over. It was Leyand PD3 with Alexander body and registered ASC 655B. Here’s a photo of on the front cover of Buses magazine of the bus that came a cropper at Oxgangs on Wednesday June 18 1975 when it fell over one day and was subsequently scrapped.

The Edinburgh Evening News for the day said nine were hurt in the accident - a lorry hit the bus as it turned right from Oxgangs Road North and Oxgangs Avenue. It wasn't actually the accident which resulted in 655 being scrapped. The crane sent out to get the bus managed to distort its offside doing so and that was enough to put 655 off the road for good.

The inimitable Douglas Blades (6/6 Oxgangs Avenue) comments: Our father, Charles Blades, was shaving at the side window in the large bedroom and that window looked out towards the junction. I wasn't in at the time but the story was related later. He exclaimed to our mother, ‘Helen, that bus is toppling over – or words to that effect!

So, day in-day out; week in-week out; year in-year out, even after it had once been bowled over by a lorry while turning at the junction with Oxgangs Road North the bus carried more than just its passengers - it somehow was a symbol or an emblem for Oxgangs. Long live the number 16!
Posted by Peter Hoffmann at 12.10.12

Douglas will particularly like this blog as you know he loves the buses and even worked for them for while and is still dabbling in transport even now. looking back it was a good service. We never had to wait long as we would watch out the window for the 16 coming down the hill and then run down the stairs to catch it as it came around the corner.

Peter, there's a boy called Mikey Ashworth with a Flickr photostream - http://www.flickr.com/photos/36844288@N00/ - that has a number of 70s photos of LRT buses around south Morningside. You have to search a bit but you might be interested anyway.

Thanks Neil and Carol-will check out-currently in Starbucks at Holy Corner-yet another flying visit south with Dartagnan at Gateshead!