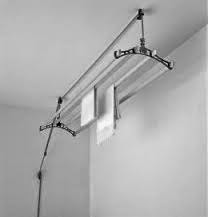 It's strange how things that one hasn't thought of for decades take a little nudge from somewhere and something long forgotten bubbles up to the surface.
I was reading a copy of the 2 May 2014 edition of 'The Lady' (don't ask!) where I came across a query from a reader looking for a clothes rack that could be suspended from the ceiling. 'It's called a pulley' I shouted at the magazine-we had one at The Stair, as indeed did each of the eight families. And what a boon it must have been to all the mums-not stereotyping here-just the way it was back in the 1960s (see earlier Aye Working blog); in particular where the families were quite large including the Duffys; the Hanlons; and the Blades.
It was a rather clever idea. If one couldn't hang the washing out the back at the washing green because it was raining or snowing, then instead it could be hung up on the pulley indoors with a view to trying to dry the wet clothes inside.
Whilst the theory was splendid, in practice it had some drawbacks. Between 1958 and 1972 there was no central heating in each flat-only the small coal fire in the living room. Large items such as sheets would have to be hung up around the fire, but a member of the family always had to stand guard, in case the sheet became singed.
The other items of clothing would be hung on the pulley which was located on the kitchen ceiling. It was sited in the kitchen because any drips would fall onto the linoleum floor. It was a very clever device because the flats were quite small and space was limited.
The pulley was fixed to the ceiling and a rope lowered the frame down or pulled it back up. Whilst the clothes were loaded on, the rope would be tied to a wall hook. Thereafter, the rope was untied and the pulley hoisted back up to the ceiling.
Being able to haul the clothes up above meant it took up no floor space. However, the two drawbacks were that it must have taken days to dry. And perhaps more significantly any cooking smells would impregnate the clothes-a major drawback.
Looking back I guess the bathroom may have been a slightly better option. However, being creatures of habit and devoid of lateral thinking, we at 6/2 Oxgangs Avenue never considered relocating it.

You can still by pulley ends & rails from the hardware shop at Roseneath. Fitted a few of them for customers recently.