How Can Sundays Be Saturdays?

How can a Sunday be a Saturday?

Traditionally Sunday was a quiet day of rest and religious contemplation for many people.Certainly the atypical Sundays which we spent in the 1960s are a quickly disappearing thing; not quite extinct, but not far off...

The 1960s were a crossroads-at the end of the decade the culture was rapidly moving on and changing-fewer people were attending church; one or two shops were starting to open for longer; and young people in particular were keen to break away from what for many people could be quite a stifling day.

The Hoffmanns had a general Sunday pattern for many years which revolved around being collected at The Stair by our grandfather any time after 11.00 am to be taken down to Portobello for the day. We didn't have a telephone and of course mobiles weren't even dreamed of back then. Anne, Iain and I used to stand at our parents' front bedroom window to look for our grandfather's car coming down the hill at Greenbank. It's uncanny to think we could see that far, but this was when the prefabs were still there and before the new blocks of flats were built which replaced them.

We couldn't be entirely certain that it was his car, but there were relatively few cars on the road there on a Sunday. A cry would go up That's Gaga! and we'd all rush to get ready. Sometimes of course it wasn't and we'd go back to our waiting stations. 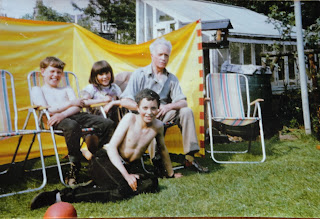 Over the years we attended church services intermittently before going down to Portobello. When we were very young we visited  the Bellvue Church with our father at the west end of Edinburgh. 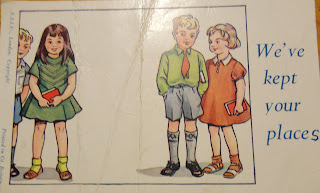 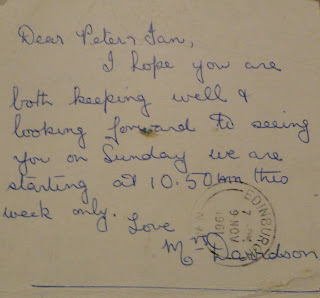 In the late 1960s and early 1970s we children went along to the new Oxgangs Evangelical Church which we generally enjoyed. I remember two spinster sisters-the Darnleys who took separate bible classes. I attended the elder of the sister's class. I liked her. I note from a diary entry of Saturday, 9 January, 1971 I went to a party at Miss Darnley’s (Bible Class teacher) at the bungalow she shares with her sister at Craiglockhart. Not bad. Good night. I think some of the Blades girls were at the party too-I vaguely recall Fiona and Gail being there). The sisters were kind-Miss Darnley gave us all a small present. She gave me a copy of King Solomon's Mines by Rider Haggard-a thoughtful present for a fourteen year old boy. I was clearly disappointed with myself and it was most unlike me not to be up early, but I noted in my diary of the following day (Sunday 10 January, 1971)...I got up at . I missed Bible Class. I was annoyed as Miss Darnley  had thrown a party the night before. I clearly felt guilty. 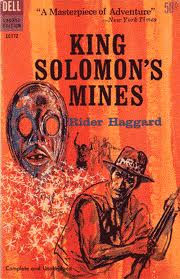 In the summer-time the family often went for an outing in the car with our grandparents. It was a traditional thing for the expanding British car owning population. If it was a run down the coast of East Lothian and home through the rich red soils of the farming landscape, we always stopped at Luca’s Café, Mussleburgh to enjoy their spectacularly good ice cream. My grandfather would treat us and buy each of us a cornet or wafer-he was a very generous man. We all ‘oohed and aahed’ at the creaminess of the flavour; today they have a very modern, fashionable up-market branch at Churchill where I give my custom every day of any visit to Edinburgh. The ice cream is still as good, particularly when it’s been freshly made.

We also went for regular picnics, but these tended to take place at Lauder Moor or Peebles.

Sometimes we were so full of food and had such an active day at our grandparents' house that on the way home to Oxgangs and The Stair we fell asleep as we cuddled up to each other in the Ford Zephyr or whatever car our grandfather had. The combination of the quiet drone of the engine, the car heater warming up and a dark winter’s night were a powerful sedative. At Christmas time, we managed to stay awake and played a game-we counted the number of Christmas trees we could see in house windows. In the summer, because of the light it, was easier to stay awake and on many occasions we had competitions to see who could count the most Mini cars. 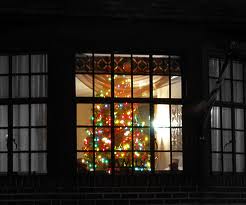 Throughout the 1960s for the other members of The Stair and also the Stairs at numbers 2.4 and 8 too Sunday was a very quiet day. Oxgangs resembled a ghost town. Out-with a few people collecting Sunday papers and rolls the streets were very quiet. The roads and the traffic were quiet too. The field out the back was empty of kids with no games of football played. The pre-existing culture from previous decades continued and dominated. Was it difficult for families to keep in and contain energetic young children?

As previously mentioned The Duffys attended St Marks RC Church; I never recall The Hanlons going to church or The Smiths; The Blades were regular attendees at both Oxgangs Evangelical and at Charlotte Chapel; neither The Stewarts or The Hoggs attended church; The Swansons attended the Colinton Mains Church of Scotland at Oxgangs Place opposite The Store.

In the late 1960s things began to change for us very slowly. We started to go to our grandparents' house on alternative Sundays and therefore got into the habit of playing outside. Very gradually some other families were the same. Michael Hanlon arranged football matches against other local street teams; despite being at Boroughmuir I still occasionally turned out for his Red star team. However, Sundays still remained quiet-I sense there was still a reluctance to allow Sunday to become just another holiday when children could run free and wild.

Even today, if I'm in Edinburgh and on a Sunday I retrace the route which my grandfather took to Portobello-down Greenbank; past the old tenements and large houses at Morningside, Churchill and the Grange; and from there though the Queen's Park and past the 12th century Duddingston Kirk, one can still see and get a sense of that weekly Sunday trip which we took throughout the decade of the 1960s-there are still well heeled and well groomed people, albeit fewer and fewer making their way to these large old churches.

Change came slowly, but steadily-a change in the culture-a change in values-and the children were getting older and less keen to be contained. In the early 1970s Paul Forbes and I went along to Charlotte Chapel-we must have been introduced to the church through the Blades family-I note from a diary a church barbecue at Gullane Beach, in the company of Fiona and Liz Blades amongst others.

The minister then was the rather engaging Reverend Derek Prime who we liked very much. Often Paul and I would arrive for the evening service carrying large bags of sports kit which the minister hid behind the pulpit for us!

We'd been training in the morning and then hanging around Meadowbank Sports Centre in the afternoon. John Anderson had an international squad there, but for some reason he allowed two scruffy and cheeky kids from Oxgangs to join in, much to the surprise of our contemporaries-perhaps he saw something there which few others did.

Thereafter we would chat up any girls who were around-usually Petrina Cox and Fiona McCaulay who were good fun. Once they'd left to do sensible thing-like homework, we'd remain there and either sneak in to the table tennis room and play at table tennis until we were thrown off. Sometimes the great Boroughmuir Basketball team were playing against the likes of The Hornets-again we'd slip in without paying and soak up the atmosphere cheering on 'Muir. 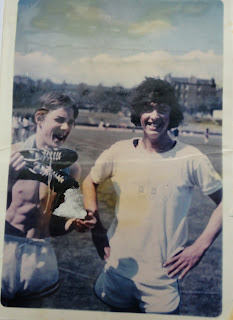 All the while we'd stretch out our limited finances, sometimes having to share a single plate of chips.We developed a very mixed reputation-the names Peter and Paul tended to ring too easily and too often off the tongue! We were certainly regarded as characters and had our ups and downs. We were often chastised and told off, but we kept coming back Sunday after Sunday as well as regular evenings throughout the week. Although I'm happy to say we were never mature, by attending week in week out, we began to get fitter and fitter, better and better.

If we weren't going to Charlotte Chapel from Meadowbank Sports Centre then it might be on our way back from an athletics competition at Perth or in the Borders.As this blog only covers the period to 1972, I can safely say that I certainly never achieved anything athletically at this time, although I did manage to break the school record in the 200 metres that summer and be part of an Edinburgh Athletic Club team which won the East of Scotland Championship relay. Paul meanwhile was relatively better than me and getting some good results at cross country picking up East of Scotland and National team medals.

A big attraction of Charlotte Chapel were the lovely girls there. In my memory, the girl who stood out was Moira Cameron who was beautiful. I'd see her on church outings and at the Youth Fellowship which was held in the minister's house at Morningside on Sunday evenings. I never plucked up the courage to ask her out. I notice in my diary of 14 June, 1972...I won the 200 metres in a new school record time...scived the afternoon...went orienteering with the YPM...Moira Cameron very nice looking...got a run home....

Along with the ever changing culture the most dramatic factor which essentially changed Sundays into Saturdays was the Sunday Trading Act, 1994 which permitted large retail shops to open on Sundays. People no longer had to rush to pack everything into a Saturday. People could now shop on a Sunday. The public could watch a Premier League football game-even a game of international rugby on a Sunday.

Sundays would no longer be quite the same; in my mind a Sunday still feels slightly different to a Saturday-gone is the Victorian suppression of the Sundays of the 1960s, enabling people to shop, work, play, but also to participate in religious worship and contemplation if they so wish-a halfway house which works for us all? Although I suspect some followers of The Stair may disagree!
Posted by Peter Hoffmann at 12.12.12