I saw your blog and read your book - I thoroughly enjoyed it!

I grew up in 22 Oxgangs Farm Drive and Anne Duffy (6/8) of ‘The Stair’ was my best friend at secondary school.

Her mum helped me out when my father went a bit berserk with me - she had a kind heart.

Like you, my brother also had a crush on Laura Duffy (6/8 Oxgangs Avenue)) as did a lot of other boys at school.

Joyce Colbron, who you mention, lived below me and I have an old photograph of us on the old waste ground - we were the Raffertys and the others, the Colbrons. It was taken at Oxgangs Farm Drive where the self-build houses go round Oxgangs Farm Grove. If my memory is correct the house which was built where we were playing belonged to a lad called Ewen Macleod’s family, but the photograph was taken before they moved in. Going there today it looks as if these new houses have been there as long as ours - it’s hard to imagine it all formerly being wasteland.

We were friendly with the Colbrons for a short time and then who knows what happened, but for years the two families didn't speak and later we moved away from Oxgangs. I think our family was the first to move in to our stair and the Colbrons the last; and I don't have many good memories of that time.
You also mention the Andrettis; what a sweet lady Mrs Andretti was. Freddie, one of her sons, was in my brother’s class at St Marks and he was a nice kid. I used to have to go to their shop (at Colinton Mains) in the morning before school for groceries and if Mr Andretti wasn't there Mrs Andretti would sometimes give me a Milky Bar. We didn't get sweets often and this was a real treat for me; so much so, I used to save it, but had to hide it in my jumper where it always melted - I can't stand white chocolate now! It was a kindness I’ll never forget.

I must have been very shy because I used to hate walking past the bus stop at the dentist’s on Oxgangs Road North, as there was always a big queue; so instead, when going for the groceries, I used to walk by the self-build houses at Oxgangs Farm Grove to the path at the side of the woods and go the back way through to the lane next to the Colinton Mains shops; it was actually very scary, but I was able to go back home along the main road and past the bus stop because it was maybe a bit quieter going back if the busses had been.

I was best friends with Anne Duffy (6/8) at secondary school; they were a very nice family and once when my dad was really berserk (I now know that he had a bad fall from a high height and damaged his back and my aunts have said his personality could transform from being pleasant to being the father from hell in one breath) - anyway one day I couldn't take anymore; I must have been about thirteen or fourteen and ran out of the house; however one of my slippers got caught in the door and I was too scared to go back for it. I shouted ‘I’m going to the police’ and I remember running past the dentist bus stop with only one slipper on and tears running down my face; however as I got to Dr.Motley’s surgery (situated next door to Mr Russell the dentist) I thought, They will just take me right back home - so I decided my next stop was to the Duffys (6/8 Oxgangs Avenue).

When Annie (Mrs Duffy) saw me she was so kind. She went up to my parents and when she came back said it is all sorted and you’ll stay here tonight and no school tomorrow; and when you go back nothing will be said. I don’t know what she said to my dad but when I did go back nothing was said. Annie could be very strict and give a good tongue lashing - did my dad finally get a bit of that? And did it make him think? Who knows, but that was a very good thing which she did for me.

When I was older and we went dancing, I usually went back to the Duffys to stay the night and Mr Duffy was also a good man. I would hear him pop himself around the door just to check we were all home safely and then leave; I loved that, as we never grew up with caring from our parents and I always felt wanted when I stayed with the Duffys. The only downside was that I was expected to go to church with them on the Sunday - a small price to pay for feeling so secure.

I just thought I would give you a little insight into the folk I knew (The Duffys, 6/8) that you didn't know much about. I hope it was of interest.

Oops, I’ve just recalled that Laura wasn't a sister; she was in fact a cousin. Her mum died and I think her dad was in the forces or overseas and Annie and John brought her up with their own family - that was the kind of people they were, with big hearts.

Sadly, Anne and I only keep in touch with a Christmas card now. When we had our families because of school etc and at the time neither of us could drive and Anne had moved to Gilmerton and I was at Duddingston, so we never had any time; then we moved abroad and came back and just never really got back together. Yet I know if I bumped into her now it would be just like yesterday again, but I guess we all move on. I did speak to her sister Mary not too long ago and she said Anne still isn't on Facebook - such a shame. She married about a year or so after me and had three boys and a girl. I didn't go to the local school, St.Marks; the only one of us who did was my younger brother so I didn't meet the Duffys until secondary school.

Anne and I used to go ice skating as well as to the dancing together and were very close until our own families went on to school. We also went to Germany together-we must have been only sixteen, so it was a big adventure for us. She was also a bridesmaid at my wedding in 1975.

I can't really remember much about John or James. I seem to think John got married and lived in Colinton Mains but I’m not 100% sure.I think James was the more mischievous one! Mary went on to become a nurse. Laura was different and always seemed aloof, but she really wasn’t and could be really funny. I remember listening to a Gary Glitter record and Laura belting it out at the top of her voice - I wonder if she remembers that! I do think all the boys fancied her; she too got married, I think to a postman and had children.

I noticed you became Friends on Facebook with John McDonaugh; he also lived in our Stair and I think he had a sister Marion. I remember my brother once playing in their front garden but no other memories of them.

Unfortunately, Hunters Tryst Primary School brings back some horrid memories to me. Like you we had blue dinner tickets (free school dinners) and for some reason during the summer holidays we had to go to Hunters Tryst for our lunches; although there were quite a few folk in a similar position there, but at the time you felt you were the only individuals receiving free meals. Well, we didn't know anyone and kids being kids, we were made fun of, so of course we didn't go back again but had to pretend to our parents we did. The stigma of standing in a queue for a free meal ticket would never happen now so at least some things have changed for the better.

A boy who you mention who you had some run-ins with must have got around as he used to also wait on my brother coming out of St.Marks where the church is and threaten him for money. He never got any as we never ever had money - you would think he would have picked on someone who could have given him something. My brother would dread coming out of school in case he was waiting. 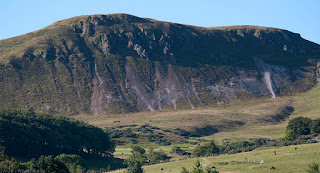 Funny we moved around 1970 to Marchmont, as our parents never liked Oxgangs as they grew up in the town so it was probably too much of a change for them. However I love going back there now. At the time I loved the openness of the area - the hills, the walks and the hours spent on the Pentland Hills or Hillend and the Braid Hills too. As a family we used to go to Spylaw Park, Colinton with a picnic - soggy tomato sandwiches and a bottle of water which we all shared but I loved it and as there was seven of us we could play rounders too - great fun!

I hope I haven't droned on too much!

Loved reading this.. Lots of things you talk about bring back the biggest rush of memories. I left Edinburgh when I was 18 and travelled Europe, lived in London and only went back on holidays to see my parents and family.. The rest I remember after reading all of these amazing stories published by people like yourself and of course all of this through Peter.. So glad he published his book and does these blogs. Its been bringing me back to my roots so much more now and jogging some fantastic memories of when I was just a wee lass growing up in Oxgangs. I had a great childhood. Not many incidents I can think of that were too unpleasant as a kid.. Thanks for sharing your memories

Carol,it was good to read your comment. And glad it started bringing back memories.I don,t know about everyone else but the older I get the more in the past I want to go,sounding like my mother now.regards,Pat.