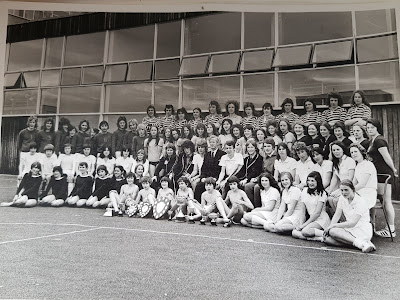 Lesley Hicks (nee McCall) posted this on the Summer Has Gone Facebook site; it’s such a cracking photograph of the Firrhill Secondary School sports teams circa 1973, capturing a moment in time, that it deserves a wider circulation.

Lesley's post has attracted several comments and led to a variety of threads; I’ve included only the initial one, which was kick-started by Lesley, but others can be followed on the Summer Has Gone Facebook page-link attached below

Lesley says: ‘Attached is a photograph outside the gym halls at Firrhill Secondary School. I believe John McDonaugh is third from the right in the senior football team squad. I am just in front sixth to the right for the volleyball team. The three girls to the far right of my team all went to Hunters Tryst.

Ann Smith had a twin Alan and lived fairly near you Peter Hoffmann. This photograph was taken for our sports achievements that year. My cousin Michael Kadobinskyj is the tall one to the left of the goalkeeper, but he was a bit older than me.'

John responded: ‘Tell you a story about this picture. I was the goalkeeper for most of that season wasn't great but had my moments. As we were getting closer to the final Wally Martinuik who played for one of the boys clubs (Tynecastle Salvesen or Hutchison Vale) was asked to take my place and to be honest he was better. Anyways we made the final and won; I was a substitute but never played although I did get a medal. Anyway when it was announced that the photo was to be taken I was not included in the line-up. Brian Ritchie,Grant, Russell Dixon Bobby Ellis and most of the team refused to attend unless I was in it. So in a borrowed top about two or three sizes too small for me I appeared. I'm just glad you lassies in front huddled up close so you couldn't see I had trousers on and my shirt only came over my chest. I think that's why I remembered it well.’

Peter said: ‘Nice story; and natural justice; every member of a team throughout the season is an integral part so well done your team-mates.’

It was nice to read and remember so many names.I married Dougie Brown who also went to Firrhill we got divorced in 1992 Laraine Lambie Nee Hunter