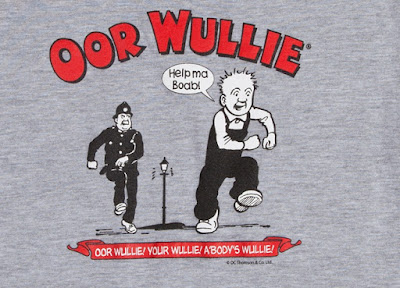 In the light of the poignant and heartbreaking death of George Floyd in Minneapolis, America, the moniker for a policeman -  'Smiler' - could be seen as being insensitive and having a less appealing image to it than if this blog had been posted a few weeks ago. But it's one of challenges when writing social history and staying true to what happened in the past, good or bad.

One of the few drawbacks of living in Oxgangs was that at times there could be a slight undercurrent of violence. When I was very young and only just in to Hunters Tryst Primary School it might be the apprehension of being thumped by an older boy who even as he grew older never lost a very violent trait of wanting to intimidate, control and severely hurt other boys and then in later years young men and then eventually men too. Having gone on to study psychology and as an educationist I’m now aware that he ticked most of the boxes for being either a sociopath or a psychopath. But, unlike many unfortunate others despite having occasional interfaces I never fell victim to any physical violence from him, managing to box clever over the years, so to speak.

Probably because I was too lippy and was reluctant to be bullied by anyone the main fights I was ever involved in were after school at Hunters Tryst Primary School outside the school gate on Oxgangs Rise – I’ve absolutely no idea why as we weren't in the same class or had anything much to do with each other but often it was with George Catterson, but I was never a ‘fighter!’

As we grew older and in to our teens some individuals saw it as a right of manhood or passage to be macho and to get into fights. Apart from wanting to protect life and limb the thought of hurting another individual had no appeal to me – I would have been too 'soft' to ever wish to inflict damage on anyone, but a few others were less so inclined.

There was a lad – a Malcolm someone from Oxgangs Park who was always spoiling for a fight with me and for whatever reason seemed to have taken against me but it never came to blows. Indeed my only recall of ever really getting beaten up was when for no accountable reason whatsoever I had walked across Oxgangs Avenue in a ‘dwam’ and from out from behind some parked cars Gilbert Fraser jumped out and attacked me from behind - before I was aware what had happened I was on the ground suffering various kicks to the head and face ending up a bit dazed with cuts and black and blue bruises to my body. When I went back home my mother wasn’t exactly pleased.

On a couple of early threads on the Oxgangs A Pastime From Time Past page several individuals talked openly about how bullying had impacted negatively on their lives and there was considerable discussion on the topic. 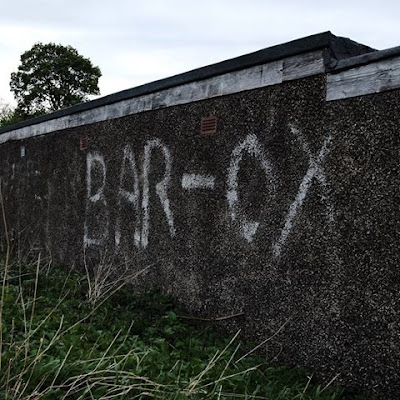 Whilst the area had various Bar-Ox signs written on to the walls of buildings I’m unsure just how apocryphal and how much of a myth the ‘gang’ really was but it’s something that completely passed me by.

Whatever, but to an extent it’s become slightly mythologised over the years.

There has been much debate over the years as to where the name came from. Paul Henderson said ‘The name comes from a local sergeant named Dick Bar who said the Ox is mine and Tiny Burns so the name was formed Bar- Ox.’ But Dougie Begbie said ‘Jimmy Catterson told me it had nothing to do with Dick Barr - it was Tiny Burns and Ronnie Hendrie who came up with the name - sort of copied from Bar-L.’ Whilst Joseph McKenzie remarked that ‘Dick Barr was one of the better polis along with George Ferguson who knew everyone in Oxgangs.’ Jayne Hinds mentioned Ronnie McPhail who had ‘…spray painted the first BAR-OX sign on the road at Greenbank as the bus came down into Oxgangs.’

Gordon Douglas said ‘It was not until I went to Firrhill Secondary for a couple of years that I met the guys who would become lifelong friends and it was not till I joined the Community Centre up at the Broadway that my friendship grew with these guys, most of whom became founder members of the Bar-Ox named by Ronnie Hendry, it was a cross between the Bar–L (which was slang for Barlinnie) and Oxgangs...' However, Terry Cameron said ‘Far be it to contradict your memory, but our take on who named the infamous Bar-Ox was Brian Stewart; it was at the time of all the Glasgow gangs - Bar this, Bar that! etc. Brian found an old Roy Rogers annual in the bins at Firrhill shops; in it there was a picture of a ranch ‘The Bar-Ox’. He sprayed it on the door under the stairs next to the Dummy Dairy and just like that the urban legend was born! The reason I know this, I was there with his brother Gary, Rod Newlands and Gerry Donaghy when he did it one Sunday afternoon in 1966!'

Terry may or may not be right but without access to the annuals I guess it’s impossible to check. Not that it confirms anything either way but Roy’s ranch itself was the Double R Bar Ranch - but a great wee tale. Afterwards I contacted a Roy Rogers specialist who has eleven of approximately twenty eight annuals; he kindly spent a few hours of his time going through them but he said he couldn’t find any reference to Bar-Ox, however the term ‘Bar’ featured quite regularly. I’m not sure if that takes us any further.

Harry Chamberlain said ‘I never became a member (was anyone?) of the Bar Ox gang. All my life I tended to stay away from any 'gang'. When I lived in West Pilton I was scared of the gang known, as I remember, as the Pennywell Gang. I’m sure if I ever met any of them.’ Thus I was similar to Harry in that (thankfully) it too passed me by; perhaps also because I moved away from Oxgangs when I was sixteen.

Monday 25th February 1971 After tea an atypical Oxgangs winter evening. I did no studying but instead a bunch of us played some football across in the playground including Boo-Boo and Les. However we had to scarper (somebody must have called the police – the ‘No Football' sign?) and Keith was too slow and got caught by the cops. Fortunately it was 'Smiler'.

Sunday 25th April 1971 Back at Oxgangs we were off our guard and got caught by the cops. It was Smiler and he gave us a bit of a tongue-lashing waving his black book at us.

From many of the comments about him on the Oxgangs Facebook page he seemed to be reasonably popular – at least for a policeman! – and generally regarded as being both reasonable at times but on occasion could be sneaky coming down hard on one or two people too. I wonder if he was partly a link to the past - not averse to clipping people’s ears or kicking them up the backside, but also part of a new wave of constables on the beat.

Alan Black said ‘I can remember him stopping us by the Broadway shops and asking us if we liked Dr Marten’s boots and how comfy they were as the police were bringing them in for the PCs – I was just glad he never asked us what was in the bag as fifteen year old me had just been in the Goodies Off Licence for supplies.’

Law Or recalled that the ‘last time I saw Smiler he was standing at Haymarket in his position of Inspector, controlling all the other cops at a Hearts home game. He looked just the same apart from the fancy uniform and what was worse he remembered me.’

John Clement remembers ‘Jack (Smiler) Simpson not only from Oxgangs but because he worked part time in the same butcher shop as me and George Ireland at Bruntsfield but only on a Saturday. Smiler was a decent enough guy most of the time but he did nick me for being drunk and disorderly at Tollcross: I spent the night at Torphicen Police Station - I probably deserved it - there was also another local cop but I can’t remember his name - he was a devious git if I remember well!’ 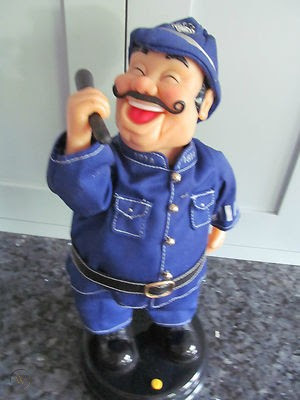 I probably would have concluded this blog saying something along the lines of just as well we (well, most of us) can smile today, but somehow in the wake of George Floyd's tragic death, it would be inappropriate to do so.

I took a photo in meadowbank london road edinburgh on nov 27 2020 and it was written outside of a flat saying bar ox i took a pic it’s now a free prints photo tile i have printed. my dad grew up in oxgangs avenue in the 60’s/70’s and i have stayed in firrhill loan since 1998. a peaceful street . love it.

i have the picture on the tile if you want the pic. contact me marckay75@hotmail.com

Paul Kaszynski is my dad. He has posted on here before.