The Happy Smile Club and the School Dentist 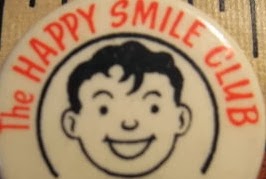 Anyone recall these badges?

I could recall the image almost perfectly, but could never find one or any reference to it. I mentioned the badge to my brother Iain Hoffmann a few months ago and he too had a vague memory of them in the early 1960s. I never owned one; rather enviously I looked at them on the lapels of others' school blazers - I recall a girl at Oxgangs Park who had one.

Over the months I've regularly visited eBay each week but with no joy. However there was a positive to this - I've grown to like badges and over the months I've made an occasional purchase. The original reason for looking at badges had therefore almost vanished and then a few weeks ago I couldn't believe my eyes - it brought a gasp from me and instantly I had joined The Happy Smile Club! The boy's face is just as I remember him - a wee bit like a young Alf Tupper or Winker Watson, but an interesting sign of the times - why no girl's face?

It appears that a toothpaste company (Colgate?) worked in partnership with local dental authorities to promote good dental hygiene. It must have been prior to us joining Mr Russell's dental practice, but I recall my first and indeed last visitation to the school dentist at Firhill who was a bit of a brute and when combined with my own cowardly nature was a powerful combination. After a titanic struggle in the chair between the two of us, the dentist managed to stick the needle in to his own hand freezing it and he had to cancel all appointments for the next two hours.

He told my mother to never bring me back.

On the way out I shouted 'Ah suppose a badge is oot 'o the question!'

Mr Happy Smile visited Oxgangs Primary School. The most outstanding memory of that visit is the guy inside the giant head wore jeans and winklepicker shoes.

He visited Barncluith Primary School in Hamilton in my first year there, in 1964. As I was born with a calcium deficiency, my baby teeth were very soft and by the time he came to our school I had already had some bad experiences at the dentist's and a great dread of same. So when the word went round that 'a dentist' had come to the school, I assumed he would be issuing summary on-the-spot fillings and extractions and hid in a cupboard in our classroom as the rest of the class filed out to the assembly hall. Before doing so I had a terrifying glimpse of this huge grinning head coming in the front door and yes, I remember the winklepicker shoes as well, although my memory has dressed him in a pinstripe suit. After his visit, my teacher opened the cupboard and, thinking it was the monster dentist coming to get me, I screamed my head off! After she had calmed me down she gave me my free toothbrush (clear green plastic handle), tube of Punch and Judy toothpaste (strawberry flavour), and a wee card you were supposed to tick the boxes in to show you'd brushed your teeth after breakfast and at bedtime, every day for a week. Also my Happy Smile Club badge, which I have always remembered looking just like in your picture!