SuperBall-Sir Winston Churchill Comes To The Rescue of The Hoffster

One embarrassing episode for The Hoffmann children was when our father in an atypical grumpy mood confiscated The Hoggs girls' SuperBall. Goodness knows what had happened-perhaps it had hit our window our some such thing? Anyway, the bold Ken Hoffmann confiscated it and put it in the middle drawer of the sideboard. I could just imagine he was daring their parents to come down to the door. 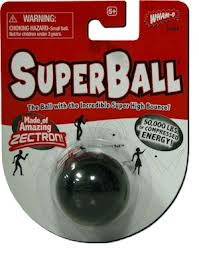 Anyway, it was such a fun toy, that the following day when he was out to work I couldn't resist sneaking it out of 6/2 and going off to play with it. Great fun and typical of me, however disaster was to strike!

For those young followers of The Stair the SuperBall did all it said on the pack-and more! Like Superman it could literally clear four storey buildings like The Stair with one bound, or should that be with a single bounce! Being un-scientific I've taken the following description from Wiki:

'A Super Ball (aka SuperBall) is a toy based on a type of synthetic rubber invented in 1964 by chemist Norman Stingley. It is an extremely elastic ball made of Zectron which contains the synthetic polymer polybutadiene as well as hydrated silica, zinc oxide, stearic acid, and other ingredients. This compound is vulcanized with sulphur at a temperature of 165 degrees Celsius and formed at a pressure of 3,500psi. The resulting Super Ball has an amazingly high coefficient of restitution. Dropped from shoulder level, Super Balls snap nearly all the way back; thrown down by an average adult, it can leap over a three-story building.'

Anyway, I'm sure you can guess what happened! In my attempts to make the SuperBall clear The Stair I ended up losing the damn thing-PANIC-what would happen when The Ogre came home from work and eventually looked in the drawer? I racked my brains-I could always throw myself off the top landing on to the shed roof? Ken, surely it must have been Anne or Iain!-Spontaneous combustion, father?-Are you absolutely sure Pater that that's where you left it?-Aye!

I realised the only way to resolve the dilemma was to buy another ball, but my mother's purse wasn't handy and I had no money. It was only shortly before that I had got rid of my Victorian pennies. I scratched my head and then the light bulb clicked-as part of my coin collecting I'd bought a couple of Churchill Crowns-I knew enough about coins that although they were produced for collectors, they were in fact legal tender-two crowns were actually ten bob, although they had cost me more than that! 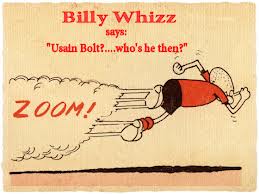 Like Billy Whizz I belted down to Andretti's at Colinton Mains. The shop assistant took a bit of persuading-I think the SuperBall cost six shillings, but I eventually persuaded her-then it was straight back home, ripping the wrapper off the Superball as I sprinted up Oxgangs Road North and back to The Stair to replace The Hoggs' ball before my father arrived home.

I remember our superb all was blue and yellow and made up of lots of tiny compressed pieces of rubber. We had such fun with it until one day it went into the road and a car went over it smashing it into the 100's of pieces it was made up of.

Here Ruth, you would have got an extraordinary height bouncing it from the balcony!

I remember very well Mrs.Hogg coming to ask for the return of the ball. I could only say that I was sorry that I could not give it back as the Ogre had warned me of the dire consequences if I did.