Comiston House by Edmund Raphael circa 1951

The under noted memories of Comiston House were posted a few years back between 2012 and 2014 on the EdinPhoto page; the vignettes make for interesting reading and are nicely illustrated with photographs of the period.

Edmund Raphael, Minehead, Somerset, England wrote: Comiston House was, for a good number of years, the Pentland Hills Hotel, which was found at the end of Camus Avenue, Fairmilehead. We used to holiday there from about 1950 and indeed I spent my college days there, 1959-1960.  I was one of the few male students who attended a hotel course at 17, Atholl Crescent, part of the Edinburgh College of Domestic Science."

I took the two photographs with a Box Brownie which I borrowed from an aunt, when my mother and I began to holiday at the Pentland Hills Hotel. The photographs probably date from 1951, I'd guess with confidence. The garden view was what you saw from the house over the natural surface of the driveway.  There was a large lawn, then the rose garden beyond, which was carefully tended by one of the hotel residents, Mrs. Dobbin, who had been a professional botanist.

The hotel was mainly for residents, spinsters and widows, although there was one very smart old chap, Bill Cadman, who was from Manchester and had begun life as a cleaner in theatres. He took an interest in dancing and eventually owned a number of Locarno ballrooms. His daughter married and moved to Edinburgh, so it was natural for him to follow, when his wife died. Mr. and Mrs Lyon were resident for a number of years, he being Principal of Edinburgh College of Art for some considerable time. Another resident was a hugely eccentric Lady Moir.  She had a suite where her meals were served.  She only left her room when residents were in the dining room. She must have been rather conscious of her entire look; a face caked with white powder, bright red lips and dyed red hair with red turban surmount. She had a most peculiar walk, which I'd have difficulty to describe. The hotel had one room for non-residents (Room 6) which was oftentimes occupied by Dame Flora McLeod of Dunvegan Castle.

The House and Staff

The beauty of the house was, that old Mrs. Gray had bought it fully furnished and had not considered it necessary to redecorate. Granny Gray, her daughter, Mrs. Leask and her son, Sinclair, lived at garden level, whilst Mr. Leask had an attic room, alongside the three maids (nasty Rose, lovely, fat Janet and hugely timid Elspeth) who were from an orphanage. Granny Gray must have done rather well as she bought Cissy Leask an Armstrong Sidley Sapphire, with LFS 1 as the number.  Cissy was disabled, so the car had been especially adapted.  Sinclair was an only child, a couple of years my senior and rather something of a snob, as he was at George Watson's.  I was quite friendly with him. The toothless Head of Staff was Mrs. Brown, who lived at the coach house, with her son and daughter, and Mrs. Gray's son.

Allan Dunnett, Berwick, Berwickshire, England responded: I was interested in the entry by Edmund Raphael concerning the Pentland Hills Hotel. In 1963 my mother was the cook in the hotel and we lived across the courtyard from the mentioned Mrs Brown.

I too knew Sinclair Leask (mentioned by Edmund Raphael). Sinclair used to run around in sports cars which I used to repair on occasions. One of the resident guests in the hotel was a Mr McDowell.  He was an American lawyer, one of the few who was allowed to practice both in the U.K. and the United States. 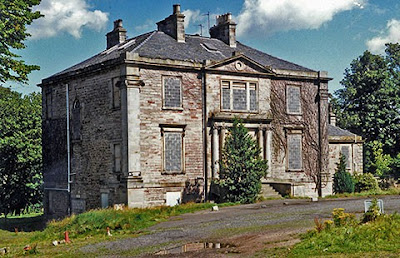 Here is a photo of the hotel, all bricked up in 1990.  I've not been back there since then.

The buildings at Coach House Square had originally been part of Comiston Castle, a listed building with turret.  The castle was some distance away from the Pentland Hills Hotel. 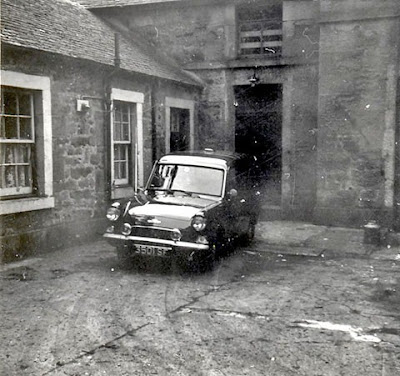 The door behind the van was the entry to a Home Guard Club, with a lounge bar and two full-sized billiard tables upstairs. 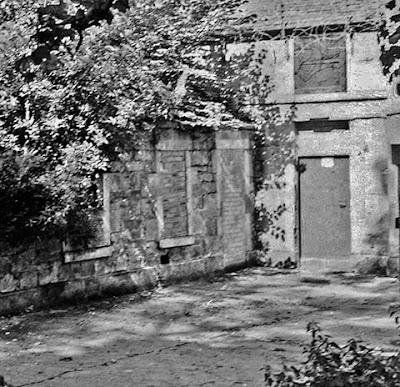 This is how the square looked, with the buildings around it bricked-up in 1990.

Kate Tubb also wrote: My dad, Michael Deignan, lived as a lodger with Mrs Gray, at Crighton Place, Leith Walk. When she moved to the Pentland Hills Hotel, my dad moved with her. She treated him like a son and he lived with her until July 1937, leaving the day he married my mum. I remember visiting Mrs Gray.  She told me to pick some daffodils for my mum.  I picked about six and she told me to take plenty. A good few years ago I asked my husband to take me to the hotel to see what had become of it. I felt very sad to see it blocked up.