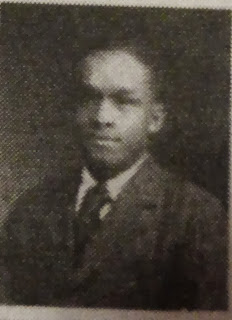 Whilst editing The Stair into a book format (1 October, 2013) I came across the following extract from the Lincoln University Centennial Alumni Directory(1954)


This puts a slightly different interpretation on one or two points in the vignette on Dr Motley on 16 December, 2012. First of all he married his wife much earlier than I had surmised-in 1929, not very long after he came to study in Edinburgh. And second that he was an army captain in the Royal Army Medical Corps between 1940 and 1946. The standard period of service in this unit was seven years which ties in with these dates. So clearly he served in the British Army rather than the British or American Navy. He would have needed to have trained for 6 months at RAMC Depot, Crookham Camp, Aldershot.  Immediately after leaving the army he would have sought work, so perhaps he either joined a practice in Edinburgh or set up on his own at Oxgangs. Again, I’m surmising here, but I wonder whether he recognised that because he was black and because many people would be prejudiced it would be very difficult for a local medical practice to appoint him and that he therefore realised he would have to branch out on his own and start his own practice? 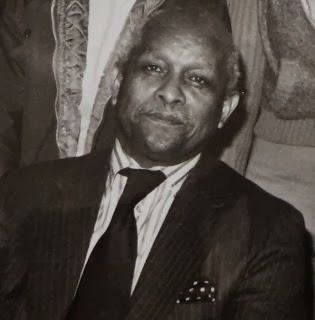 Comment From Neil: Great article Peter, thank you. Dr Motley was always a classy person, we were fortunate to have him in Oxgangs. Your article got me thinking about the dentist - Dr Russell if my memory serves me correctly. Never had a problem going to Dr Motley but hated every visit to the dentist, Dr Russell !!

Response: Aye-I can empathise-I did a swift paragraph on Mr Russell when I was wrapping up the The Stair back on 23 December, 2012. As part of the blog's raison d'etre a charming book well worth searching out is Leaves From The Lives Of A Country Doctor by Clement Gunn set in Peebleshire a century or so ago-a rather lovely read-you won't be disappointed! :-)
Posted by Peter Hoffmann at 1.10.13

Great article Peter, thank you.
Dr Motley was always a classy person, we were fortunate to have him in Oxgangs.
Your article got me thinking about the dentist - Dr Russel if my memory serves me correctly. Never had a problem going to Dr Motley but hated every visit to the dentist, Dr Russel !!

Hello, my name is Richard Cropper and I`m so glad to have found your page via Lost Edinburgh. I was brought into the world by this lovely man on 29/10/62 at 2B Oxgangs Green. My younger brother was also delivered by Dr Motley on 29/1/65. My late Dad remembers rushing along Oxgangs Avenue when my arrival was imminent,knocking on the door of Macalester Cottage. Always unhurried, "Calm down Mr Cropper, I`ll be there in a few minutes!" I continued as his patient up until about 1978 I seem to recall (We relocated to Murrayburn Park,Wester Hailes in July 1970 but still continued with AP as our Doctor). Always referred to us boys as "Professor", as perhaps to all young male children in his practice? I remember him fondly as the archetypal kindly family Doctor "How are your Parents? And your Brothers and Sister?" but I recall his diagnoses could be somewhat hit-or-miss. On other subjects on your site my first P1 teacher was Mrs Berwick, my second was Miss Gibson. My elder brother Jack was taught by Miss J M Meharry, my elder sister Lesley was taught by the same Mrs Berwick and then Mrs Rosie, and I remember the Headmaster was indeed Mr Mackenzie. I can recollect the flamboyant Miss Sulley vaguely. The Rev Jack Orr from Caiystane I remember (his son Calum was in my class. Happy Childhood days, ours was the house with the rose garden at the front. masterminded and maintained by my Grandad Joe Cropper. Anyone out there remember us? Neighbours I remember were the Colquhouns, Mrs Kersel, the Donlevys,the Bells and the Hunters.Brilliant site Peter, well done!!

Hi I lived at 52 oxgangs farm drive, my mother still lives there today and has since my dad built the house in 1957. I have just returned from a visit there over Christmas. Dr. Motley made a big impression on my early life: he was statuesque, kind and dapper. His name for me was 'small fry' and he always said 'You are the bonnyiest of all the Mckenna's'. His surgery, McAllister cottage, was a pleasure to visit. It had skittles is red leather in the surgery and I never understood why they were there. We had little knowledge of race relations in Edinburgh at that time and Dr.Motley was the only black person I knew as a child and that felt like a gift. I think he had a bike in the early days. I have many happy memories of my Oxgangs childhood and would be good to hear from others. Caroline McKenna