Thank you to Douglas Blades for allowing me to reproduce the photo below, and also to Peter Hoffmann who wrote:

"During the 1960s, the Hoffmanns had a general Sunday pattern for many years which revolved around being collected at 'The Stair' by our grandfather any time after 11am to be taken down to Portobello for the day.

We didn't have a telephone and of course mobiles weren't even dreamed of back then. Anne, Iain and I used to stand at our parents' front bedroom window to look out for our grandfather's car (Ford Zephyr Mk6) coming down the hill at Greenbank.

It's uncanny to think we could see that far from the far end of Oxgangs Avenue, but this was when the prefabs were still there and before the new blocks of flats were built which replaced them. We couldn't be entirely certain that it was his car, but there were relatively few cars on the road back then on a Sunday.

A cry would go up: 'That's Gaga!' - and we'd all rush to get ready. Sometimes of course it wasn't and we'd go back to our waiting stations."

Photo taken from the balcony of 6/6 Oxgangs Avenue

Prefabs in the foreground, Oxgangs development in the background. 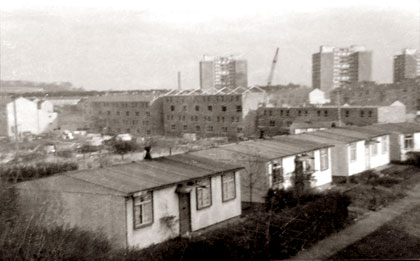 © Douglas Blades (one of 41 members of Peter Hoffmann's 'Stair 6, Oxgangs' blog site.
Thank you, also, to Peter Hoffmann for sending a copy of this photo to me.