This wonderful old photograph from a century ago shows three schoolgirls walking down Swanston Road through the farmland and fields.

There is no sign of Swanston Farm or Swanston Golf Club.

The Old Schoolhouse in Swanston Village was in existence, so perhaps the girls are heading off to school in the morning.

The Pentland Hills and the T Woods can be seen clearly in the distance.

The scree slopes of the hills were no different fifty years later come the 1960s when the Blades; the Hoggs; and the Hoffmanns stood at their living room windows looking out for the number 16 bus coming down Oxgangs Road North.

There are hay stacks in one of the distant fields and one of the girls is only wearing a blouse, so we might surmise it is late summer.

They are all dressed smartly in their straw hats; skirts; and dresses and each of them is carrying a metal case perhaps containing their school-books and lunches.

On a fine summer morn or in early autumn the walk would be refreshing and enjoyable. However, on a bitter winter's morning, in the semi-darkness or in the cold of a March morning with a biting wind it would have been a very different story. But, at least they walked together which would have eased their passage and no doubt they will have enjoyed each other's company. Still, it's a long exposed country lane and one which we at The Stair often travelled along on our adventures to the Pentland Hills half a century later and half a century ago.

I wonder where the girls are coming from as back then, there wouldn't have been many houses in Fairmilehead.

Perhaps they were sisters and lived at the old Hunters Tryst Farm.

It's certainly a very lovely photograph capturing a moment in time.

I also wonder who the photographer was. Was it set up or just serendipity? Perhaps their mum and dad wanted to capture that special moment in time to treasure and hold dear in their hearts, before the girls grew up, left home and moved on to follow life's journey.

They are all smartly dressed and don't look poor. Their outfits - straw hats, skirts and dresses remind me very much of the two girls in The Railway Children. They all look quite lady-like - composed and serene, but not prim. If there had been a companion photograph taken at the end of the school day, it might have been quite different. We would of course see their faces and perhaps being the end of the school day and free from their lessons, we might have seen them un-lady-like taking to their heels, racing downhill from Swanston Village to head homewards for their tea and back to the welcome bosom of the family home.

Because we can't see the girls’ faces it adds to the elusiveness of the subject material. It forces the viewer to use their imagination.

You can't but help wonder what happened to each girl. The First World War was a matter of months away. Did they go on to become wives and mothers or follow a career in nursing or teaching? Did they remain in Edinburgh or move on to other towns or even make a life for themselves abroad? 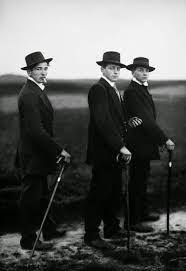 In a way, the photograph reminds me of the cover of the novel Three German Farmers On The Way To A Dance by Richard Powers which was based on an old photograph. 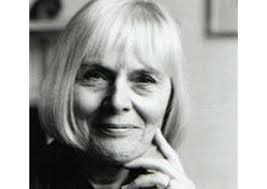 It seems to me that in the hands of a fine novelist such as Joan Lingard a rather good story might be weaved.

Postscript: In late 2017 I came across an update that revealed the premise on which I based the vignette was false - if you look closely the girls are actually carrying milk carriers!  Still, much of my musings on what happened to the girls remains true so I thought I would leave the vignette as it stands!

Beautiful picture Peter , have been following your memories avidly Unfortunately Oxgangs to me does not hold the same pleasant memories as yourself, liked Hunters Tryst hated Firrhill perhaps because I am a wee bit older but I do remember you and most off your gang try spreading your wings to other parts of Oxgangs.
People stayed in other parts like the Street the Row the Park and you may get some more contact with others.
Peter I ,as you can see am not computer literate one finger typing etc but please dont stop the stories .
By the way Pauls name is spelt
Kaszynski have to keep you clever people right please carry on.