Mercury's Chariots and Butch Cassidy and The Sundance Kid!

Until we began working at the petrol pumps at Munro’s, National Garage, Oxgangs Road North, our familiarity with the garage was playing in the line of wrecked cars at the rear end. It was a bit of a junk-yard and I suspect they were used for handy spares for repairs.

We used to climb and then clamber over a ten foot high wall from a disused and overgrown patch of ground to the side of the Store. On the garage side, the wall was only three feet high in contrast to the drop of ten feet on the other side. 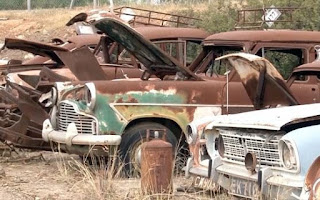 We would open the car doors of the old cars very quietly and play in the drivers’ seats kidding on we were racing one another as we wrenched the steering wheels wildly from side to side. There was always a distinctive smell inside these old cars from the sun beating down on the old leather seats. 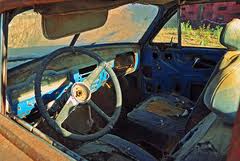 Eventually we would be spotted, usually by one of the young mechanics - Derrick Nicol was the scariest - it was quite thrilling trying to escape from them. The only real escape route was to throw ourselves over the three foot wall with the ten foot drop. No one would chase us that way - it was rather like Butch Cassidy and The Sundance Kid - would you jump off there?