Why do many of us eat less ice cream and sweets today when they are much more readily available? 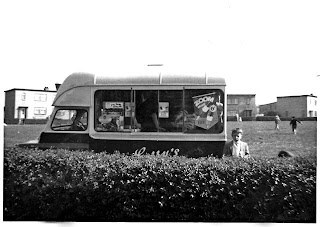 One of the daily rituals at Oxgangs Avenue was the sight, sound and smell of the regular ice cream vans which visited us. There were vans which visited on a daily basis and others which were like swallows, arriving in early summer and departing at the start of autumn. 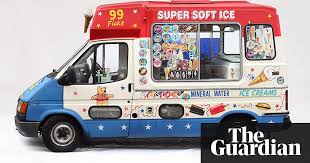 Our favourite ice cream van in Oxgangs was Tony's who ran his business from a large, blue van. Tony wasn't his real name; it was actually Mario. Was it his own business or did Mario work for someone? Mario scored a ten for his film star looks, dark hair and flashing brown eyes-a bit like Seve Ballesteros; however that dropped to perhaps a six or a seven because when he emerged from the van he was quite tiny. I only ever saw him from outside the van from where he looked down on us below, so I was never aware of his diminutive height until years afterwards when Les Ramage told me.

Mario was a lovely guy. He had that great gift, you always felt that when he served you, that you were his favourite customer. His van always looked quite classy and clean. The ice cream was good. In addition to the ice cream I went through long phases of buying Topics, and also packets of Oddfellows. I wouldn't thank you for the latter today, quite medicinal. For many years Tony's Ice Cream Van appeared at four o'clock opposite The Stair, on the other side of the road. This was nicely timed for just after school. And then in the evening, the musical chimes could be heard around seven o'clock, but now on The Stair's side where he parked outside 4 Oxgangs Avenue. This was perfect timing for a post tea, pudding.

The other ice cream van which visited us regularly was Jola's-a most odd name. There was less of a relationship there; instead it was more of a transaction. The ice cream wasn't particularly nice; however we enjoyed the Payne's Poppets. I naturally thought there was only one Jola‘s ice cream van. However, on one occasion at Morningside Road I thought I was seeing double-two stationary Jola's vans were parked in a line. I guess they were taking stock on board; one served Oxgangs whilst the other must have served another community. 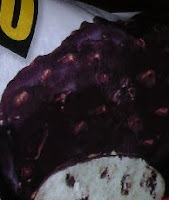 The irregulars were Mr Bongo who served up bongos. These were hard frozen balls of ice cream covered in chocolate on the end of a stick. Paul Forbes told us a suspicious story about one of the men who operated the van. 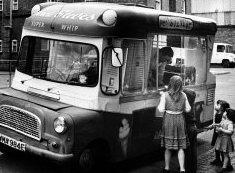 The other more interesting van was Mr Whippy who only seemed to ply his trade in the summer months. He always kept the van’s engine running. The combination of diesel, the distinctive ice cream and the summer heat was a powerful mixture. The ice cream was good and it was magical to see the way it emerged from the tap and the expert way the vendor curled the ice cream on top of the cone.


Ice cream vans are a rarity nowadays-particularly here in the Highlands where I live today. Occasionally, on a quiet summer's evening, drifting across from Strathpeffer to Jamestown carried on a zephyr breeze we hear the sound of musical chimes. About six years ago when visiting Mother at Stenhouse, Edinburgh I got a lovely surprise to see Mario driving along in an ice cream van. This time the van had his own name on it; although his hair was grey, he looked as handsome as ever. Atticus and d’Artagnan were both there and were thrilled because they'd been brought up hearing about the novelty of ice cream vans.

So, today with fridges at home and more disposable income to spend on bumper packs of sweets and chocolate, why do some of us not eat confectionery quite as often? Perhaps, it's because we no longer hear the sound of Pavlovian musical chimes to draw us in.

Comment We were just reminiscing about Oxgangs at the Sunday dinner table Toni's real name was Mario Angelucci and I always remember him parking at Firrhill School and no matter what you never got any change if it was 10p or less, Toni would always throw down a couple of chews or something to round it off ! Happy Daze!