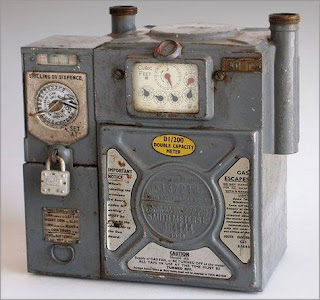 Peter, Peter Gas Meter runs the rhyme and nothing could be more true.

All the families in The Stair had coin operated gas meters. For the young this meant that each family had to pay for its gas by putting a shilling or a bob in to the meter. In other words, no money-no gas!

Gas was the main way of cooking for many of the families in The Stair so it was important to always have a shilling available in case it cut out.

For us, it was also important for heating up water in our old gas boiler. In the summer, when the coal fire wasn't in use then the only way to get access to hot water for a bath was to heat it up in the boiler. The boiler was quite simply a metal box that was filled up with buckets of cold water; the gas was then lit under it; and then if you'll forgive the pun  Bob's Your Uncle - an hour or so later there was enough water for a hot bath. Looking back it was actually quite dangerous, because the hot water then had to be transported from the kitchen through to the bathroom.

One of the few times we would see our mother Mrs Anne Hoffmann annoyed was if we'd forgotten to put the boiler on!

This would normally be a Friday.

Leaving for work at the Civil Service in the morning she say Don't forget to switch the boiler on at four o'clock. This was so that she could have a bath before going out dancing on the Friday evening when she needed a quick turn around.

One of the highlights in the year for families at The Stair was when there was a knock at the door and a man with a large denoted thick book would say 'Gas Man' and walk straight into the house, turn immediately right into the kitchen and open the first cupboard door on the right.

The cupboard always had a distinctive smell - a mix of gas and furniture polish because it doubled up as a storage area.

The Gas Man wasn't just there to read your meter, but to empty the drawer that contained the shillings.

The great excitement came after he had taken the reading and worked out the figure against his notebook - the gas rebate! This was important to families because in hard pressed times the money which was returned came as a real bonus.

On one occasion to the chagrin of Mrs Anne Hoffmann was the time she didn't receive a rebate, but instead had to pay the Gas Man instead!

I had discovered that after the previous visit that he hadn't replaced the padlock properly so I could easily pull out the drawer and take out a shilling any time I fancied a treat from Jimmy's Green Van!

It could have been worse I suppose - I'd imagine any kind of fiddling with the gas was a criminal offence - we, or should I say, I, probably got off lightly!