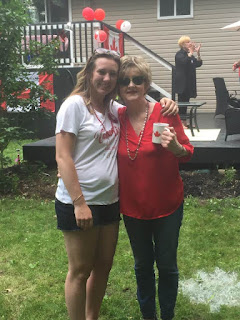 ‘Just taking an opportunity as I write at my desk (Autumn, 2017) (at work...still working full time), mostly because I have a great job, friendship with co-workers, a super boss, and a single "lass" who will likely or eventually walk doggies to fill some time when I do retire, but for now happy and able.

I have to admit although Jean Douglas (8/3 Oxgangs Avenue) gave me your book (The Stair) last year when visiting, I had thumbed through it a little but not had the opportunity to really read it more thoroughly until now, after leaving it somewhere else. I can only think that undertaking this venture your BLOG must have been a busy item. It is wonderful that so many kept in touch. Congratulations on your work.

We were one of the originals at 6/4 Oxgangs Avenue. 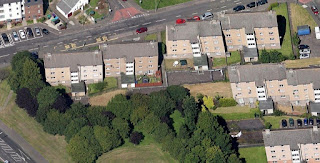 My dad was good friends with Les Ramage (Senior) in the 4 block as well as the family across our hallway, the Stewarts - the chap was a policeman.

We were a family of five - my parents, my brother John, sister Audrey and me.

I was 8 and both siblings 13 and 10 years older. They both got married and as it was once family downsized we had to move to smaller rental space hence going to the flats at Firhill – ‘the village in the sky’. 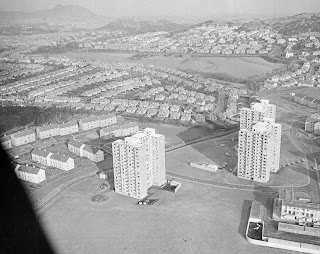 I’ve been friends with Jean Douglas all these years and will be seeing her when I am over next week (Autumn 2017). We leave Friday going with my sister to visit cousins in England.

My daddy was a very social man - a wonderful man - I was indeed a daddy’s girl and he passed 22 years ago on October, 23rd.

My mum could not settle there at that point in her life and not knowing that she was mentally not stable at the time, but we were unaware of her condition, she just wanted to return to Scotland. Dad had enough saved to send my mum and me back to Scotland.

Sadly staying with friends my mum was hospitalised (she had a breakdown and very sadly was in Bangor Hospital for 36 weeks) and I was shuttled away to stay with an aunt and uncle, then on to neighbours I knew prior to leaving for Canada. (We lived on 41 Whitson Road before going to Canada and the Cruikshank’s were neighbours and extremely kind to mind me).

My dad had to save monies to return after another 4 months. My sister and brother were working in Canada.

Once my dad returned we lived in a couple of little rooms and then secured a home and that was 6/4 Oxgangs Avenue and Mum was allowed out of hospital and my sister and brother came back from Canada.

After my brother married in 1960 he returned to Canada and had two children. 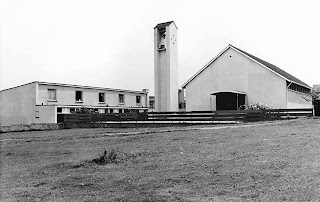 My sister Audrey married in 1961 hence your mum (that gave us a smile when I told my sister about your mum (Anne Hoffmann, 6/2 Oxgangs Avenue) and Molly (Swanson, 6/1 Oxgangs Avenue) pushing the pram up to St. John's Church to see the bride). 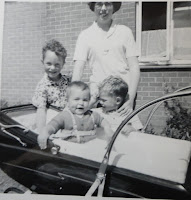 That was quite the tradition; whenever there was a wedding, neighbours would hurry off to see the bride and the kids would gather for the "poor-oot”.

I only ventured to that a couple of times. However, after not much luck at even getting a penny, never again. My sister Audrey and brother in law Alec, now married these 56 years, are still healthy and going strong. 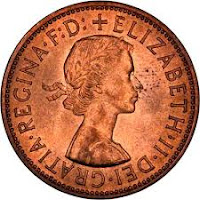 Given our family size dropped we had to move and so off we went to Caerketton Court. The Scots were not much for high rise living. The buildings were not kept well. My mum was a bit of clean freak (it did rub off on my sister and I...but thankfully I am not too fanatical about it)...I do remember every second Sunday my Mum sending me to the dry-salters (T. Frances, 29 Oxgangs Crescent) for a bottle of bleach and told "firmly" not to run with the glass bottle...then why send me...if it was going to harm me...luckily, I was a girl that did what I was told and never a broken bleach bottle to my name!

Anyway, with my brother returning to Canada, then my sister encouraging her husband Alec that it is THE place to go the plans were set and on March 15th 1967 they and their two small kiddies left for Canada.

I was to travel with them at that time and my parents were booked to travel in June (with both my siblings in Canada and now four grandkids my Mum figured she would give it another go) in Canada.

Unfortunately I had a problem with my medical and they changed the date for my travels to April 9th, 1967so at 17 I travelled on my own and went through immigration in Montreal to a new life in Canada. Hard to believe 50 years ago on Canada's 150 year of celebration. It has been a good life (like most lives and family the ups n downs happen, as well as unforeseen circumstances. But that I believe could be one's fate anyway). 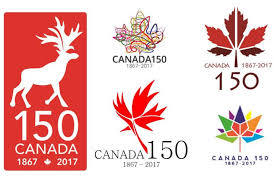 In the last say, 15 years I think I have had about 8 trips back to the UK...I have to say, perhaps it is that in as much as I have a very nice life in Canada.  Married here, now divorced, one son Gavin (he and his wife, Alyssa are both teachers) and two grandchildren, Kieran almost 13 and Tayla 11...and many wonderfully incredible friendships...when I return to Scotland, I get this ‘’hard to explain" feeling ..it is my goodness this is "home"!

Jean and I played and spent time together a great deal prior to secondary schooling and yes, all the Douglas family were lovely. Jean's mum is still living on her own and in her 90's. Sadly her dad passed away at a fairly young age. She went on to Boroughmuir and I to Firrhill Secondary.

From the time I was about 10 I wanted to type and was grateful for the commercial subjects classes at Firrhill. 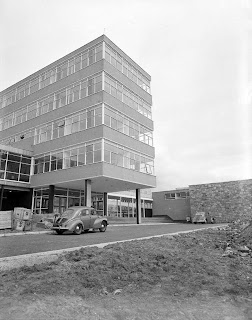 I felt fortunate that I knew what I hoped to do for a living, at least start doing as a career and was glad of good marks in all commercial subjects. I started working as like many at 15. My first job in a  stockbrokers office in Charlotte Square...lasted a year but there, met a lovely friend there, that I still keep in touch with after all these years.

I moved on to Olivetti business equipment ..only a year there and again made a wonderful friendship with an older woman whose family welcomed me with open arms and I still kept communications and a few visits to her until her death three years ago at age 90.  I do believe the paths you go down are what is meant for you, good or not so good. These were most definitely wonderful stepping stones in my life that were instrumental in many ways of how I looked at life and the friendships that helped shape my life.

After my first couple of jobs in Canada working as a typist in the bank, then working for Olivetti in Canada (now closed) I took some courses in Human Resources at Queens University in Kingston Ontario.  I went on to work  13 years at  Gliddens Paint Co. then Alcan for many years in HR, then on to a Dofasco company, after a downsizing and out of work, my path lead me to my current job with Trillium Therapeutics Inc. a immuno-oncology company that has grown amazingly in the 14 years with them...and so very grateful to have such good fortune to work for a wonderful boss and incredible CEO that has created a most unique work environment.

I am very much looking forward to my trip over to the UK - we leave on Friday. Flight to Heathrow , then training to visit cousins in Torrington, Devon...3 days, then to cousins in Stafford for another 3 days...then up to Edinburgh on October 27th 2017 (in between a visit in Innerleithen to another few cousins) returning to Canada with my sister on November 5th, 2017.

As I sit back in my chair and think, well that's a bit of a ramble that you wouldn't necessarily ever share, just somehow felt compelled to say what happened to us after the openness of life stories in your book, and so in a fashion, this is where the wee girl at 6/4 went to. 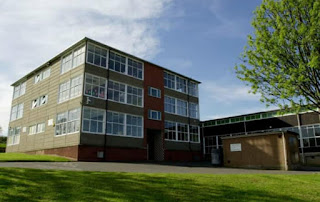 August, 2018 Postcript from Oxgangs – A Pastime From Time Past ‘Oh, such a huge thank you for this wonderful photo Alan Clark. Went right round my heart - special memories. Mrs. Williamson was our teacher before moving on to Firrhill – a very special teacher. My daddy was a painter and the company he worked for was assigned to painting the school. I remember how cool I felt when he (me being a daddy's girl) and a crew were there for weeks on end doing the work. I have thought and seen this in my mind's eye many times, but this is special to have the photo...love it!