Oxgangs - A Pastime From Time Past #9 The Summer Holidays

The Sunday Post #1 (based on extracts from the book The Stair)
The School Summer Holidays
We recall the school holidays as a time filled with sunshine, literally and metaphorically; I'm no different. It was always a delicious moment awakening on the first few days knowing that you didn't have to attend school for six whole weeks.
However, for many of us at The Stair, particularly those of us in our teens, it didn't mean a long lie in bed. Instead, we would always have a job on the go, either delivering milk or newspapers - usually the latter. 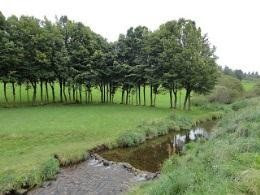 However, outwith our paper runs and Sundays when we visited our grandparents at Portobello there was no structure to each day. Games of football would occur spontaneously, but mainly in the early evenings. During the day we’d go jumping the burn, following the burn from the lower part of Redford, through Colinton Mains, Firhill and on to Braid Burn Valley.
Small villages would appear in The Field (behind 2-4 Oxgangs Avenue and adjacent to Oxgangs Road North) where the girls would drape blankets over the perimeter fence to form tents.
Sometimes families packed a picnic and some blankets and headed off to Braid Burn Valley for an outing. We’d go far into the valley toward the grass steps at the outdoor theatre. An outing wasn't an outing without the children rolling over and over tumbling down the grass steps from the top to the bottom of the valley floor. Our picnics wouldn't include anything more than a sandwich and some orange squash.
As we grew a little older, there were other adventures to be sought out - Happy Valley Pond at Craiglockhart; the Craiglockhart Hills (The Craigies) and the Pentland Hills too. 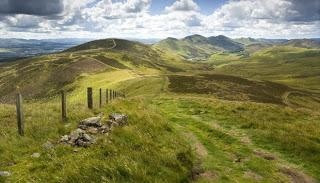 If we ventured deep into the Pentlands, apart from the occasional plane overhead, you entered a different, quieter kingdom. It was a world where the air was fresh and light zephyrs blew through the gently swaying grass; sheep grazed on the hillside and birds flitted through the air. Stevenson wrote of the whoop of the curlews and they continue there to this day. On a visit to Swanston in autumn, 2012 I ventured there for old times’ sake and watched the birds still floating on the breeze, the way they did over a century before.
The Craiglockhart Hills are a delightful set of small hills just a fifteen minute walk from Oxgangs across Colinton Mains Park sports fields and the burn and through the old City Hospital grounds. 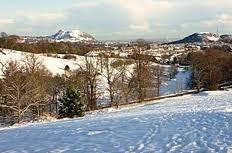 As with the Pentlands, we only visited these hills during the summer months. In later decades Alison (my wife) and I used to visit the Merchants Golf Course when the winter snows were there. Indeed she was the most exuberant sledger there - even when seven months pregnant with Atticus, much to her sister and my concern.
As with the Pentlands, when we visited The Craigies they always felt both familiar and unfamiliar and I always felt a certain sense of apprehension and excitement.
We would only visit them once or twice each summer. Part of the excitement was that we (always visited as a group) might bump into other older, bigger boys who could be menacing.
And second, because of the Merchants Golf Club groundsmen on their tractors. If they saw us they would try to chase us away; this always gave us a real buzz. On the blind par three third hole we'd sprint unseen on to the green, place a golfer's ball in the cup as if they'd achieved a hole in one and then hide in the woods. The golfer would search all around for his golf ball before taking a desultory glance in the cup followed by a merry jig. 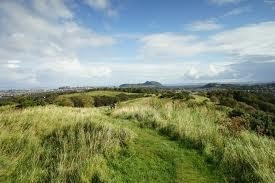 Standing high up on the top of one of the Craiglockhart hills, quite close to the edge and looking down at the long grass on the valley floor below, with the gently swaying grass was quite mesmeric and hypnotic. Such was the effect I thought how easy it might be to be drawn over the edge. Just this week reading Richard Holloway's 'The Last Bus' he recalls experiencing similar feelings whilst up on Arthurs Seat.
It was great fun being up on Craiglockhart Hill because it would have been a sunny day which had attracted there in the first place. 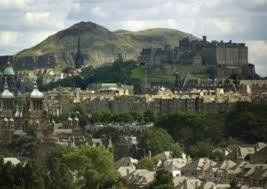 Sitting high up on the dry ground with the grass gently swaying and the sun beating down and looking out over 360 degree views enabled us to take in the panoramic view and enjoy everything that is wonderful about the city with all of Edinburgh laid out before us. Being a clear day we could see clear across the River Forth to the north and the Highlands; turning around we could look to the Pentland Hills and to the south. As a boy I was getting my bearings, locating and fixing the world; it was a moment of meditation and contemplation.
Comment from Ruth Kaye: 'I always remember the summer holidays being sunny and warm although I am sure that cannot be true; it's obviously the rose tinted glasses. Like you I remember disappearing for the day with your parents having no idea where you were or how to get hold of you and we would then reappear at tea time'.
Comment from Pat Rafferty: 'At the time I loved the openness of the area - the hills, the walks and the hours spent on the Pentland Hills or Hillend and the Braid Hills too. As a family we used to go to Spylaw Park, Colinton with a picnic - soggy tomato sandwiches and a bottle of water which we all shared but I loved it and as there was seven of us we could play rounders too - great fun!'

Comment from Graeme Robb: '
You catch it perfectly. The freedom we had. Meet at the lamppost outside number one tell the younger kids they can’t play because we’re big boys. Off to the Braids to play Japs and Commandos or Best man Falls. Up into the Pentlands following the burn over Swanson to find a good spot to guddle for trout or beside the range at the pond collect tadpoles. We would be away all day sometimes with provisions but mostly not. No one worried they know we would return when ready. My kids and grand-kids unfortunately don’t have that freedom, shame.
Posted by Peter Hoffmann at 29.7.18