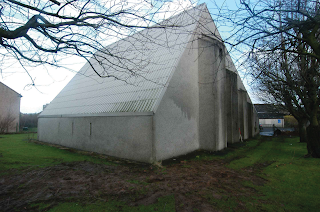 One great bonus about living at 6 Oxgangs Avenue was that we were located almost opposite St Hilda's Episcopal Church, alas no more.

It was an iconic building in its way - built in 1966 to a very modern design which was quite cutting edge.

Weddings were held on a good number of weekends and were family affairs for all of us because the mums and sisters would come out of 2, 4, 6 and 8 Oxgangs Avenue stairs to watch and enjoy the proceedings; they particularly liked to discuss the brides' dresses.

The fun for the kids would start when all the photographs had been taken and the formal black cars would begin to depart.

Oh the excitement when the cars moved slowly off! - will they, won't they?

Then the car window slowly winds down and the groom's hand emerges to the excitement of perhaps twenty kids waiting - as the car goes by the half crowns, florins and shillings flew out followed by an almighty scrum - pennies and more from heaven! 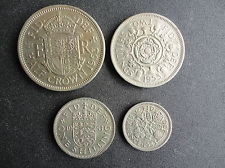 When the average pocket money might be around two shillings this was big money. I always felt the greatest largesse was shown by the fathers of the bride and groom, but we could be surprised at the amounts that came from the lesser cars too.

Was this only an Edinburgh tradition?

Did those who provided the scatter come ready prepared, because a lot of coins of the realm were scattered. 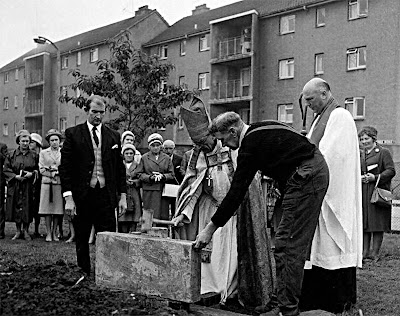 And what of St Hilda's Church?

The congregation first met in a cottage in Colinton and then moved to the existing hall in 1951.

In 1966 a striking, state of the art Modernist building was opened; and yet less than half a century later the church was knocked down only a few years after the start of the 21st century.

The coming and going of a church within a few generations says something about Christianity and lends some weight to recording these vignettes before they disappear from life at The Stair.

ps Look out for the lovely Philip Larkin poem, The Whitsun Weddings


'...The last confetti and advice were thrown,
And, as we moved, each face seemed to define
Just what it saw departing: children frowned
At something dull; fathers had never known

Success so huge and wholly farcical;
The women shared
The secret like a happy funeral;
While girls, gripping their handbags tighter, stared
At a religious wounding. Free at last,...'
Posted by Peter Hoffmann at 2.9.12

Seem to recall these were called "poor-oots" as in "pour outs" but I think I've also heard them referred to as "scrambles" (not sure where - maybe Oor Wullie or The Broons). I've nursed many a skinned knee in the street outside Coliton Mains church as a result but if money can't buy happiness, it certainly makes pain easier to bear.