The Hoggs lived at 6/4-above us (The Hoffmanns) and below The Blades. They were a lovely family. The father, George, was a joiner - he was a very quiet man. His wife was the home-maker and seemed to be the more dominant figure.There were three daughters - Christina, Maureen and Eileen. Christine and Maureen were quite close in age, a few years older than me, whilst Eileen was a lot younger-there must have been at least a seven year gap. They took after George in that they had red hair, but none of the traits often associated with red hair!

One couldn't but help like the girls. Christina and Maureen shared a bedroom which was above ours-sometimes we had fun tapping out signals on the ceiling above. Christina was a very likeable, pleasant and sensible person-she seemed quite tall in appearance at that time; Maureen was closer in age to me. I always thought of her as being quite handsome, quite fashionable and good fun-she reminded me a lot of Fiona and Liz Blades at 6/6. I remember the cool way she used to wear her Firhill School tie low down on her blouse, in a large knot.


Eileen was very thin and white-initially she may have appeared plain, but was actually quite beautiful-as she got older with her red hair set against white skin and being very slim, she looked like an artist.

Probably because of the age gap, they were quite motherly toward Eileen and looked after her.The girls were fond of my sister Anne and had a lot of fun dressing up both Eileen and Anne in exotic outfits-it was as if instead of Barbie or Sindy dolls, even better, they had live dolls of their own  to dress and play with. My sister has very fond memories of these times.

Along with the Blades we used to all work together at Bairds Newsagents at Morningside Drive. Whilst Douglas Blades used to cycle down earlier to open the shop, we all got the six o'clock  number 16 bus. Liz, Fiona and in later years, Gail Blades, the girls would come rushing down the stairs from level 2, to be joined by Christina and Maureen Hogg from level 1, to thereafter be met by me on the ground floor to cross Oxgangs Avenue to get the bus. It was good fun and made the early rises much easier. I enjoyed being the only boy in the company of four or five girls and felt part of a pretty cool gang!.There was good crack on the bus with the early morning school cleaners who were setting out to work too; they were a sparky, humorous bunch. 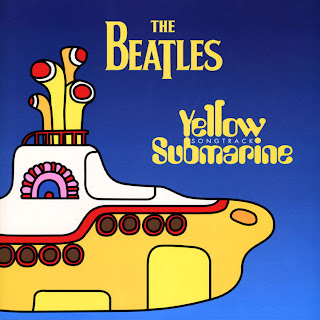 The Hoggs had cousins-two boys who were at Oxgangs Primary School who were renowned footballers and good runners. I recall them being at the Hoggs one Monday public holiday and hearing The Beatles track Yellow Submarine being played in the background. It's a very haunting track which immediately takes me back in time.

As mentioned, I think George Hogg was part of a cooperative of tradesmen who all built their own houses at Oxgangs Green; when they moved, it was a sad loss for The Stair, but they will have loved moving to their own house with upstairs and downstairs.
Posted by Peter Hoffmann at 27.8.12