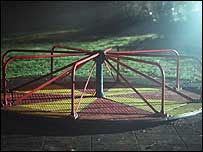 Does anyone remember the old police pillar boxes?

Fiona Blades (6/6 Oxgangs Avenue) and I - possibly also Liz Blades or one of the Hogg girls (6/4) too, used to walk from Oxgangs to the play-park at Morningside Drive. The attraction was to play on the children's roundabout. At the time there was no roundabout at the Oxgangs play-park.

It was a long walk, particularly on hot summer days, because we had to walk the length of Oxgangs Avenue and then work our way through the sweeping avenues and bungalows of Greenbank, not to mention all the way back home. 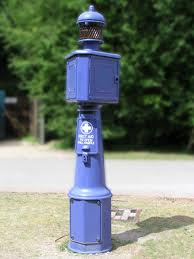 I said to Fiona do you recall us making rogue phone calls on the emergency services speaker-phone which was located along Greenbank Road?

Fiona couldn't even recall the pillar, never mind the calls.

Anyway, we would open the small door which formed the torso of the police pillar, pick up the speaker-phone - and once we heard the operator on the other end, we usually panicked and hung up - possibly on a few occasions we had the chutzpah to go further and report a kitchen fire or some such emergency. After doing this we took to our heels and ran like the clappers and absolutely flew along the road, for fear of the 'bobbies' appearing; we didn't feel safe until we reached Oxgangs. 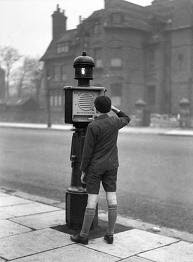 A main reason why I recall the police pillar was that I always looked forward to seeing it as I found the design to be aesthetically pleasing. I wasn't thinking in such conceptual terms at that age - all I knew was that I liked the shape, the blue colour (I've discovered some were red too) and that it represented something from a bygone era. The design is clearly based on the human body. If I could get hold of one now I'd have it as a garden sculpture. 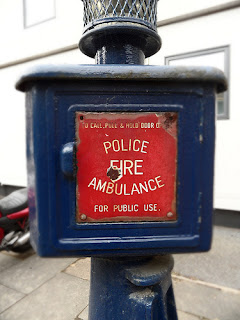 Looking back, I never saw another one anywhere else however, after doing a wee bit research, Edinburgh was a significant area for them with over 500 miles of lines laid throughout the city.

They were designed by the Ericsson company and were introduced around 1931. I think this was the design of the one at Greenbank, but I may be wrong. A mark 2 came out around 1938 and then further designs in the 1950s which are less appealing.

The idea behind them must have been to give households access to a phone to contact the emergency services - fire, ambulance or police. Those were the days when very few homes had their own telephone - also pre-police radios it was a way of peripatetic police officers out on patrol being able to contact police stations.

It was also promoted as a way of saving money and allowing the city to close twenty five police stations - yes even before David Cameron's dad was born, they were looking at cutbacks!
Posted by Peter Hoffmann at 28.8.12

As my parents were of the RC persuasion, I went to St Cuthbert's cubs on Hutchie Crossway as my school at the time was St Cuthbert's Annexe (prior to it being renamed as St Mark's). At the junction of Hutchie Crossway and Slateford Road there was a police box (not quite a Tardis but similar) which had one of those emergency phones. On the way up for the No. 4 bus home we'd pull open the phone door and yell into the mike then run away. I always wondered what was inside the boxes and whether they really were bigger on the inside. Quite a few seem to have been converted to coffee kiosks or other small retail outlets - quite clever really.