Ken Hoffmann Being Different, No 2 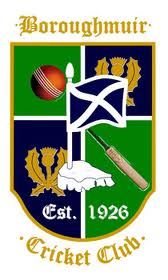 Another example of just how different my father, Ken Hoffmann, was from the rest of the fathers in the neighbourhood was that he played cricket all summer and rugby all winter. I suspect he must have been the only man in Oxgangs who did this. He played full back for Boroughmuir at rugby and cricket, for of all clubs, the Grange, perhaps the poshest club in town? Sometimes he also played cricket for Boroughmuir too-perhaps that was when he couldn't afford the the Grange subscription fees? More remarkably he was one of the oldest fathers in the area-when I was ten he was forty. He carried on playing both sports into his mid-forties when his heavy smoking and heavy drinking caught up with him.

Football was clearly the working class sport, but fathers had long since given up the game. Looking back, such pastimes were given up to youth at a very young age indeed; many of the local fathers must have been really quite young compared to fathers today. Nowadays, the value of sport and exercise are promulgated and encouraged and it’s common practice see fifty and sixty year olds playing sport. Indeed, such a large part of the NHS budget is spent on early knee and hip replacements to keep the middle aged on the tennis court and the golf course, there is a threat to start charging them!

Back in the 1960s,in Oxgangs out with bowls or for the lucky few, golf, it was unheard of to see dads playing sport or being active. An exception to this was Eric Smith coming out to play a few games of football with the kids, before tearing a hamstring; on one occasion Charlie Hanlon came out to play. Both Eric and Charlie used to sit at their sitting room windows watching the kids games-I'd notice them and it always lifted my performance-clearly wanting to play to the gallery.
Posted by Peter Hoffmann at 26.8.12