As August turned to September and then drifted in to October the daylight available to play started to diminish, but there were still enough hours for adventure immediately after school finished. Some of the fun to be had revolved around neeps and apples. Fun for Douglas Blades, as he whisked downstairs, was bellowing out a long drawn out NEEEEP!-he did this for years-it was his trademark soundtrack and was actually quite original, I liked it, although it was less popular with the adults, especially very early in the morning!

Not many of these fruit and vegetables were grown in Oxgangs, so half the fun was that a group of us would have to venture out of the area-for apples it was mainly to Greenbank or occasionally Colinton; for turnips or neeps we would venture to the farmers’ fields up at Swanston and Dreghorn.

These trips always gave us a buzz because strictly speaking we were stealing; there was a high degree of risk- possibly even getting caught. Because of the nature of the theft-somehow it didn’t feel like theft in the normal sense of the word-I suspect this was because of tradition and partly because of the nature of the items involved (So much for tradition-I've just discovered that in Victorian times the sentence was a month of hard labour for stealing turnips!).

We weren't after these items because we were starving or desperate to have a piece of fruit. We often didn't eat the apples and sometimes they were sour. The fun was in the act. The fun was in going out in a group, searching out particular gardens where trees were heaving with apples-usually located in people’s back gardens-and then there was the daring involved in clambering into these gardens usually over fences or through gates and then stealing the apples. On many occasions we would be spotted by the owners and it gave us an enormous buzz when we would all have to take to our heels and run like the wind. After we had reached safety we breathlessly exclaimed our relief and laughter at our narrow escape as we headed for home, although there was always still a small risk that the police might yet appear. 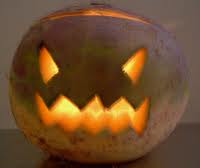 The neeps were stolen toward the end of October and Halloween-they were to be carved out as lanterns. Stealing from the farmer was more challenging-to escape from him might involve a long run along an open road and he might have access to a tractor-the turnips would be too heavy to hold on to as they slowed one down-if we had the time we would hide them in a ditch to be collected later.
Posted by Peter Hoffmann at 1.9.12