6/8 The Duffys Or Tell Laura I Love Her!

Of the eight families who were a core part of The Stair the Duffys were the last family to move in. I knew them less well than other families for three main reasons.

First because they were the last family to move in and other relationships had formed and developed. Second, because they didn't mix with the other families to quite the same extent-they were well brought up and led quite orderly lives-I don't recall seeing them out and about much. And third, because of religion.

The Duffys were the only Catholic family in The Stair and it meant that for substantial parts of the week, our paths didn't cross. Between Monday and Friday each of the four Duffy children-Ann; Laura; Mary; and John attended different schools to the rest of the children. And on a Sunday they were regular worshippers at St Mark's Catholic Church and we were away visiting our grandparents. So for six of the seven days, they led separate lives to most of us in The Stair. 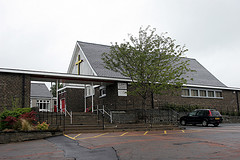 Because they took up residence in The Stair later than the rest of us, the older Duffy children, had already formed friendships elsewhere. I guess it was a similar situation to what I alluded to in the earlier blog on Norman Stewart-that when he and I began to attend different secondary schools-The Royal High School and Boroughmuir Senior Secondary School, the ties with our peers who attended Firrhill Seconday School loosened.

Mrs Annie Duffy was the head of the household-like Laura she had red hair. She seemed to be the dominant figure in the household, with Mr Duffy being relatively quiet. I liked Mrs Duffy. After I had moved away I occasionally used to bump into her in later years during the seventies when I was visiting Mrs Anne Hoffmann (Duncan). I enjoyed having a wee blether with her. I think she took a small interest in my athletics, which I was pursuing at that time.

I don't really have many memories of two of the daughters, Ann and Mary. However, I have more substantial memories of Laura and John, who was the youngest.

Laura was a very attractive red head. Each week-day morning we used to queue at the same bus stop-the one outside the doctor and dentist surgeries. It was a very busy bus stop-it was the last stop at which one could get on the number 5, 16, 4 and 27 buses.

I used to go across to the bus stop each morning at around eight o'clock. It was busy with women and men going off to work as well as children going away to schools in the city. Laura was always there in the queue, just in front of me. I always rather fancied her, but she always remained supremely aloof from me, studiously avoiding any eye contact whatsoever. I was the opposite feasting my eyes on her great beauty.

I always felt she looked down on me rather disdainfully-well who could blame her! She was out of my class. On one occasion I actually plucked up the courage to ask her out, but fainted before she replied-only joking(!)-she of course turned me down, but it at least forced her to speak to me!

And there was me trying to look my very best each morning after battling with my unruly, curly hair having plastered it down earlier with liberal splashings of water combined with the wonderful flattening qualities of the hood of an old anorak  Oh, if Laura only knew of the great lengths I had gone too on her behalf, perhaps she might have considered my request more favourably. I think not. Unfair as it may be to say, whilst I thought her lovely, I also considered her snooty!

The Hanlons lived opposite the Duffys and were the family in The Stair closest to them-particularly the parents who socialised with each other in later years. I think both Colin and Boo-Boo were quite good pals with John, because of their common interest in football and Boo-Boo also supported Celtic. I think the Blades were  friendly with the Duffys too.

The member of the family who I knew best was John, because of a shared interest in football. He was an enthusiast and a nice little player. He was a pleasant lad-modest, gentle and unassuming. He played football competitively, including for his school. On a few occasions we held large two a side football competitions in Oxgangs, with teams drawn out of a hat. We used to play for  a Subuteo Cup! On one occasion I won the 'World Two a Side Competition' with John.

Peter, thanks for a most enjoyable time this Saturday morning. Unfortunately, all of the chores I had set myself have been left undone as your blog transported me back to my (our) childhood in Oxgangs. I lived in 24, opposite St Mark's with a view of Hunter's Tryst out our living-room window.

Your reminiscences brought back a whole load of my own - I remember well the qualifying dance with you, me, Rhona (who went on to become a professional dancer) and Marion. I also remember going along with Noggin to sit a bursary exam for Royal High (when it was fee paying). Noggin was successful, I wasn't. Still, I wouldn't have ended up at Boroughmuir and my life would have been quite different.

Thanks once again. I look forward to reading more.