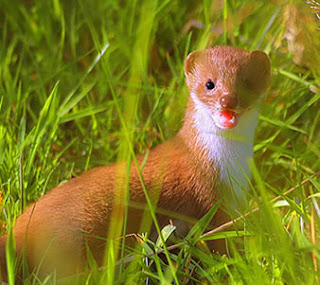 Why are some of us so scared of the unknown?

Yesterday's tall tale about the ferret reminded me of a real carnivore who resided at Oxgangs-honest guv!

Behind number 2 block of flats there were a couple of steps which led up to the back field; located there was a pipe. We were quite young at the time when a rumour began to circulate around the four blocks about a small creature that could be seen there.  I ventured out with a few pals to see if it might appear-it was too scary to go alone. We waited quietly and sure enough after ten minutes a little head popped out of the pipe; then the whole body emerged; and then it stood up vertically on its back legs-it was a weasel-well, we all screamed in terror and took to our heels in fright and ran all the way back to The Stair-we didn't look round; if we had we would probably  have seen the weasel doing exactly the same thing!

I guess it's a survival instinct-fight, fright or flight? I used to find the last one the most attractive if there was a choice!
Posted by Peter Hoffmann at 17.9.12

Email ThisBlogThis!Share to TwitterShare to FacebookShare to Pinterest
Labels: Weasel