What a wonderful performance by Andy Murray to win the US Open - respect! 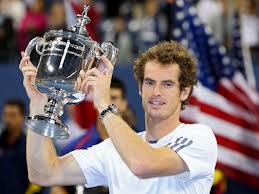 Could an 'Andy Murray' come from Oxgangs?

And today? Well, probably not.

And yet in the 1960s there were four tennis courts at Colinton Mains Park and at one stage they were a very good facility.

There were four hard-core, tar macadam courts; they were lined; with robust posts and nets; and all enclosed in a gated complex.

Over the summer months they were also manned so that a small admission fee had to be paid and bookings were properly managed and overseen. Wooden tennis racquets could be hired.

In the late 1960s each summer during the Wimbledon fortnight and in the weeks afterwards a number of kids in the area had great fun playing tennis.

I can recall aiming to get down to the courts around eight o'clock in the morning to ensure I got a court.

I would have a large plastic container filled with orange squash.

Good battles were fought out - I remember Charlie Higgins from further along Oxgangs Avenue being a doughty opponent who I played against  for money - he was the only individual who did this. I also recall people like Les Ramage being solid players.

Unfortunately, year on year, the courts slowly deteriorated - posts were bent; nets were torn down; the fence gradually got ripped apart. The facility wasn't properly overseen, managed and maintained by the council. It was also a poor reflection on the behaviour of some individuals and the culture of the community.

So why did no top tennis players come out of Oxgangs?

Easy - there was a lack of awareness; a lack of sensibility; a poverty of ambition and limited access to finance, transport, equipment and family support.

And yet, only two miles down the road at Craiglockhart were excellent tennis facilities and an extraordinary old Polish coach, the legendary, Ignacy 'Tloc' Tloczynski, who after the War was seeded eighth at Wimbledon. His most famous pupil came from St Bernard's Crescent.


Half a century later there are no tennis courts at Oxgangs, but a wonderful facility at Craiglockhart.

Two communities side by side - one working class, one distinctly middle class.

People in adjacent communities in Glasgow (Bearsden and Govan) and in Edinburgh (Wester Hailes and Colinton) live for up to twenty five years longer than their counterparts. I don't know what the two comparable statistics are for these two communities - Oxgangs and Craiglockhart.

And the next Andy Murray?

Still more likely to come from Craiglockhart or Stockbridge than from Oxgangs!
Posted by Peter Hoffmann at 13.9.12

So true Peter I feel so sorry for the kids who do not have the finance or the support, I would have loved to play tennis when I was young. You only have to look at the sacrifices that Andy"s parents made and others like them.

Can't believe Charlie Higgins played tennis. He was too busy listening to Elvis with Kenny givan. Colin findlater was quite good though.