Mercury the god of Speed, now sadly slowed down!

Why is it that when companies come up with truly great brand designs they end up jettisoning them?  I’ve mentioned in earlier posts the sad demise of the police pillar or the clunky milk drinks dispensers - other sad  losses include the Shell petrol pump heads. 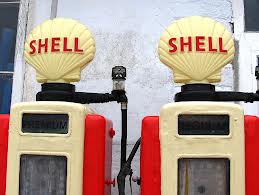 Perhaps the most missed design logo for me is the head of the god, Mercury - the winged god of speed - which was the logo that the National Garages used in the 1960s. There was a National garage which was located adjacent to the back of The Store (St Cuthbert's Cooperative) at Oxgangs Road North.

It’s a fabulous piece of design in blue, white and yellow sometimes set against a white background. The design is of the winged god Mercury’s head. The style resembles the 1920s Art Deco style in some respects and yet is a linear style with straight lines and sharp angles. It's futuristic too-today it could almost be Brad or Sir Chris' helmets!

It replaced the earlier and more obvious Mercury figure who featured as a more human form with a winged helmet-those of a certain age will recall from DC Comics, the original Flash-Mercury looked like him or vice versa, but without the costume! I suspect the Flash may well have been based on or at least influenced by the earlier Mercury figure. 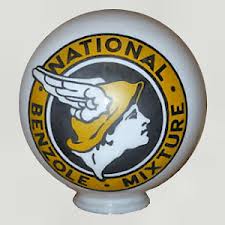 Originally these logos were used by National Benzole Company for paraffin oil, with petrol coming along at a later date. However, my Mercury figure featured a less obvious design and was a piece of art; and art it certainly was - there was a Picasso or Braque dimension in that the linear/angular style had a slightly Cubist dimension to it too.It’s a lovely and very attractive design which whenever I see it immediately takes me back to the late 1960s when we used to work at the petrol pumps at the garage.

It was Iain and Ali Douglas who were first employed there, with me joining at a later date. There was always the distinctive smell of petrol combined with the summer heat which radiated from the forecourt. We only worked there in the summer holidays and for only a season or two. These were the last days when petrol was still served by a member of staff-immediately afterwards motorists moved on to self-service. When I worked there I became confident at serving petrol, but the twin mixture of petrol and oil for motor bikes was always a concern.

On one of the summers plastic badges featuring the Mercury logo were gifted free to customers - I bought one on eBay a few years ago; I’ve also got a rather attractive plastic Mercury logo petrol pump head.

The logo reappeared decades later and was used by Scottish Fuels into the early 2000s - they didn’t have many garages, but there was one at Lochcarron in remote Wester Ross - whenever I was working there it would give me a wee hint of pleasure when it came into view - it always transported me back over forty years to working at Munro'ss, National Garage, Oxgangs Road North.
Posted by Peter Hoffmann at 12.9.12

I suppose technically the National garage was on Colinton Mains Drive, running parallel to Oxgangs Road North. I recall being sent to the garage to get paraffin from there for one of those noxious heaters you mentioned. You got it from a machine and it cost about 2/- (10p after decimalisation) a gallon and you had to provide your own container. The garage more or less backed on to my house at 216 ORN although there was a patch of waste ground directly behind it we called The Dump (adjacent to the Store - which incidentally my mate Brian Mearns's mum used to call the Cope presumably for Co-Op but she wasn't from Edinburgh). We used to climb up the wall at the back of the garage and dreep down into the Store yard to nick lemonade bottles from the crates awaiting removal and take them back to the Store for the deposit.