Did you support Hearts or Hibs?

Attending football matches at Tynecastle or Easter Road was a right of passage for many boys in Oxgangs.

Ken Hoffmann was a rugby man. I only ever remember going to a single match with him-it was Hibs v Dunfermline-how did that happen? Did he have free tickets? Was he trying to bond with his son? Anyway, I recall him getting into an argument with a Hibbie when Roy Barrie the combustible Dunfermline player got sent off-I actually sided with Ken on this occasion, because there was a sense of injustice about the decision. The other thing I admire today, from a distance, was that Ken subscribed to the philosophy that it was better to play the game than to spectate. 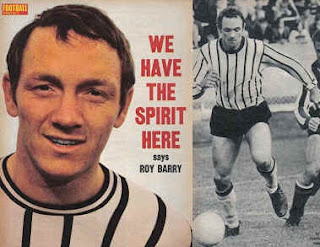 Within The Stair I think John Duffy from 6/8 attended games with his dad; he was a Celtic supporter. Boo-Boo Hanlon must have been too-see below! Colin Hanlon was a Hearts man and a regular at Tynecastle in later years. Alan Hanlon was perhaps too young back then, whilst for all his enthusiasm for football, I can't recall if Michael went along or not. Michael, Boo-Boo, Colin or Alan-if you're reading the blog, please let us know!


Douglas Blades and Gavin Swanson were completely uninterested in footie-indeed they may never have ever kicked a ball in their lives. Although Iain played a wee bit he only ever went to a match on rare occasions-he was most definitely a Hearts man-I seem to recall us going to see Hearts v Brechin City of all matches on Saturday, 27th January, 1968!

For a season or two I attended Hibs matches in the company of the Allans from 4/7 Oxgangs Avenue-this was with Andy and Gavin Allan and one or two of their pals who attended the Catholic secondary school. 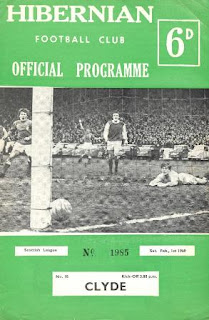 It was exciting stuff-good crowds; often it was sunny; the green and white programmes reflecting the strip; and some good players on the pitch-Bobby Duncan; Pat Stanton; Peter Cormack; Peter Marinello-there was a real buzz about such outings.


Today I'm not a supporter, but when Hearts met Hibs in the Scottish Cup Final earlier this year in May, my heart was very much with the Hearts-my instinct tells me that if I should follow any team then it is Hearts. Perversely, for a while I also used to attend Raith Rovers matches at Kirkcaldy with a slightly older lad from Oxgangs Crescent-it was good fun getting the train from Haymarket to their ground which still boasted an old siren from the War.


So was it Hearts or Hibs or indeed Raith Rovers? Well, ironically, at that time I also 'followed' Rangers because I was so close to my grandfather, but never attended one of their matches back then-indeed Ken Hoffmann stipulated that we weren't allowed to go along to any games involving The Old Firm because of potential trouble-probably sound advice.

Postscript; My local team today, Ross County, were unbeaten over 40 league matches until a week or so ago-Come Away The County!

Always was a Hearts fan and always will be. All my mates in the Colinton Mains area were Hearts fans (probably a religion thing - we were the only RC family on the street) so my brother Brendan and I couldn't really be anything else and have mates, even if it meant being the black sheep of a largely Hibee family. I took a bit of stick at St Augustine's where most were Hibs or Celtic fans but I had support from fellow Jambos like John Burns (another Oxgangs boy) and one or two others who's name's don't spring to mind. I had a mate Pud Inglis (your wee brother might remember him) who was a Hunter's Tryst and Firrhill Hibee who understood what we had to put up with as he did too - you wonder why though. My Hibee Uncle Joe (90-odd) still asks me if I still support them - (as if he didn't know and as if at 56 I'm going to change (and if I was I'd start supporting Hibs).