I don't think any of us realised quite what an interesting and exotic place Oxgangs was half a century ago.

Another of the great characters who visited The Stair was Onion Johnny. For the younger followers of The Stair, Onion Johnnies went from door to door selling onions from their bikes. The onions hung, drooped over the bicycle's handle-bars and cross bar. Early on in the day it must have been difficult to ride the bicycle and often Onion Johnny would be seen wheeling his bicycle. 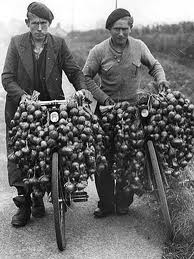 Whilst we thought he was unique to Oxgangs, there were Onion Johnnies all over the country. Looking back, I wonder how our Onion Johnny coordinated his work. Where were the onions stored in Edinburgh? How did he organise and replenish his stock throughout the day? Where did he eat and sleep? And, how on earth did he make it pay?

Having done a wee bit research, a clearer picture begins to emerge. We were actually very lucky to have our own Onion Johnny as by 1973 there were only one hundred and sixty Onion Johnnies left in the whole of the UK.

They came from Breton in northern France, bringing across the distinctive red onions after the harvest in July. They rented local barns where the onions were stored, often not returning to France until January of the following year. So perhaps our Onion Johnny rented a barn from one of our local farmers at Dreghorn or Swanston?

Often they slept on or were wrapped up in their onion-sacks in sheds, barns and derelict houses-tough going as the warmth of summer, faded to the cold and frosts of late autumn and winter. It must have been lonely too-these weren't the days of mobile phones. Their families must have worried about them and the onion sellers must have missed their children dreadfully, as they strived to earn money to support them so far from home.

Onion Johnny-yet another example of the colourful, admirable and gutsy Hawkers, Pedlars and Salesmen who served our community and added to the richness of life at The Stair!
Posted by Peter Hoffmann at 25.10.12