Few and Far Between and Ken Hoffmann Being Different No 4!

Family outings, few and far between?

The Duffys at 6/8 certainly did things together, because I would see them all go off to St Marks Church as a family on Sundays. I don't recall The Hanlons doing family outings. With nine members in the family it would have been near impossible for The Blades, but again, if there was a large number of them seen together, it was usually for purposes of church attendance. When there were fewer Blades family members I recall going as a very wee boy when Helen Blades pushed her father in a wheelchair up to the army's polo fields on family walks. With The Hoggs, it would be the four females-I don't recall George out with them very much. Similarly, with The Stewarts it would be more Mrs Stewart and Norman-perhaps that was to do with Mr Stewart's shifts as a policeman? The Swansons were the exception-the one family unit in The Stair who did everything together as a family-if it were out-with the working day, then one always saw them together as a group-whether it was visiting the granny, going to church or in to town. The Hoffmanns were broadly similar to the rest of The Stair, however for intermittent periods of time we all went to my grandparents' house each Sunday-because my father objected to this he often wouldn't come along (ironically and rather sadly this suited us!)-also when he was away at sea he simply wouldn't be there.


These patterns may well have been quite common for many of the families who lived in Oxgangs during the 1960s. The lack of money is arguably a factor. Cars are related to this and are an interesting factor; they very much served as a literal and metaphorical vehicle for bringing families together throughout the UK during the decade, but were few and far between in Oxgangs. Their absence can be seen clearly in some of the photographs which I have shown on the blog. During the 1960s, no family in The Stair had a car. 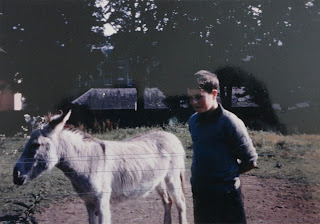 Whereas, because my grandfather did have a car, we regularly went out for Sunday runs or picnics to Peebles, West Linton, Fife and East Lothian. Looking back these were lovely times and reflect really well on our grandparents' sense of family. 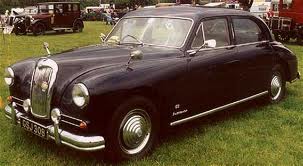 The one brief exception to car ownership at The Stair during the 1960s was that for a very short period of time-was it a few weeks, we had the use of a black Riley car-I don't think we owned it-it may have been my grandfather's car? I recall there was a problem with the exhaust and Ken Hoffmann had the crazy idea that it could be held on with chewing gum; so he bought packets and packets of gum for the kids to chew on and then tried to affix it to the exhaust! Ken Hoffmann was completely 'handless' when it came to do it yourself! I wait to hear from Mrs Anne Hoffmann (Duncan), but was this the same car which went up in flames? 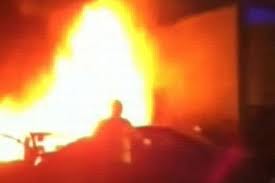 When my grandparents went to Dublin on holiday Ken Hoffmann had the use of their car. Unfortunately it wasn't insured for fire. Even more unfortunately it went up in flames outside The Stair and was a complete write off!

Does anyone know if chewing gum is combustible?!

ps More on family outings in a future blog.
Posted by Peter Hoffmann at 10.10.12

No-it was in fact a Hillman Imp!