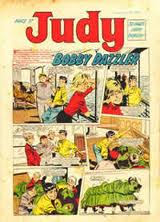 I mentioned how Judy was one of the bundles of comics which I used to receive from the Blades'. It was a sister comic to Bunty and although not quite as good, it was always a solid read. Indeed, it must have been because the comic ran for over thirty years from 1961 to 1992.

I recall Wee Slavey; Sandra Wilson stories; and there was always a girl from a deprived background trying to achieve her dream despite having to face tough obstacles. Indeed the themes in both boys and girls' comics were common and probably had a powerful socialisation effect on millions of boys and girls who grew up during the 1960s-themes of courage; resilience and fortitude; friendship; selflessness; kindness; a sense of fair play and so forth.

Because these comics were very much a British thing reflecting our culture I wonder how they may have impacted on us and how it may have made us different to other countries-and of course with their demise and the influence of computer games that are played by young people throughout the world whether that will result in a greater homogenisation? I came across this interesting little snippet:
I don't know where you are located, but I thought I might be the only girl who read 'Judy' who lived in the U.S. I lived in the farm region of Illinois, south of Chicago, and I got my Judy magazines from an English pen friend. She used to bundle up several months of her issues and wrap them in brown paper and string and send them by boat. They took weeks to arrive and when they came to my small country post office it was indeed a red letter day for me. I loved them and would sort them into the right order and read and read and read. I loved all the stories and there was just nothing like them in the states. - Sharon Williams