An important feature in the sitting room at 6/2 Oxgangs Avenue was the large Singer sewing machine which sat in the far corner. It mostly was used as a piece of furniture with the rented television set sitting on top. It was just the right height to enjoy the small screen from either the two chairs or sofa. When it was used by Mrs Anne Hoffmann for dress making then the room became somewhat chaotic-the heavy television had to be moved and the floor space was completely occupied-dress patterns lay pinned on top of material waiting to be cut, before sown together on the machine. 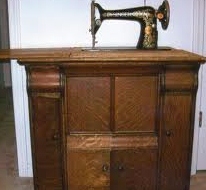 When the sewing machine was in action it was a good opportunity to open the far left hand door which revealed five or six drawers which contained some interesting serendipities. Medals lay in one of the drawers-they must have been presented to Ken Hoffmann from his days in service in the merchant navy during the second world war. They were identical to those below. He never spoke about them. I never asked. I don't know what happened to them in the half century or so since then.