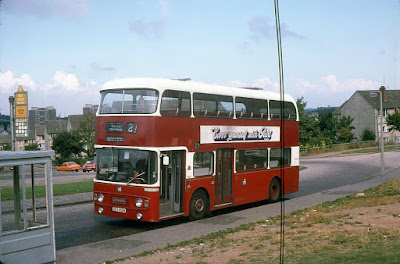 Of all the buses that served Oxgangs the loveliest route was probably the number 27, just squeezing out the number 5.

Despite the smoke it was always worth sitting upstairs to take in the views. 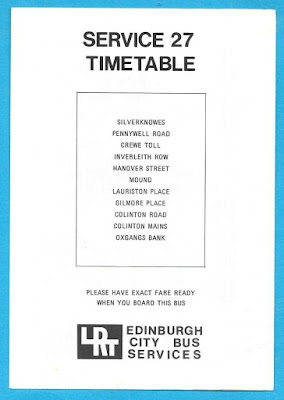 The number 27 bus wound its way down past some very lovely houses at Craiglockhart, past Meggetland and the Union Canal, and on through the wide avenues of the stone built houses at Polwarth; and from there on through Tollcross to George IV Bridge and down The Mound, with its majestic views over Princes Street. 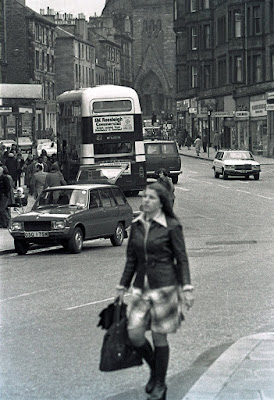 Once the bus crawled over the crest of George Street you could see beyond to the Forth and in the far distance the Highlands to the north, before, like a yacht, it sailed further down Dundas Street and along Inverleith Row past RLS's birthplace at Howard Place and on to the Royal Botanic Gardens, always a popular stop.

As a family, the gardens were as far as we ever travelled for occasional picnics. 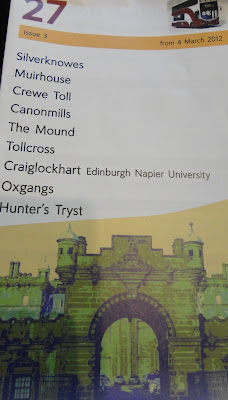 The bus of course went further, indeed all the way out to Silverknowes by the sea: I wonder if any residents from The Stair were adventurous enough to have travelled that far for a family outing to there or to Cramond beyond? 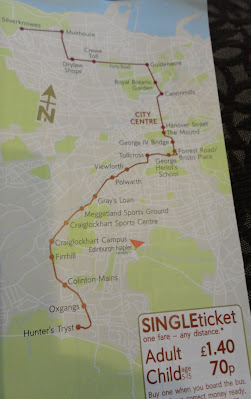 When I played football for Hunters Tryst or rugby for Boroughmuir, the matches were often held at Meggetland, so I took the bus from Oxgangs. 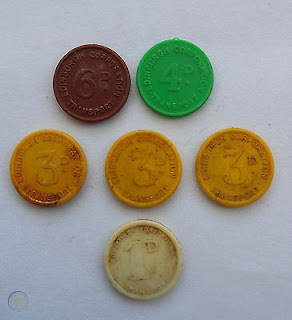 With our bus tokens clutched tightly in our hands my team mates and I were optimistic and slightly apprehensive, but I always looked forward to the game. And then come the summer of 1968 the 27 took the Hunters Tryst School athletics team down to the excitement of the Edinburgh Interscholastics Championships at Meggetland (joined on the bus at Firrhill by the Oxgangs Primary School team). Not only were some of us getting an afternoon off school but there was the great buzz of being able to compete.

Perhaps my father was unemployed at the time but he was able to come along to Meggetland that afternoon and spectate - a happy memory - as I was lucky enough to win the final and it was a rare occasion to be on the receiving end of a little praise from him.

I recall him back at 6/2 laughing whilst telling my mother that during the final he overheard one of the judges saying Here comes the bare-footed kangaroo!

I enjoyed travelling home on the 27 clutching my treasured little enamelled gold pin flag and he had the good sense to sit apart from me and my team-mates on the ride back to Oxgangs - Chariots of Fire on a small canvas.

I also took the Number 27 bus each week day for my first two years at Boroughmuir School when I attended the Junior School which was located at West Bryson Road.

On occasions the class might have to follow part of the 27's route walking along Gilmore Place in a snake like procession for science lessons at the main school at Viewforth. 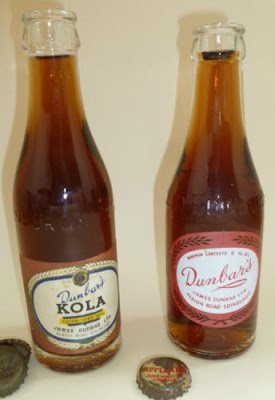 And on the rare occasions I attended Games at Meggetland - usually I was skiving - it was the 27 which I was able to take home afterwards, but not before purchasing a dinky bottle of Dunbar's juice and some sweets or crisps from the stable door of the groundsman's wife's bungalow where she ran a small tuck shop for pin money.

But it was always quite pleasant on fine days sitting on the warm pavement or leaning against a wall in Colinton Road awaiting the bus to appear - somehow on a late afternoon, I was never in any real hurry to get back home to Oxgangs knowing the bus schedule was always pretty dependable. It was the 27 bus that on Saturday 6 March 1971 five of us took to go off for a spring adventure - Ali Douglas; Les Ramage; Boo-Boo Hanlon; Iain Hoffmann; and myself getting off at the Lawnmarket to walk up to Edinburgh Castle before walking down the Royal Mile thereafter traversing Arthurs Seat all the way to Portobello to explore our Scottish heritage.

The number 27 always felt a safe bus to be on although as Karen Alexander Dean said I liked the 27 too, but it was always a bit scary getting off at the foot of the Mound at the first stop, was it Castle St? The buses used to go really quickly and if the lights were green - you had to cling on for dear life!

And of course if you were coming back home to Oxgangs from Tollcross late at night after grabbing a quick chippy, many of us stood midway between the 16 and the 27 bus stops giving us the choice of our chariot homewards. 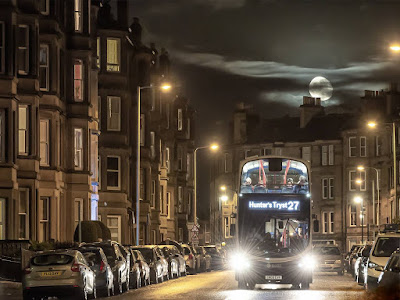 Mike Scott of The Waterboys speaks eloquently of buses.

He recalls what a lovely bus the number 23 was.

Essentially the 23 was a sister bus to the Number 27 but instead of taking in the working class area of Oxgangs, it finished its terminus at the more middle class enclave of Balcarres Street, Morningside.

Scott mentions the bus in the song 'Edinburgh Castle':

'I jumped on a bus a trusty number 23

to the Royal Botanical Gardens where a ghost was calling me

I saw a brace of weeping willows,

a burnt and withered land