Social Relationships at The Stair

Generally social relationships could be neatly divided up-adults and children.

For the most part of the decade of the 1960s, The Stair was a very pleasant place to stay. Although it was a decade of incredible change and liberation compared to any decade before or since, what didn't change was that there was an underlying respect by, for and between the eight families.

Each family realised that they had to live together in the one building and by and large everyone was generally considerate, within certain parameters. I guess at a subconsciousness level Game Theory with its management of conflict and cooperation was being played out.

Any niggles were very small beer-the extent of which was that perhaps the worst sin committed was blocking the chute. If a family managed to block the chute there would be grumblings because it meant that waste and rubbish would build up in each flat-no joke if like the Blades at 6/6 there were as many as ten members of the family living in the household. 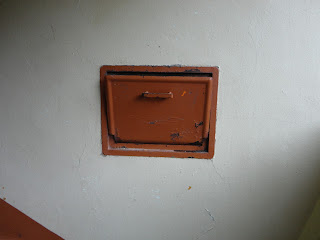 Noise was kept to a minimum, particularly in the evening. Any semi-fractious situations might be caused by children-me playing knock door run on Dougal Swanson's front door was counter productive and immature-Dougal gave such a great chase though, that I kept being drawn back to doing it-I can still experience the thrill!

Social relationships were generally kept at arms length between most of the adults-exchanging pleasantries as  they passed one another inside The Stair or perhaps on a bus. Out-with the Duffys and the Hanlons (in later years) the adults tended not to socialise with one another. In the 1970s and beyond I think the Hanlons and the Duffys belonged to a social club where they went on a Saturday evening?

None of the men from The Stair went out for a pint together-The Good Companions pub wasn't The Rovers Return.

Certainly there were no such things as being invited round for dinner to experience the decade's standard fare of prawn cocktail; gammon and pineapple; and Black Forest gateaux!

As ever, the women of The Stair were more sociable than the men. That's common as a generality, but at The Stair there were also perhaps specific reasons for this, because the men were quite different.

Charlie Hanlon (6/7) and Eric Smith (6/5) were friendly-both were non-skilled workers; Mr Duffy was at one stage a salesman (?) before having to settle for more menial work; again he was friendly with Charlie Hanlon.

As mentioned Charles Blades had trained as a doctor before dropping out and as the son of Lord Blades was an oddity in The Stair so to an extent was a fish out of water-to me he always seemed remote and I don't recall ever speaking to him, but my mother, Anne Hoffmann spoke warmly of him.

George Hogg was the one skilled tradesman in The Stair but always seemed a very quiet man who was either working or at home-he's quite a phantom in my memory bank! Again, as mentioned, by nature of work as a policeman, but also by dint of personality and incline, Mr Stewart kept himself to himself as the saying goes.

Dougal Swanson was a real family man who spent most of his leisure time with his family and would never have considered going out for a pint-like Charles Blades, George Hogg and Mr Stewart, Dougal didn't socialise whatsoever. As a grocer's shop worker, albeit possibly the manager(?) he was at one level the same social class as many others, but he may have regarded himself as being of a different class and having little in common.

Ken Hoffmann was another oddity, who had next to nothing to do with the other men in The Stair. I suspect he wasn't popular at all-at that time, rather sadly, we kids didn't like him so I don't think anyone else could have thought differently. I see him back then as being serious and grumpy-amongst his peers, there was perhaps a grudging respect-he wasn't someone to mess with! And yet as a keen sportsman playing cricket and rugby he was clearly very sociable-indeed there were a few Saturday evenings when he turned up with the whole of the cricket team!

To an extent, like Charles Blades, if it hadn't been for his alcoholism, things would have worked out differently-he would have been a captain on a Ben Line ship and we would have lived in a middle class area in Edinburgh. Anne Hoffmann was different too, being the only woman who had gone into further education having been at Edinburgh University in the early 1950s. Women straddle different worlds better than men, so. although there might be Latin textbooks or stories of the Greek Tragedies on the bookshelves, being a young mother trumped everything, creating a shared sensibility amongst the women of The Stair.

The seasons and the weather had an influence-when the sun came out, then Helen Blades came out-there's a nice correlation there! Helen loved the sun and grabbed any opportunity to sun-bathe and get a little colour.

At the rear of 6 Oxgangs Avenue our back garden was a sun-trap and was of course quiet compared to the front of the building which was north facing, with the road, vehicles and passers-by. Helen Blades; Marion Dibley (4/4) and Anne Hoffmann would often sit out in the garden on chairs or blankets with their backs to the shed wall and the sun on their faces, enjoy a cigarette and blether away-as Anne Hoffmann says who could ever forget Helen's marvellous, deep throaty, laughter. Anne and Helen were quite friendly, but with young families usually always too busy to spend much time together. We children often sat around to listen in-I can certainly recall the likes of Liz Blades sitting out too; after a while I'd get restless and go off and run around. 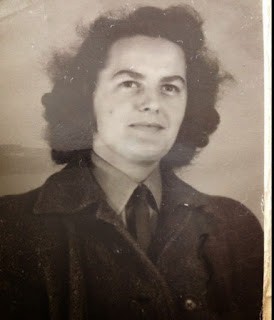 Helen Blades
Anne Hoffmann was also on friendly cordial terms with Molly and Dougal Swanson, but more at the level of having a blether if they met on the ground floor; out-with that it would only for important, serious or emergencies issues that Anne would knock on their door.

Looking back, it was more of an arms length social relationship culture which evolved-it wasn't one of the oft spoken types, of borrowing some sugar or milk from one's neighbours, but neither was it one often spoken of in the 21st Century, where one didn't know one's neighbours. I think there was a nice balance there which was effective-I also think it was broadly similar to The Stairs at numbers 2, 4 and 8 Oxgangs Avenue and beyond.
Posted by Peter Hoffmann at 29.10.12

Hi Peter, This is a very nice summing up and I think reflects the times - people respected others boundaries and did not overstep those. I think our fathers were similar solitary figures because of the life circumstances they had created for themselves due to their drinking habits. Notwithstanding the observation that they were both clearly sociable beings, I think they lived at a disjuncture from their original life trajectories. I remember my father much as you, remote. He was not emotionally present and did not have a relationship with any of his children. His relationship was with alcohol. I cannot recall ever having a conversation with him.
You have my mother well sussed however, sun-worshipper extraordinaire! I always wished that she could have lived and come here to Australia - she would have been in her element. It was 34 years since Helen died on 20 October. She never got to see any of her 18 grandchildren. Very sad.
I recall that she had a warm relationship with your mother and I am quite certain that they shared some very frank conversations. After all they were both navigating a tricky pathway, trying to provide for themselves and their children, while at the same time dealing with an out-of-control alcoholic.
I wonder if you also recall my grandmother Lady Blades coming to visit anytime? My father's brother Donald would drive her in the Bentley and she would arrive like the queen with lots of curious children gathering as she alighted. Such an interesting cultural clash.

I think they lived at a dis-juncture from their original life trajectories.

Liz-I think this is a very perceptive, illuminating and rather fascinating point which I must mull over!