Sparky; Stereotyping and The Power of Marketing and Advertising! 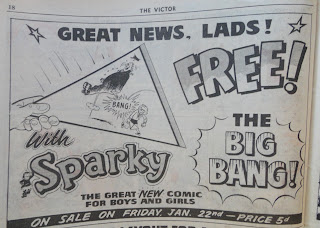 This advert for the new Sparky comic appeared in my weekly copy of The Victor in January 1965.

There is an interesting mix of stereotyping-the assumption that it was only boys who read The Victor-or perhaps DC Thomson was aware that comics such as The Victor; The Hornet; The Bunty; or Judy were effectively ruling out half the potential market in one swoop and with the introduction of Sparky for Boys and Girls was a move away from previous approaches? That said, comics such as The Dandy and The Beano were probably for both boys and girls. 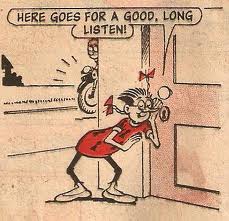 Although there were some good strips in the comic-the best was Peter's Pipes-a boy with magic pipes which could bring inanimate objects or characters in adverts to life-very handy whenever he was in a scrape; two good creations were Keyhole Kate and Hungry Horace who could eat for Scotland-by the way there weren't many Horaces in Oxgangs! The comic was initially targeted at readers younger than those who read The Dandy and The Beano. Even though I was nine years old when it came out, I must have been aware of this-The Sparky didn't quite capture my imagination-I much preferred comics with good story lines that ran from issue to issue.

At 6/2 we bought The Sparky only intermittently-particularly if there was a free gift with it-I of course got my Whizz-Bang! with the first issue-shades of me being captured by the power of marketing, advertising and of course salesmen with interesting suitcases!
Posted by Peter Hoffmann at 24.10.12