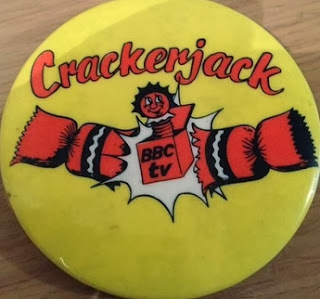 It's Friday. It's five o'clock. And it's...CRACKERJACK!

Because the series ran for the bulk of the school year from autumn until late spring, I guess the weekend proper started with our tea whilst watching the charismatic Leslie Crowther and the more pompous straight man Peter Glaze. It was a popular programme. The programme had a standard format, which was comforting in its way-it looked as if it were broadcast live, like many of the programmes from the era. It was filmed in front of a bunch of rowdy kids who all sat on the edge of their seats, almost wetting themselves, waiting for a member of the cast to purposely (Crowther) or by mistake (Glaze) utter the word Crackerjack so that they could scream back at the top of their voices, parrot fashion, Crack-er-jack!

The programme featured competitive games for teams of children-I always fancied the Crackerjack pencils which were handed out as minor prizes; also there was a music and a comedy spot; and at the end of the show the cast performed a short comic play, which incorporated pop songs from the charts-it was a good vehicle for Leslie Crowther to display his many talents-charm, cheekiness and wit amongst others.

Crack-er-jack!-Aye we were easily entertained in the 1960s, but by clever and talented performers.

Email ThisBlogThis!Share to TwitterShare to FacebookShare to Pinterest
Labels: Crackerjack