Some experts say that providing customers with too many choices is unhelpful. Malcolm Gladwell in Blink describes this phenomenon based upon work by Dr Iyengar. Perhaps this explains the delay at the sweets counter at Ewarts at lunchtimes.

The range of penny sweets or several for a penny sweets was astonishing.  Here’s a quick Cooke's Tour  from memory with one or two comments-a starter for ten-I await all your contributions!

Alphabet letters; bubble gum golf-balls-nice consistency as one broke it into it;

candy sticks-these were imitation cigarettes in a dinky little box, usually containing a Tom and Jerry card-something which would be frowned upon by the thought police today; white mice-these were a white chocolate and not sugar mice; cough candy-these had a bit of a kick and perhaps should have resided in Forgan’s the Chemist shop, however each to their own, they must have sold; dolly mixtures-definitely one for the girls!; 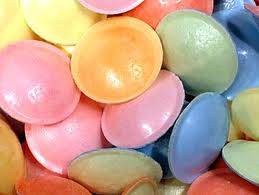 flying saucers-one for the boys-shaped like a flying saucer from Tales of Mystery-a wondrous sweet-one allowed the sweet papery outside surface to melt away only to be stung by a slightly sour powder inside the saucer-since discovered after watching the great Nigel Slater, they were first developed in Victorian times to help people to consume drugs! 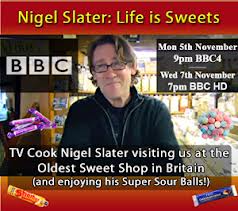 Lucky Bags-more expensive at three-pence containing a mixture of sweets and little toys akin to what you might receive at Christmas from a cracker-the magic of the experience was on opening the bag itself not knowing in advance what it might contain; kola cubes-very popular, along with pineapple cubes-these were often sucked in class with the culprit more often than not being found out-some people never learn!; milk bottles-hmmn, one for those who were different; Parma violets-very distinct and classy; mojos, fruit salad and black jacks-all very popular, these were all little chews contained in a wrapper coming in at four for a penny-popular in afternoon classes; torpedos-these came in different colours and were a small length of liquorice contained in a hard sugar shell-popular with the boys-a manly foodstuff!; 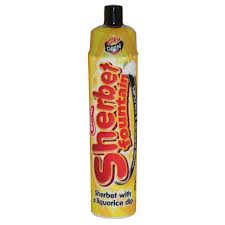 sherbet fountains-an interesting one costing something more akin to a lucky bag, it was a sherbet powder in a small cream vertical tube with a length of liquorice to dip in the sweet powder-nice, interesting and pricey; drumsticks-a square of hard chewy fruit toffee on the end of a stick; Anglo bubble gum-the best chewing gum for blowing bubbles; 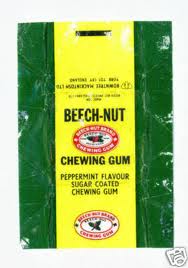 I preferred the small packs of Beech Nut-a small pack of six tablets of gum contained in a lovely green and yellow packet with a beech nut design-a really very classy little product-okay the gum and flavour didn't last and one couldn't blow a bubble with it, but the taste of it was very pleasant, indeed the whole item was aesthetically pleasing and at two pence was cheaper than the more expensive Wrigleys gums which were very popular with many kids-it was a much cooler gum-the mint was popular, but to me, so so, in taste-I preferred their Juicy Fruit which was sweet and zingy; 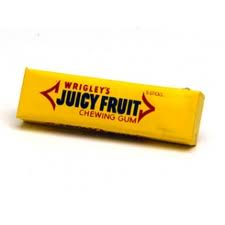 Bazooka Joes were a big square of American gum-a powerful sweet gum and excellent for bubbles as one would expect from America-I didn't like the consistency of the gum but the product was a fascinating one-the wrapper had to be opened carefully because there would be a full colour picture strip inside featuring a comic character Bazooka Joe who wore a blue baseball hat and a black eye patch-he had a variety of pals-he was a real American boy-a 1960s Tom Sawyer-there would be an amusing three to five picture, little story script, whilst in the bottom right hand corner there might be the chance to win a necklace, ring or telescope-there was also an interesting fact or fortune too-I may be wrong but I also think, a transfer (tattoo) too?-looking back it was a fascinating product, very cleverly designed and a big marketing success; 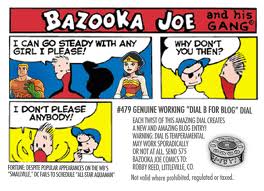 Abba Zabbas-again an interesting little product-a small packet containing tiny hard fruity sugary sweets which soon crumbled; Whoppas-an unusual small rectangular shaped chocolate flavoured jelly bar-it was a brown colour because it must have been dusted in a Bournville type mixture-later discovered they should have been prefixed by the word Chelsea, but we didn't do Chelsea at Oxgangs!;. Seashells were popular too-these were chewy sweets with an unusual consistency...

Perhaps from the above one can see why I've avoided this topic for so long-and that's without getting into chocolate confectionery which will have to wait for another week. Anyway, over to you-what was your poison? What sent you in search of a dentist for your fillings!