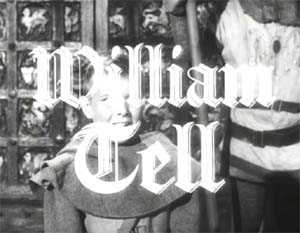 Many of the boys at The Stair were keen followers of William Tell. The series was similar to Robin Hood  in a handful of respects and yet somehow wasn't quite so good.

Like Robin, William Tell had taken a principled stance against oppression, but this time in 13th century Switzerland rather than Merrie Olde England. Second, he also had a bete noire-not the Sheriff of Nottingham, but a man named Gessler, who headed up the Austrian occupation. Third, like Robin he too was an acknowledged marksman-the best bowman around, but his expertise was with the crossbow, rather than the longbow. Fourth, the programme also had a dramatic opening-in Robin Hood, Robin's arrow hit the mark with a thud and the opening bars of the theme tune began-whilst in William Tell there was the dramatic effect of Tell's arrow hitting the apple balanced on his son's head and then the theme tune began. And fifth and last, the theme tune was excellent-Come Away, Come Away With William Tell... 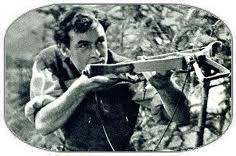 The show was on at tea-time-often if Robin Hood wasn't on in a particular week. Although, much care went into the series, it wasn't quite as good as Robin Hood-because I felt that sometimes the story could be a little plodding, however, the action scenes could be quite dramatic; indeed, unlike Robin Hood people were killed. More importantly, in literature or film, one has to like the hero and care what happens to him-sometimes I found that I didn't care quite enough for William Tell

Best of all for me, was his crossbow. A crossbow was very easy to make albeit it couldn't fire any arrows. In the summer it was good fun to go out the back with the lads from The Stair and play at William Tell.
Posted by Peter Hoffmann at 6.12.12