Christmas Day was always the best day of the year. We always spent the whole day at our grandparents’ home at Durham Road, Portobello. I therefore have no knowledge of how The Swansons; The Stewarts; The Hoggs; The Smiths; The Blades; The Hanlons; or The Duffys spent their Christmas Day.

Christmas Day is always a popular church day. Perhaps the Swansons may have attended Colinton Mains Parish Church of Scotland; The Blades one of the Baptist churches; whilst The Duffys probably celebrated at St Marks RC Church.

The drive from Oxgangs to Portobello from The Stair was always the quietest of the whole year. Sundays were normally quiet, but on Christmas Day there were few other cars on the road and we just sailed down as if we were the Royal Family.

It was our grandmother who made Christmas the day that it was. She would be there to greet us in the hallway and we would give her a formal light kiss on the cheek. Although she loved us all very dearly, she wasn't one to be effusive, instead expressing her great love for others with innumerable acts of kindness to the family and many others throughout the decades.

The hall looked resplendent-there would be a flower arrangement and the royal blue carpet had been hovered clean. As a busy artist, jeweller, pottery decorator, lace-woman and gardener our grandmother didn't want to be remembered for dusting the house-she had more important priorities. And, because her house resembled the ‘Old Curiosity Shop’, full of fascinating antiques and interesting items from throughout the world, the hall didn't need any Christmas décor. Although, I suppose one could have hung some tinsel from the African buffalo's antlers high on one wall! I lived there from the winter of 1972; whenever I invited a friend, a colleague or a journalist into the front room, their first comment on entering was always ‘What a fascinating room this is!’ 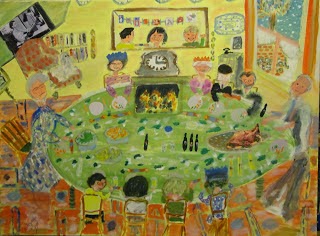 Apart from the tiny kitchen her house was perfect to host the large Christmas gatherings which took place there for over half a century. The hatch linking the kitchen to the sitting room was a clever little idea. As the kitchen had no work space or work tops at all the Buchan's pottery casseroles containing hot vegetables were delicately placed and balanced on top of the washing machine. Grandma Jo had the most wonderful grace under pressure-I never saw her get flustered. Indeed when I think about it I never recall her raising her voice in all the subsequent years that I stayed with her. The only hint of colourful language emanating from the kitchen would be from my father whipping the cream by hand. Our grandmother served up those wonderful Christmas dinners through the magic little hatch, year in and year out, until well into her eighties, when I took over hosting Christmas as the Laird 'O Plewlands; then at West Mill, Colinton; and for a few years at Moorlands, Dingwall.

The first course was usually home-made soup. This was followed by the traditional roast turkey; mashed and roasted potatoes; various vegetables; and two types of stuffing-sage and onion and sausage-meat, with gravy. Despite being a butcher, our grandfather didn’t carve the bird, which was left to our grandmother too.

The table was lovely to behold. With the eye of the trained artist the table was laid out with colourful antiques and glassware. It looked like something out of a Dickens novel. There would also be beer, lemonade and as we children got older, the excitement of having some Woodpeckers Cider too.

Around the table the craic was good-some teasing-some wit-some awful jokes-pulling crackers and several of us all cajoling our grandmother ‘Come on through Josephine and enjoy your dinner too!’ Atypically, she was always the last to join us.

There were various pudding-trifles, a mix of milk and water jellies and single, double and whipped cream. Some of us would go outside into the winter air and stroll around the back garden before we could face our pudding. She always made a home-made Christmas plum pudding and the children would ‘ooh and ahh’ when the brandy was poured on top of it and lit. The flame puffed up almost taking one's eyebrows off. To accompany the pudding there was both custard and ice cream, the latter coming from either the wonderful Arcari's or Lucas Italian ice cream shops.

Because of the number of people at the table-the very young; the young; adults; the middle aged; the old; and the very old, these occasions were quite magical throughout the 1960s. Sometimes there would be a dozen or so present. Was it Old Aunt Mary or our great-grandmother, Wee Nana, who always said ‘Now, Josephine...where's the silver spoon...you know I can't eat my pudding without it!’

And of course I've mentioned how ‘The Miser’ aka Pumpa (great-grandfather) tried to slip me a penny, which I turned down. The age range of those sitting around the table covered approximately ninety years, therefore stretching back to when Queen Victoria was on the throne.

Once Christmas Dinner was over and before the Queen came on the television, people would retire to various rooms throughout the house to allow their food to digest. Our mother would enjoy a snooze in one of the bedrooms-usually my grandmother’s south facing room, which always had a very comforting and quiet feel to it. Aunt Heather would be in the kitchen with her sleeves rolled up washing dishes in the sink, often with our father giving her a hand. Others would find a spot on a spare sofa, put their feet up and place their head on a soft cushion and shortly be happily asleep. We children might go out to the garden for a while. It was good to come out from the warmth of the house with Iain and in to the fresh cold air in the winter garden. We enjoyed having a blether about our presents or to kick a ball around. In its bare winter December state the garden had a completely different feel to July when it was lush and adorned in its summer clothes. In its hibernated state all that remained were the skeletons and structures of trees, hedges and shrubs. As the afternoon coolness descended and the light quickly began to disappear, I enjoyed the quiet and solitude of the garden and the slightly brooding presence of the season. All that separated the light from the dark, the cold from the warmth, was a solitary door. It made me think of some lines from Buchan’s The Power-House where the hero, Sir Edward Leithen is told: ‘You think that a wall as solid as the earth separates civilisation from barbarism. I tell you the division is a thread, a sheet of glass. A touch here, a push there, and you bring back the reign of Saturn.’ And then, it was braw to go back into the warmth of the house and the bosom of the family and to be reminded yet again, that it was still Christmas Day! 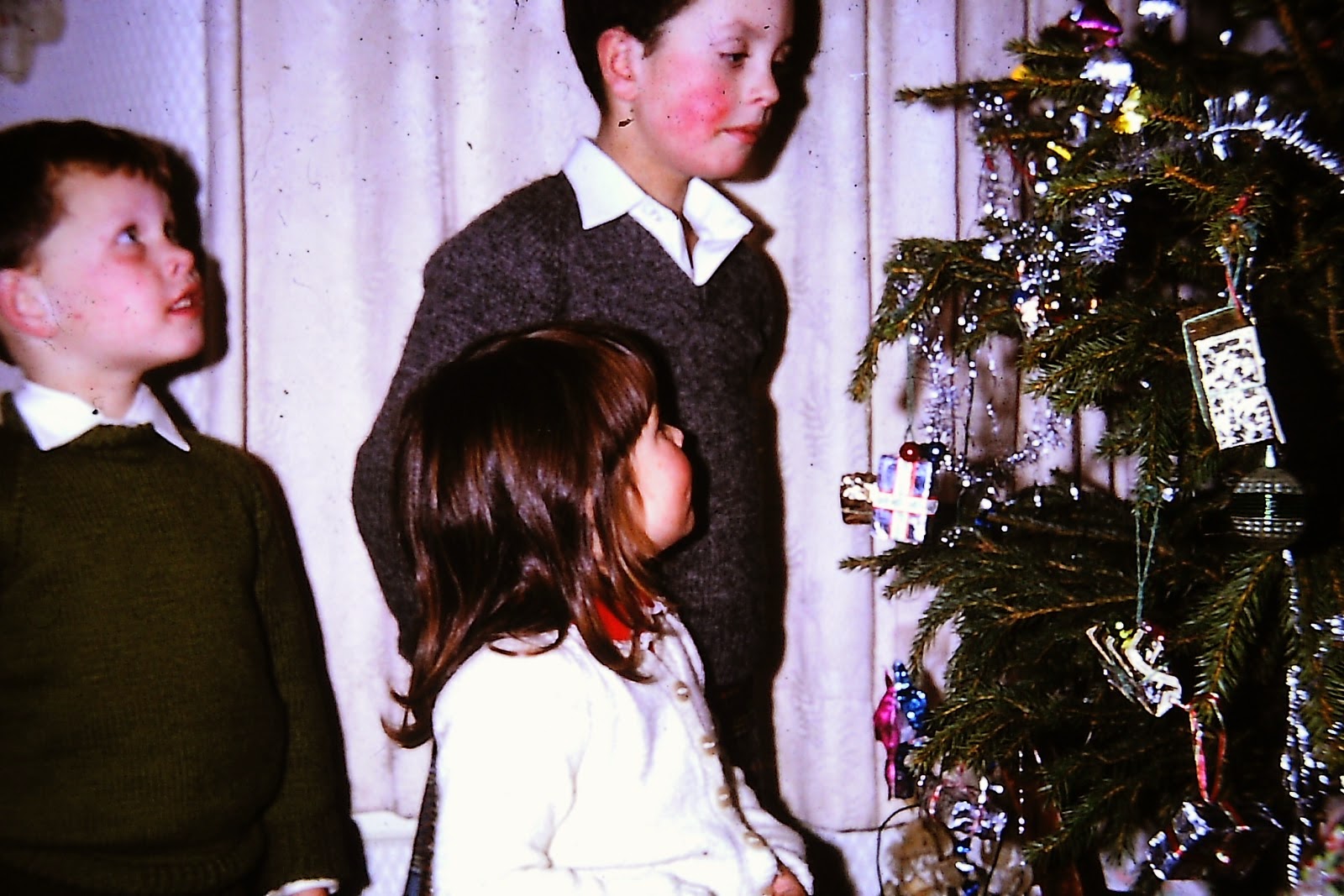 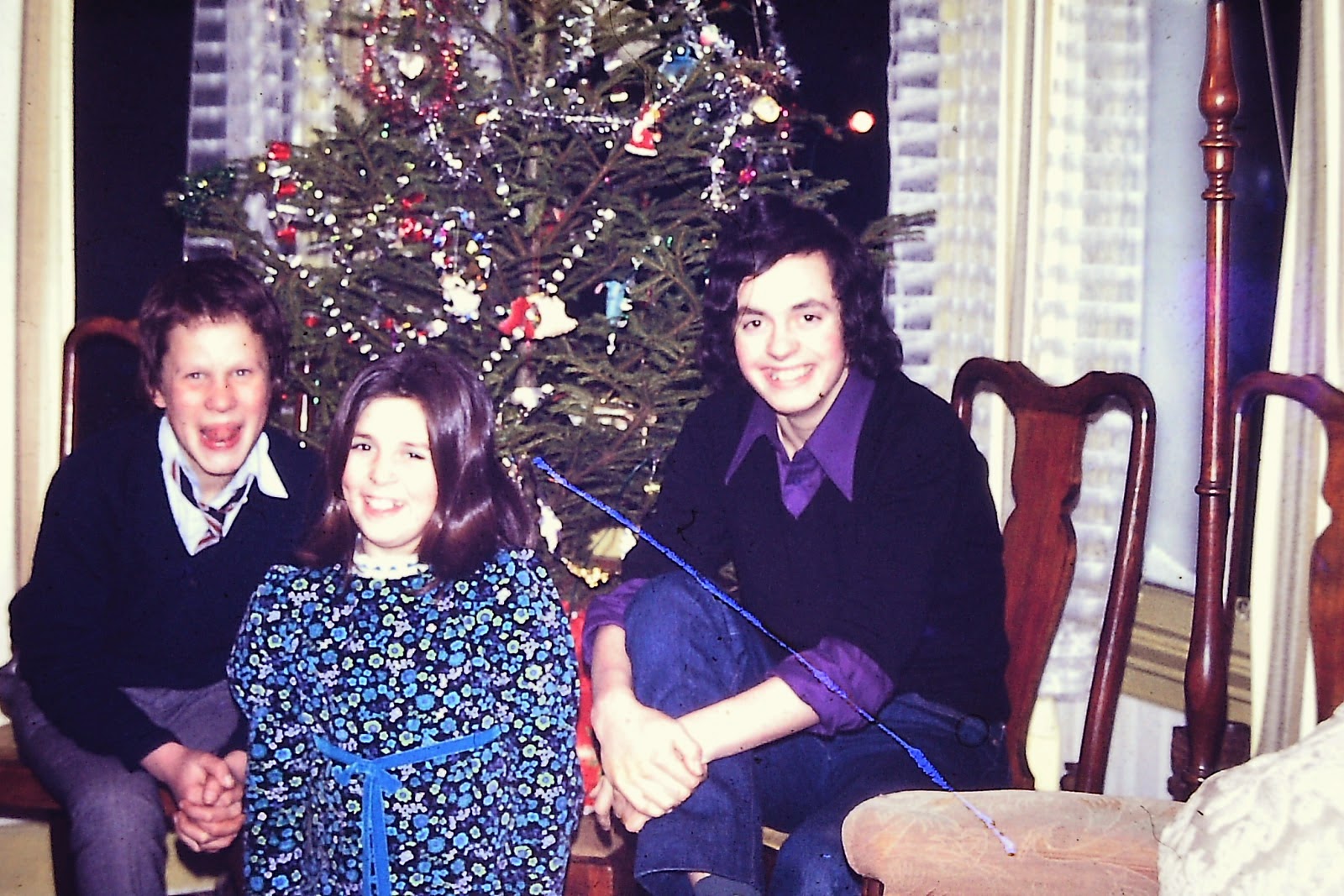 After the Queen's broadcast, a highlight for me was to sit quietly in the Smoking Room at the front of the house. This was the front room, which was a fascinating room to be in because it was full of antiques, paintings, glassware, snuff bottles and old French clocks. I sat on the big old sofa alongside my grandfather, whilst my great grandfather and father sat on the large squishy chairs. There was a large old gramophone come radio cabinet in the corner and a Christmas tree in the bay window. It was here that the men retired to enjoy the home-made sweets which our grandmother made annually for Christmas-marzipan and walnuts, peppermint creams; fudge et al. Most of all I liked when the men enjoyed a cigar. I loved the smell of the cigar smoke. It’s a smell which immediately transports me back through the mists of time. 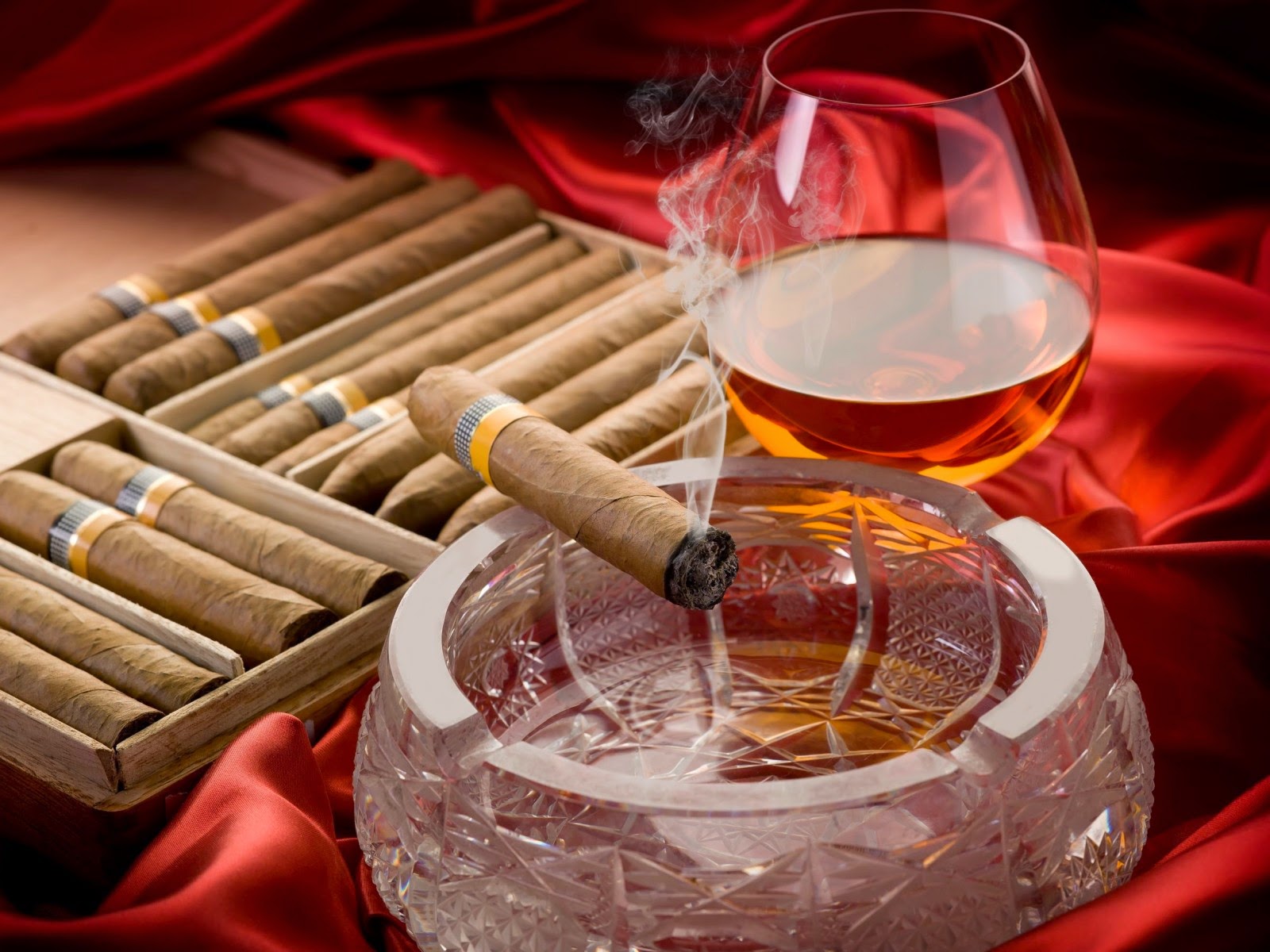 I loved sitting quietly, listening to my great-grandfather, grandfather and father talking and conversing. I always kept very quiet and tried not to be intrusive in case I wasn't allowed to stay. And, as the light outside slowly began to fade and darkness fell and the street-lights flickered on outside and then we switched the Christmas tree lights on. The lights were a novelty as we didn’t have them back at The Stair at 6/2 Oxgangs Avenue. In that room, surrounded by three older generations, I felt part of a line going back to Victorian times.  I also felt warm, secure and at peace. I didn't want these moments to end and savoured the hour or two before someone would look around the door to say that ‘Tea was now being served up and would the men come through and join the rest of the party.’

We'd all trot through to enjoy some fresh cut bread, salad and John West salmon which was a luxury item in the 1960s. There would also be a variety of shortbread, Christmas cake, mincemeat pies and for the gutsy perhaps seconds of trifle and cream. 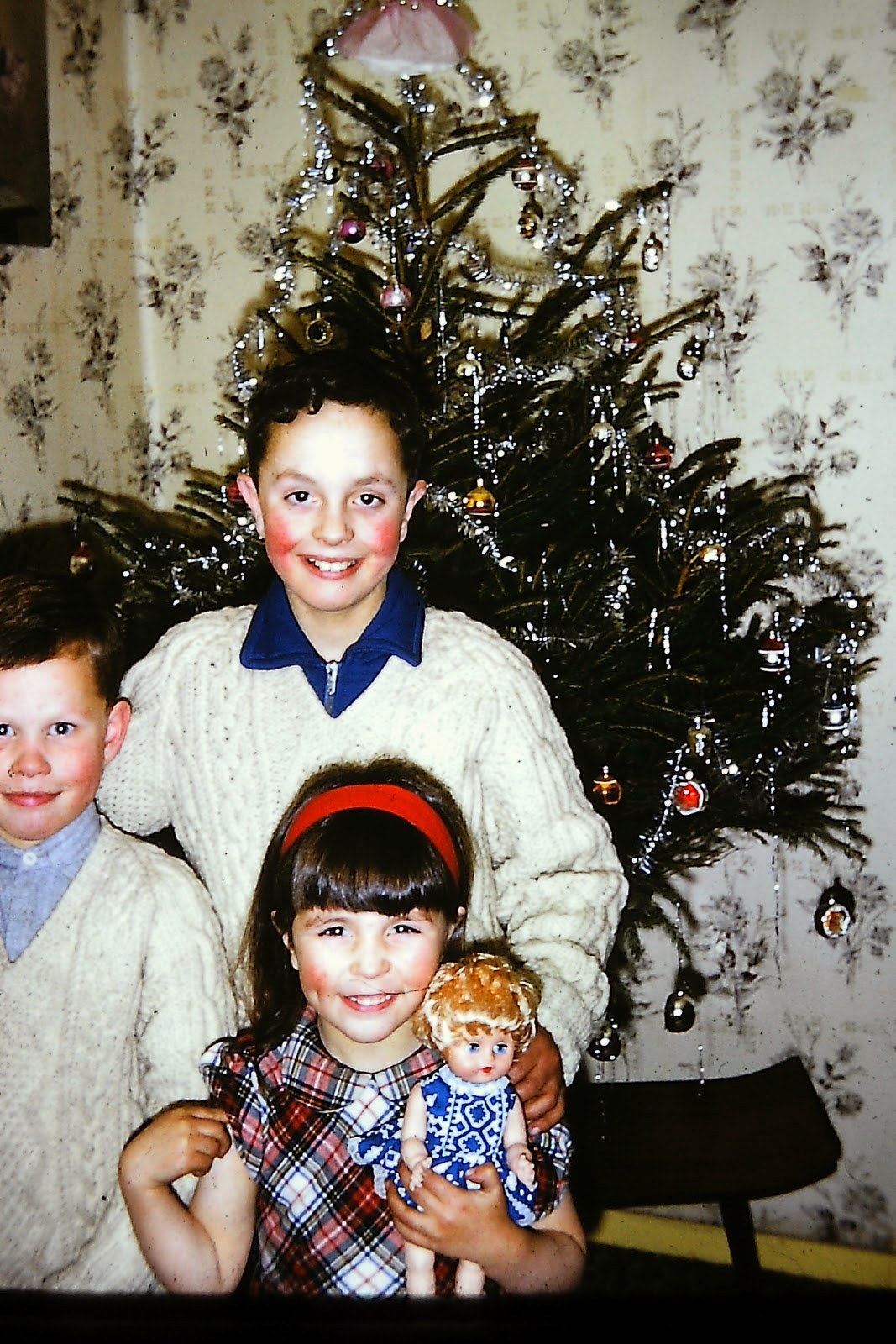 By then a good fire was blazing in the grate and one of the nice things about Christmas Day, compared to our Sunday visitations, was that we got to stay on a little longer into the evening. Our grandfather would give our great-grandparents a lift back home to London Road, Dalkeith, before then returning the seven or so miles back to Portobello to give the Hoffmanns a lift back home to Oxgangs Avenue and The Stair. It was of course a stark contrast coming home to 6/2. The house was quiet. It was cold, but slightly more inviting than usual, because the Christmas tree decorated the corner of the living room and we had the pleasure of going back to our presents.