Being Entrepreneurial No 2-The Chippy

One of the most extraordinary episodes from life at The Stair was when Ali Douglas; Paul Forbes; Iain Hoffmann and I ran a chip shop from our bedroom window. Extraordinary as it sounds it's absolutely true! 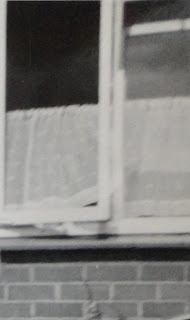 During one summer in the very early 1970s school lunches were held at Hunters Tryst Primary School. Perhaps this was a pilot, because I don't recall it being held before or since. When I worked for a Local Authority Education Department during the nineties and noughties under the Scottish Government's New Community Schools' initiative we were involved in something similar which incorporated this innovation-aye there's nothing new under the sun. 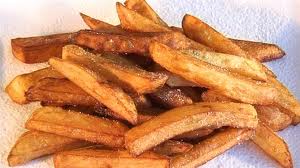 During that long ago summer all the kids from the local Stairs were soon complaining about how poor the lunches were. I did some lateral thinking-Many of the kids have got lunch money-school lunches are crap-can I provide an attractive alternative, that would beat the competition, make some money and allow us to have some fun too? Management gurus, beat that for a definition of marketing!

Our mother, Mrs Anne Hoffmann was out working in the Civil Service, so we had the freedom of the house. Our sister, Anne, who would have been sensible and rightly informed our mother was away for the summer staying at relatives who lived in Edinburgh's New Town. We therefore had the run of the house. So, we had surmised we had a kitchen for cooking; we were situated on the ground floor, so we could use our bedroom as the shop-the window could be opened and used as a serving hatch; and all the meanwhile the back garden was where our customers would gather.

Much of our initial stock was purchased using the largesse of our unknowing mother. Part of our household duties were to buy in the week's messages-we had carefully planned this and one Friday bought a large sack of potatoes. Following or should I say, preceding, Malcolm Gladwell and Dr Inyegar we limited our customers' choices-it was either chips or mince pie or mince pie and chips!

We had reasoned that the pies had to be purchased fresh so we bought these in each day at The Store. Jock at the butcher's section didn't know what hit him when we bought twenty mince pies on Monday morning. Aye we're hungry boys, Jock! And the following day, Aye, real good pies Jock-we're back for more! And then on Wednesday it was Jock's turn, You'd think you laddies were running a pie business! An embarrassed titter from us. On Thursday, Jock says, Well you don't look any fatter boys. Come Friday, neither Jock or I said anything-we were both too embarrassed. Then I remembered the weekend was fast approaching...Ah think I'll gie the pies a miss tomorrow Jock, so dinnae order in ony extra for me! 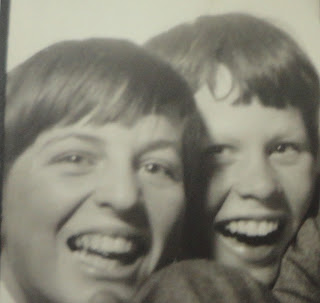 Following  good business organisation theory we separated out each aspect of the business according to our strengths-Ali Douglas peeled the potatoes; Iain ran the kitchen and the cooking-he'd been frying Sunday breakfasts since the age of six; Paul served up the suppers-by the way we'd also bought greaseproof paper at The Store too and had saved up a ready supply of Daily Express; Sunday Express; Sunday Post; and Evening News newspapers for wrapping up the suppers. 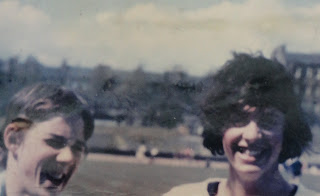 My tasks meanwhile were to drum up business; form an orderly queue in the garden-the queue was snakelike; encourage secondary spend-we'd bought in lots of small sweets which we sold for a penny each; and last of all I handled all the cash transactions at the bedroom window.

To add to the authenticity of the venture we'd ordered in from Mrs Anne Hoffmann's catalogue a toy plastic register till, which actually worked and did the business-it made a very satisfying ring each time a transaction went through.

And of course and again ahead of the theorists we knew the importance of a relationship with our customers. I tried to ensure I spoke to all our customers in the queue-taking their orders in advance; letting them know how long it might take before they would be served; and encouraging them to buy a few penny sweets. I think we even allowed them to use our loo!

Paul meanwhile with his infamous wit was excellent in a serving capacity-not only did we do salt n sauce, but there was a choice-brown or tomato; and there was pepper and vinegar too. According to my diary, we were making 17/6 (seventeen shillings and sixpence) each a day-and it was braw fun.

Once we closed the shutters for the day the four of us made an excellent job of clearing up and completely airing the house to ensure Mrs Anne Hoffmann didn't find out. Of course, she did, but it was well over a decade later. She had been sitting on a Number 16 bus speaking to someone and reminiscing about the past-Mrs Hoffmann, do you remember the chip shop the boys ran one summer? The what! Aye, the chip shop-bloody good chips they were too!

I received a call from my mother that evening!
Posted by Peter Hoffmann at 5.12.12

What a great memory Ian Hoffman. Coming from Oxganga Gardens I remember witnessing with envy the way you guys set up a wee athletic competition around your blocks. Me my brother Ian worked on the trolley milk in Bruntsfield and Morningside and you had to drop a carton of milk at least once. Big stairs when you were young. Myself I was on the electric milk float for a couple of years. New Ali Douglas and Derek Ramage and I think a couple of girls from yours stair.
Swimming BBs lots of good memories well captured. Cheers Keith Farquhar in London.